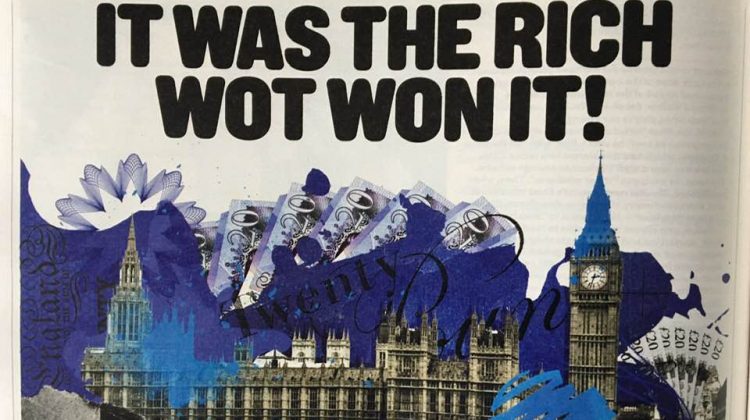 A new economic and social order is being born. We have to make it an egalitarian one

The economic tsunami engulfing the world is like nothing experienced in our lifetimes. The scale of damage and numbers affected are almost impossible to comprehend; as is the impact on our individual and collective livelihoods, and the future of the global economy, UK and Scotland.

The UK economy could contract by a staggering 35% of GDP in the second quarter of this year. Already 2.1 million people are unemployed – the highest rate in 24 years. At the same time the Treasury have estimated that the UK deficit – the gap between what the government takes in revenue and what it spends annually – could rise to £516 billion as the country experiences its worst recession in 300 years.

The US economy is in meltdown. The now nearly 39 million officially unemployed rely on the most ungenerous welfare system in the Western world; with millions more facing hardship, uncertainty and worries about their future prospects.

However in this world of economic turmoil some people remain untouched, and think that the only change needed is to quickly end the lockdown and return to the old ways of working.

Step forward the publication last weekend of the Sunday Times Rich List which first began in 1989 at the height of Thatcherism. The Rich List has become even more a celebration of the worst excesses of our times and humanity – of the super-rich, ostentatious wealth, asset strippers, tax dodgers, outsourcers and non-doms.

Robert Watts, The Rich List editor, unapologetically states its philosophy: ‘Many people will continue to consider the super-rich gaudy and outrageous, their great wealth ill-deserved.’ His case for the defence is that ‘even these sceptics may be prepared to tolerate the 0.01% for the greater good of job creation, higher tax receipts and economic growth.’

There is no insight in the list into the corrosive effect of the wealth of this elite and how they damage politics and government. A section on politics, the wealthy and 2019 election brazenly entitled ‘It was the rich wot won it’ deliberately invokes The Sun’s claim about the 1992 election and John Major defeating Neil Kinnock ‘It’s the Sun Wot Won It’.

Watts et al estimate that £40.4 million was given to UK political parties in 2019 by rich donors; £35.5 million from the 50 biggest donors: £24.9 million to the Tories and £5,000 to Labour. Two of the writers – Nick Rodrigues and Alastair McCall – claim that this picture is a good state: ‘Taken at face value that could appear to be a healthy financial commitment to our political process, a vote of confidence in our democracy’ before acknowledging that there might be a downside prompting ‘the rather more disquieting question as to what return is expected on that investment.’

The UK economy’s stress points and weaknesses have been in many places shattered by the pandemic, and 6.3 million employees have been furloughed with many unsure whether they will have jobs to return to. Thousands of companies have been reduced to zombie entities with their financial balance sheets torn apart offering little prospect of returning as successful businesses.

Conventional economics and politics will continue to insist that they have the answers for life after the virus. Already the Treasury estimate of a £516 billion deficit produced the usual government policy solutions such as a two-year public service pay freeze and abolishing the triple lock on state pensions.

The forces of reaction are galvinised by the fact they were able to impose a decade of austerity and use the banking crash as a pretext for cutting public spending. In significant parts of the Tories many see this crisis as a further chance to refashion government and public services; stripping the state, regulation and redistribution back to the minimum.

Such advocates are often gung-ho Brexiteers who are sanguine about a ‘No Deal Brexit’ on December 31st and the UK leaving the transition phase with no trade deal. The logic for this is that the UK is already going through such huge difficulties so why not get all its potential problems over in one go. This irresponsibility is coming from senior representatives of the governing party, illustrating how far the Tories and British politics have fallen.

The status quo is broken. The international order of post-war capitalism and the neo-liberal order that followed it are shattered. Radical change is coming which will either be reactionary and regressive attacking the rights of working people, or calling time on the privileges of the elites and the existing orthodoxies. What might the latter kind of change entail?

First, corporate governance needs a radical overhaul in the UK. Companies should not be able to make major decisions about jobs, investment and ownership without consulting and involving workers. We still live in an age with firms as far removed from economic democracy as at the height of Victorian Britain with employees treated as commodities.

Second, government emergency loan schemes for firms are vital, but many companies are becoming overloaded with debt, and this should be converted into public stakes – democratically run by employees.

Third, the forces of finance capitalism have to work for us – not us for them, and that entails democratising, making transparent and bringing them fully into the light of the global economy. The UK is the leading exponent of tax havens in the world, supporting the arrangements of the Channel Islands, Isle of Man, and British Overseas Territories such as the Cayman Islands; calling time on this would be a major progressive advance.

Fourth, is managing the debt bill run up. This is an opportunity as well as a challenge with interest costs on debt at a historic low in post-war Britain meaning that servicing debt has never been more affordable. The Resolution Foundation estimates that interest costs will take up a smaller share of tax revenues by 2024 than was expected in the recent UK budget with The Economist pointing out ‘not only will new borrowing attract a lower rate, but as existing debt is refinanced the cost of servicing it will fall, too.’

The UK has had huge debt before – 250% of GDP in 1945 at the end of the Second World War finally paid off by Gordon Brown in 2006. Similarly the UK decision to abolish the slave trade in the British Empire in 1834, and to pay slave owners compensation (at what amounts to £16.5 billion in 2013 prices) was only paid off in 2015, over 180 years later, illustrating the length of time over which government debt can be repaid.

Understanding public debt means rejecting the pernicious notion of household economics – that governments have to balance spending and revenue – propagated by Margaret Thatcher. The global economic historian Adam Tooze demolished this premise, arguing that household economics are a falsehood: ‘If we are our own creditors, are we not also our own debtors – master and slave at the same time?’. Yet even this circularity misses that debt is about class and distributional consequences, with historically government debt being held by the upper and middle class of rentiers – as a sure way of making money.

Finally, government can embark upon, as it did after 2008, quantitative easing which pumped £645 billion extra into the economy and was mostly used to inflate asset prices. A People’s Quantitative Easing was considered by Corbyn’s Labour at points, but now could be used at a time of ultra-low borrowing to begin a major investment programme into infrastructure and address unemployment.

This doesn’t go far enough in challenging economic orthodoxy and we need to raise our gaze from the national to international change. First, there is widespread public support across the globe for an economic recovery that is environmentally sensitive. A recent international poll showed that two-thirds of global opinion wanted climate change central to any economic recovery post-lockdown, ranging from 81% in India, to 80% China, 66% Brazil, 58% UK and 57% in the USA.

Second, Sovereign Wealth Funds manage £8 trillion of assets and 10% of global GDP. A campaign to get these to only invest in ethical, environmental investments – as the Norwegian fund does – could have huge global benefits.

Third, the international governance of the planet is bust: a point which the disaster Presidency of Donald Trump has only underlined, confirming the bankrupt nature of the post-Bretton Woods, G7-G20 summitry. Putting back together a new international settlement that recognises the decline of the US and Europe and rise of China and Asia is not going to be easy but we need it sooner not later.

All of this brings us to the nature of the British state and its role in the global order. For all Keir Starmer’s parliamentary debating skills the Labour Party is unlikely to come up on its own with a radical programme which breaks with the present British state and recognises the problem it has become.

We are living under the shadow of a neo-liberal state – one which in this crisis has in terms of England pursued excessive centralisation, a host of vertical relationships bypassing the local, and handing over management of parts of this crisis to corporate outsourcers such as Serco and Deloitte.

In Scotland we live daily with the consequences of the British state, and there is only so far that the politics of competence and managerialism can get the Scottish Government. For some the height of our ambition is at best a Scottish version of ‘little Britain’ circa 1945-75, or even worse, the continuity independence of the SNP Growth Commission fronted by former SNP MSP Andrew Wilson.

The first of these: the managed capitalism of the immediate post-war era cannot be returned to, while the second is blind to the pitfalls of finance capital led economics and short-termism which have so damaged the UK economy, aspiring to create our own home grown version of it in Scotland.

The economic orthodoxies of the Growth Commission are based on a world fast disappearing before our eyes. It not only isn’t very attractive, it is increasingly unviable and unrealistic. But so too for the moment are centre-left politics in many developed countries. Keir Starmer’s Labour has not yet said anything distinctive during this crisis, beyond harrying the government and forcing U-turns on families of migrant workers and migrant workers paying for NHS services.

Change is in the air. Joe Biden’s uninspiring campaign to become US President which pre-virus had no real theme and was explicitly a call to return to the good old days of pre-Trump has caught, relatively speaking, a bit of fire. Suddenly the Biden agenda is addressing the structural inadequacies of the USA painfully revealed by COVID-19: the lack of health provision, economic security and long-term planning. Many of the countries which have done best tend to be small, cohesive and social democratic: Denmark, Norway, New Zealand.

Time is running out on the human race embracing progressive change given the scale of environmental damage. Writing in the New York Times this week Farhad Manjoo argued that the US – and by extension the UK – could not afford to squander another crisis the way they had the 2001 9/11 attacks which led to years of Middle East war and turmoil, and the 2008 banking crash which produced austerity. Unless we learn from past mistakes we will face in Manjoo’s words a ‘coming hell’.

To bring about change we not only need ideas and the confidence to defeat the forces of reaction; we have to organise and mobilise, and remember that the Beveridge Report and Roosevelt’s New Deal did not just emerge from on high but were related to social movements and organised labour. As James Burnham wrote then: ‘No theory, no promises, no morality, no amount of good will, no religion will restrain power. Only power restrains power.’