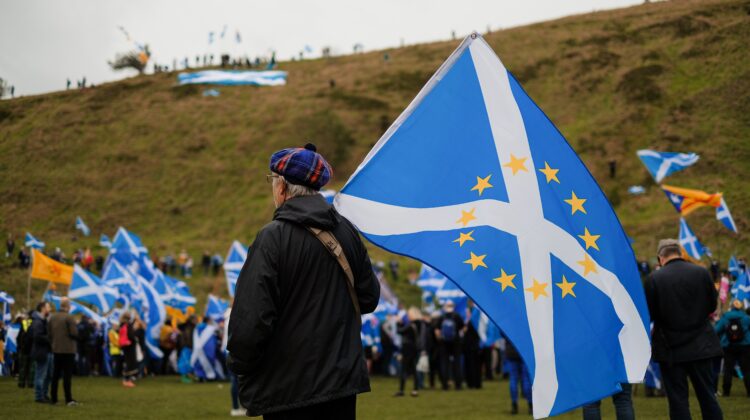 Last weekend the world marked 20 years since the 9/11 attacks, while many of us were absorbed in the birth of a new British tennis star, Emma Raducanu, as she sensationally won the US Open on Saturday evening at the age of eighteen. There were also the rival attractions of the annual conference of the SNP, this year held online, and the inaugural conference of Alex Salmond’s Alba Party in Greenock Town Hall.

Alex Salmond and Nicola Sturgeon were once the closest of allies; two politicians who by their differences and complementary skills brought out the best in each other in government and in the 2014 referendum. All that now seems a world away. After Salmond resigned as SNP leader, following the 2014 vote, Sturgeon became leader; Salmond faced trial on charges of sexual misconduct, was acquitted; and then set out to chart a new political path as head of his own party, one which brings him into open conflict with Sturgeon.

Watching the proceedings in both, Salmond evidently still has some of the skills that took him to the top. He has presence, the gift of a line, charm and charisma. But it is all diminished and an echo of his former self: his conceit in his own talents is now even more obvious – and glaring, considering his record and lack of any humility or contrition following his trial and the allegations he faced (of which he was found not guilty).

Sturgeon on the other hand leads a government, has affairs of state and a pandemic to deal with, and an entire array of advisers and support staff to assist her and her colleagues. There is much more going on for Sturgeon in presentation and politics, along with the need to manage complex calculations about the nation and its choices. It is much simpler for Salmond.

Alba offers us Salmond uncensored, freed of that protective layer of advice which surrounded him in his 20-year stint as SNP leader. This new Salmond is even more convinced of his political touch and genius, but in Alba is now not supported by the likes of key advisers such as Kevin Pringle and Geoff Aberdein, but rather by a group of people who believe in him unconditionally some being sycophants and others on the fringes of politics. The party has not shown any box office appeal yet  – winning a mere 44,913 votes (1.66%) in the recent Scottish elections on the regional list, and no seats. It has set big store on next year’s local elections but has yet to stand a single candidate in a local by-election.

The long damage of the Salmond scandal

There is a deeper set of issues in the Salmond-Sturgeon powerplay. This has been a drama and tragedy played out in public for the past three years that has dominated Scottish politics, the SNP and the media, and taken up emotions and bandwidth which could have been used on things more constructive.

Having just read and reviewed Break-Up: How Alex Salmond and Nicola Sturgeon Went to War written by David Clegg and Kieran Andrews for Bella Caledonia it makes you wonder where such dramatic, difficult events leave the main protagonists. The book in compelling detail paints a vivid picture of a Scottish Government with a civil service that at its top looks amateurish and dysfunctional, and where no one ever seems to take responsibility for the most inexcusable mistakes.

This is matched by an unhealthy culture at the zenith of the SNP where Sturgeon effectively runs an administration via a mixture of command and control, centralisation and micro-management. This can work for a time and has shown its positives in her sense of public duty during the pandemic, but offers little chance of setting a strategic direction, is exhausting and self-defeating, and is not really leadership or government but administration.

Combine this with the cumulative effect of the Salmond scandal and we have a tired, traumatised government at the very top which has been left in a state of bewilderment and incomprehension at the saga of the past few years, the betrayal many feel at Salmond’s actions, and their anger at his subsequent war of attrition against them.

There is a profound personal dimension to this. Sturgeon must feel an existential loss at losing the man who was not only her ally, but her mentor, who helped influence and shape her political views. She even said of Salmond that she felt the ‘betrayal’ so deeply because this was ‘the most influential and important person in my adult life’, after her parents and partner: ‘Somebody that I loved, on a level.’ What kind of elemental hurt does this produce in someone and how do they live with it and carry it? And how does it then affect how they see the world, professional relationships, and issues of trust?

What kind of anger and resentment does all this produce in Salmond? This is perhaps easier to gauge as he has on occasion shown his fire and fury at being held to account for his actions – a strand that consistently runs through a certain kind of man of privilege who thinks that rules and answering to them is for other people particularly in the arena of sexual ethics and misbehaviour (another example being Julian Assange). He is out to rewrite himself into the story, namely, the story of Scotland’s cause of independence. But this is the polite version. In raw emotions, he is out for personal revenge and to reek havoc on the people who he believed conspired to bring him down – centre stage being Sturgeon.

Fundamentally, what we have witnessed is an epic psychodrama between Salmond and Sturgeon that involves rival camps and followers, others forced to pick one side or another, and a host of lifelong friendships torn apart and ripped asunder, with all the disappointment, heartache and hurt that must entail. The potent, powerful emotions and feelings this will cause for many – most of whom are all still active in public life – is something we need to consider for their well-being and health, and the continued influence and power they still have. As things stand this emotional landscape does not leave any of the leading figures in a good place.

At a more mundane level the differences between the two gatherings at the weekend were worlds apart. The SNP’s was online and involved some serious debates with potentially real consequences on a range of issues – with delegates for example passing a motion critical of the government supporting a national energy company. There were also significant dissenting voices and debates on the timescale of removing nuclear weapons from an independent Scotland.

Alba on the other hand had some echoes of the SNP when it was a smaller force in the 1980s. There was an absence of irony in a party posing itself as the champion of women’s rights and embracing the phrase: ‘Women won’t wheesht’ on merchandise (one associated with women’s rights campaigners in the debate on trans rights) without any cognisance of Salmond’s actions and how he is perceived by the public – even being called a ‘sex pest’ by his own defence lawyer Gordon Jackson.

At the Alba gathering on Sunday Salmond revealed he had commissioned the combined talents of Robin McAlpine and Stuart Campbell of ‘Wings Over Scotland’ to produce a new version of the latter’s hit in 2014: The Wee Blue Book which made the concise case for independence and was distributed free to thousands of voters – now to be called The Wee Alba Book. That, combined with the endorsement of Alba by Tommy Sheridan, leads to the conclusion that for all the claims of being pro-women’s rights, part of Alba is about a certain kind of man who believes completely in their talents, lacks self-doubt and boundaries, and does not take prisoners in the combative way they do politics. This is the politics of the faithful and unlikely to have much appeal beyond it and with undecided voters.

Salmond pitched his tent, differentiating between the SNP in office under himself and Sturgeon. He talked glowingly of life in Salmond’s Scotland, quoting Labour’s George Foulkes comment about the SNP in his time ‘delivering better public services and doing it deliberately’ and contrasting it with Sturgeon – calling her record ‘at its very kindest mediocre’. It was audacious, but in many respects was just an outlandish example of what Boris Johnson is trying to do with the Tories down south: rebrand himself and distance himself from ten years of Tory austerity and make it about his mandate. Salmond is trying it in reverse and with bitterness, and while it won’t completely work he is kicking at an open door in criticising the record of the current administration.

This saga has transfixed Scotland in recent times and its pent-up feelings still consume and define some of the main players. There are specifics to the Salmond scandal – the kind of man and leader he is, how he drove himself and those around him demanding total commitment, his blurring of boundaries, and his unacceptable behaviour with a range of women he worked with in the civil service and SNP.

But there is a wider canvas too about power, gender, relationships and trust. The SNP have in recent years in office become a court party, defined and run by a narrow insider class of people who have known each other for decades. It is this way of doing politics and government which came asunder in the Salmond affair and which none of the main protagonists and institutions want to reflect upon. This is the same kind of politics which produced the hubris and tragedy of Blair and New Labour, the illegal invasion of Iraq and the 20 year ‘war on terror’. It is a politics prone to excess, over-reach and misjudgement.

There are deep wounds at play at the top of the SNP, Scottish Government, and in Salmond’s Alba, and we need to bring this hurt, anger and confusion out into the open to learn from it, do politics and leadership better, and not leave so many people, including the women complaints who are central to this, feeling so disrespected and used by people on all sides for political gain.

Political scandals tell us a lot about what people regard as important, the values and norms that we choose to live by, and in this case do not shed a positive light on Scottish politics and society. This episode and the long lingering afterlife cannot be wished away and nor can we just pretend none of this ever happened and go on as before. Somehow we have to learn, and recognise the failings of too many institutions, cultures, processes and people. And stand against those who abuse their positions of power and influence, behave in sexist and misogynist ways, and openly have a disregard for human dignity and justice. We all deserve better.