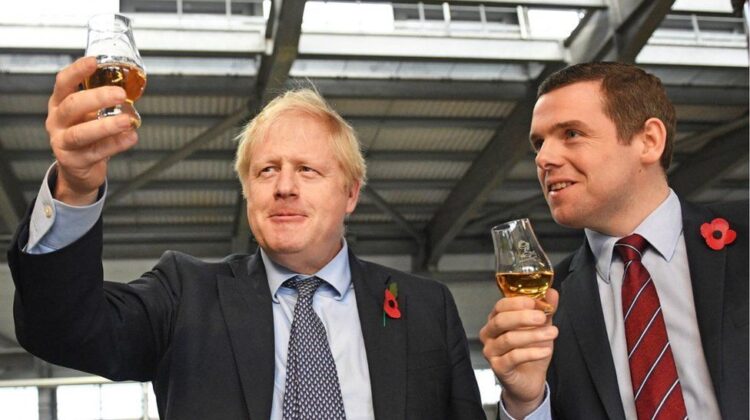 Boris Johnson’s continued clinging on as Prime Minister and leader of the Tory Party is an undignified mess, a new ethical low for the Tories and moral stain on the reputation of Britain.

Tory politicians across the UK now have to publicly pretend that they live in an Alice in Wonderland world where upside down is the right way up, and Johnson’s never-ending speel of lies is not called out but presented as fair, accurate comment.

Thus Tory politicians cannot admit basic truths including that the English crime rate is going up after Johnson in the Commons said it was going down, or that Johnson’s despicable smear on Labour leader Keir Starmer was nothing but a debased conspiracy theory from the dark corners of the ultra-right world. They cannot even bring themselves to say that, if Johnson is found to have broken the law that he made and imposed on people, he should immediately resign as PM.

As Johnson corrupts and corrodes everything he comes into contact with like some virulent poisonous chemical as he has his entire adult life, one group of Tories have managed to take a stand against Johnson and his lies and lack of any moral principles and virtues. Step forward Scottish Tory leader Douglas Ross and the Holyrood group of Tory MSPs.

Ross has struggled for traction and cut through since he became Scottish Tory leader 18 months ago. It is a tough act upon which to make a good impression. But some previous Tory leaders other than Ruth Davidson brought more to the table than this – whatever your politics. Annabel Goldie brought an aura of “everyone’s favourite auntie” which did not carry through into votes. Even David McLetchie had something going for him with his parliamentary skills contributing to the resignation of Henry McLeish as First Minister.

Ross taking a stand calling for Johnson to resign was a risk but inaction would have been worse. It looked initially as if he might be able to gain from the Tory troubles – particularly when he was called by Jacob Rees-Mogg “a lightweight” declaring the Secretary of State for Scotland Alister Jack “a much more substantial and important figure in this.” This followed Michael Gove having a dig at Ross: ”My initial response is he’s in Elgin and the national Tory leader is in London.”

The trouble for Ross and the Scottish Tories is that Johnson is not going anywhere soon. Instead, to all intents and purposes he is digging into his Downing Street bunker for a siege. Now this may be spin and the Met report may blow him out the water. But don’t count on it given the history of the Met, Johnson and the spin operation already in full swing to say that Fixed Penalty Notices cannot overturn an election and overthrow a PM.

We even have in this torturous tale Tories telling obvious porkies to add to Johnson’s as if we weren’t suffering enough Tory lies. We are being spun the bunkum that Johnson’s mandate from voters from December 2019 is some kind of popular contract that allows him to do what he wants until the next election, which will then be the Tory approved point where voters can hold Johnson accountable for his actions. This is deliberate deception in trying to make out that the UK is a presidential system, when it is a parliamentary democracy and the current government’s legitimacy comes from commanding a majority in the House of Commons – which could vanish at any point.

The longer Johnson survives the more embarrassing it is for Ross and the Scottish Tories. It does not matter for them – or aid them in the slightest – that Johnson is a political corpse and will be gone at some point in the near-future. That could be the end of this year; or if he survives a Tory vote of no confidence as every Tory leader has bar the hapless Iain Duncan Smith, well into next year, the rules dictating you can only bring such a vote once a year.

Boris Johnson’s survival shows that Douglas Ross and the Tory Holyrood group do not matter in Westminster Tory circles. This is not a great advert for their relevance and influence – or of how their English colleagues view Conservatives in Scotland.

They all lose from this impasse. It makes the Holyrood Tories appear irrelevant and Ross “a lightweight”. In fact it makes the former appear as a bunch of nonentities – who cannot run a daily campaign against Johnson in the way former leader Ruth Davidson can cut through and take a stand.

Meanwhile that small band of Westminster Tories are in a hopeless place – some standing by their man, such as Secretary of State for Scotland Alister Jack (note to younger readers -this was once a big job held by people of stature such as Willie Ross and George Younger but that was in another political age pre-devolution). All of this underlines the divisions and hopeless position of the Scottish Tories, and the mayhem that Johnson’s disaster Premiership is causing them.

None of this is an advert for the influence and message of the Scottish Tories who face voters in local elections in May. This impasse says that Westminster Tories regard the Scottish Tories as expendable and in so doing are undermining the Tory case for the union – which does seem to be one of the long term goals of Johnston judging by his actions.

Scottish Tories have to face the prospect that only independence and full autonomy from the UK Tories gives them the chance to be heard and viewed with some credibility.

Even then if Ross and the others had a genuine Tartan Tory moment and declared themselves a fully-fledged separate Scottish operation, they would still have the problem of the English Tory Party to deal with which increasingly talks and acts like an English nationalist party. One which has given up trying to understand Scotland, Wales and Northern Ireland, or champion the union in anything but a reflexive manner.

That is a problem for the Scottish Tories for the future. For now they have to endure the long death march of Boris Johnson and his zombie government of the undead and wait for it to finally have the last rites read over it.