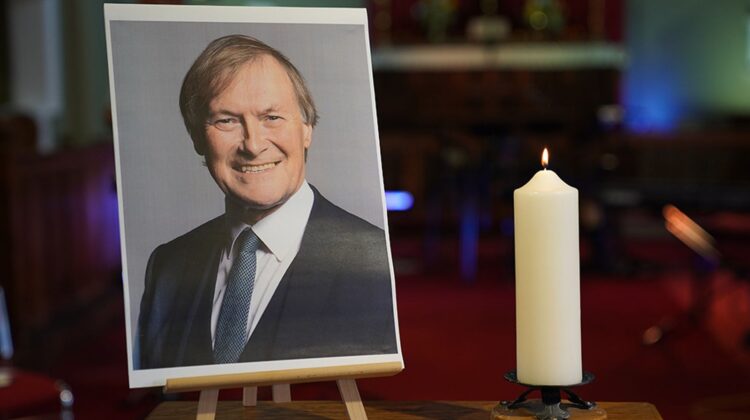 Challenging hate is not enough. We have to look at the collapse in trust

The aftermath of the murder of David Amess has rightly seen a huge public reaction and revulsion to the politics of hatred and violence and a yearning for things to be different.

Much of this has concentrated on social media abuse, anonymous trolls and the invective now commonplace in much public discourse. Yet this does not acknowledge, as Labour MP Chris Bryant has pointed, out the role of parts of the print press – newspapers such as the Daily Mail and Daily Express – in poisoning and corrupting public debate with front pages frequently calling elected politicians and judges ‘traitors’ and ‘enemies of the people’.

Hate-mongering and incendiary language needs to be challenged unconditionally from any quarter. But while many pay lip service to this, too much contemporary debate is marred by whataboutery, which always sees the other side as worse and carrying the major responsibility.

Within 48 hours of the murder of Amess, right-leaning commentator Dan Hodges pontificated that ‘it’s not OK to hate Tories’ and that too many on the left did so. Left-wing Owen Jones then produced past Hodges copy attacking Jeremy Corbyn, with a piece titled ‘Labour must kill vampire Jezza.’ No one gains from such exchanges and posturing in which the substance gets lost.

Similarly in Scotland, the excesses of some pro-independence supporters are excused by some compared to the worst pronouncements of pro-union voices and vice-versa. And as a result the rest of us suffer, as does the parameters and civility of public debate.

Underpinning all this, bitterness, anger and fury lies beyond the voices of hate and abuse. This represents a failure of the political mainstream, the main political parties, their leaderships and prospectuses in the UK, but which can also be found in other countries.

Thus while we need to police public debate, clean-up social media, hold big tech to account, and deal with the worst outpourings of the right-wing press, we need to go beyond this. We need to talk about and understand what is happening to society, and reflect on the deep-seated erosion of the fundamental pillars of democracy.

The Long-Term Breakdown of Trust

The long-term decline of trust has its roots in the perfidy and deliberate disinformation of the political classes – their lack of closure and admission; and the serial absence of accountability across several governments particularly in a number of major crises.

A direct line runs from the Iraq war, the overthrow of Saddam Hussein, ‘regime change’ and absence of Weapons of Mass Destruction – the drum beat of which began twenty years ago in the shadow of 9/11 – and the fatal embrace of Brexit fifteen years further down the line. These twin pillars define much of the harsh tone, feel and fury of what passes for politics in public sentiment outside parliamentary chambers – that comes from a belief that politicians do not listen to or comprehend voters on the big issues of the day.

The Iraq war and Brexit bookend an entrenchment of a political class view that, whether held by Labour or Conservatives, united a large part of the political elites, insider opinion and right-wing press. This viewed people as basically malleable and shapeable by the art of communications, propaganda and disinformation.

We were collectively lied to on the road to the killing fields of Iraq, a political and humanitarian disaster which tainted Blair and his apologists – Alastair Campbell, Jack Straw, Geoff Hoon – and to a lesser extent, but culpable, Gordon Brown. At a senior Labour level only Robin Cook and Clare Short emerged with any credit and integrity. And less anyone forget the entire Conservative leadership and parliamentary group were even more pro-war than Labour – Kenneth Clark the only senior Tory to oppose war.

Five years after the Iraq invasion came the bankers’ crash of 2008 which upended the entire premise of New Labour’s economic project and its Faustian pact with the City of London. Gordon Brown, architect of most of what had come to pass economically over the previous decade, was now Prime Minister. But not only did no minister resign, but no senior political figure admitted that that they had been caught out and that the mantra of ‘light touch regulation’, that Brown and company had made into a dogma, had been found wanting.

In the immediate aftermath of the above arrived the parliamentary expenses scandal of 2009 whereby the Westminster political classes across all parties and persuasions were caught being flexible in how they subsidised their lives. This was the world of ‘flipping’ properties and charging voters for all sorts of extra luxuries.

The sheer hypocrisy of a political class that presided over tearing up the post-war social contract between government and citizens, but felt it had a right to a featherbedded life of public subsidy, was not lost on the public. But only a few MPs were forced to stand down at the next election, even fewer charged and found guilty, most of who were Labour MPs including Jim Devine. And many Tory and Labour MPs felt outrage that this system of topping up their salaries was called time on.

Shaped in part by the events above came the 2016 Brexit vote, narrowly won by a Leave campaign defined by the power of ‘the Big Lie’, disinformation and a lack of responsibility. Not only was it the £350 million extra per year for the NHS; it was the Leave campaign being found guilty of breaking electoral law, being fined, and not caring one iota. Labour MP Gisela Stuart, when asked, would say in classic evasive whataboutery: the Remain side did some nasty things too, which is true but they didn’t break the law.

The damage to democracy of that Brexit vote five years ago lives on in the present, and is a sore and open wound on the body politic of the UK. We were all sold a 2016 prospectus which was unattainable – that the UK could have all the advantages of being in the EU and all the advantages of being outside; that we would have cheaper food, easy trade deals with the rest of the world, more funding for the NHS, fisheries and farming.

Where is the accountability and answerability in the UK today?

The UK of today – a country mired in crisis and incompetent government – is shaped (COVID apart) by a landscape shaped by the lies and evasions of the 2016 vote. This is a country with endemic shortages of the essentials, food and fuel spikes, empty supermarket shelves, high street chains struggling with supply chains, labour shortages and more.

What is the answer of the UK Government ministers? The people who sold us the painless Brexit of 2016 and who never stopped to tell us they would interpret the 52:48 vote as a purist Brexit – one with a rupture in relations with the EU, trade wars in the offing, and the Northern Ireland peace settlement hanging on a thread because of the pursuit of a hard edged Brexit.

They display the arrogance of a class that never has to answer for their mistakes. Brexit – their Tory mess – is always the fault of someone else like the French, Germans, Irish, perfidious judges here and abroad. And as for all the undoubted problems in the UK, the smooth, dismissive line is that the rest of the world has shortages and problems such as a scarcity of HGV drivers.

There are several common threads running through these crises. One is the limits of what passes at any time for conventional political wisdom. As serious is the serial lack of accountability. There were three inquiries into Iraq – Hutton, Butler, Chilcot – and the only senior resignations came from the BBC. No senior banker was ever charged in the UK and jailed – unlike a smaller country such as Iceland that charged and jailed a number of bankers.

As for Brexit its leading advocates, Nigel Farage apart, are all in government – Boris Johnson, Michael Gove, Priti Patel – and their insouciance and oleaginous nature has got so brazen that Lord David Frost, the principal negotiator of the Northern Ireland Protocol (which he commended as a ‘excellent deal’) is now the same person saying it is ‘unsustainable’ and has to be ripped up.

The politics of hatred scar and disfigure all of us. But so too does the hollowing out of trust, and the reducing of government and statecraft by the sheer effrontery and hard neck of an entire class of politicians who feel emboldened to lie and tell untruths every day and think it carries with it no consequences because they believe they can get away with it.

This is a low point in what passes for British democracy, government and politics. Tragic and repulsive as the killing of David Amess is – the malaise is much wider and deep-rooted than the act of a lone radicalised home-grown terrorist.

Deeper problems are to be found in how our political elite do politics and their worldview. Look at the state of present day Britain, and the consequences that flow from deceit and disinformation on Brexit and more, and the complete absence of any sense of responsibility and accountability at the top of government.

Unless we change course and bring truth, honesty and facts into public life, Boris Johnson will be just one more self-serving figure as we head irrevocably into the gutter and sewer, and much worse charlatans, shysters and serial liars come to dominate and debase public life.