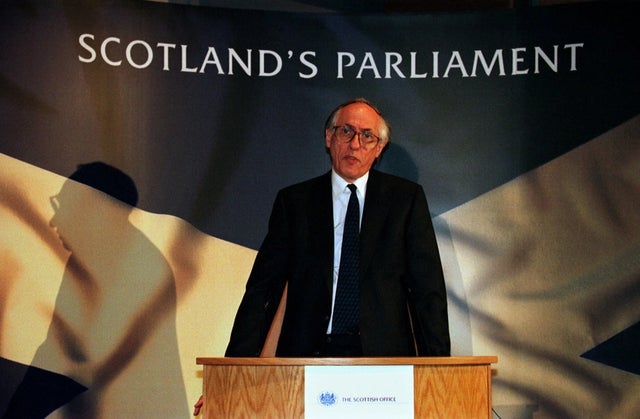 Donald Dewar and the Lost Story of Devolution

A significant and poignant moment in Scotland’s recent history comes up this weekend on Sunday, with the 20th anniversary of the tragic death of the first ever First Minister Donald Dewar at the age of 63.

Donald Dewar was a profoundly decent person, imbued with an older sense of public mission and morality, who often seemed out of kilter with the times – drawing from a deep reservoir of how the middle and professional classes used to behave. His death robbed the Scottish Parliament of leadership and aided a period of institutional instability, but even more began a series of steps that led to Scottish Labour’s long descent into near-irrelevance.

Dewar as First Minister was no natural leader, but his death removed a politician who could speak to the Scotland beyond Labour; as STV’s Bernard Ponsonby put it: ‘You would have to go back to Donald Dewar to mark a leader of genuine national standing who commanded respect beyond the Labour vote.’

After Dewar came Henry McLeish briefly and then Jack McConnell as Labour First Ministers. McLeish was only in office for little over a year and had to resign over what he called ‘a muddle, not a fiddle’; while Jack McConnell (who thinks he can comment on statecraft now and adjudge First Ministers in the midst of a pandemic) led a characterless, dour administration defined by his timidity and being feart of Gordon Brown.

The missing story of devolution and rise of independence

Something more was revealed and magnified by the death of Dewar – which he may not have provided the answer to – but no one else subsequently has even tried. Dewar’s death removed the chances for Labour to provide a positive, convincing, popular story of devolution and the Scotland it was meant to bring about. McLeish was there too short a period, McConnell defensive, Brown fixated on his power politics, and the six Labour opposition leaders who followed defined by the law of diminishing returns.

In the light of this we can now see that Dewar’s death and this subsequent failure of political leadership and imagination around the devolution project had huge consequences that still define us today. Namely that the political terrain which was opened up was subsequently claimed and captured by the SNP – at first narrowly in 2007, then more emphatically in 2011 – allowing the party to seize and reshape the narrative and bring independence in from the margins (where it was pre-2007) into being the new mainstream: a generational shift in the politics of the nation.

Twenty years on, devolution is a political project mostly unchampioned. Labour have blown themselves up in Scotland; the Tories see the union not devolution as their cause; and Boris Johnson, and the blowhard Brexit he and his allies represent, does not think about constitutional niceties such as devolution.

Yet, within this new environment which has been hesitantly building since 2014 there are concerns which need to be addressed – about the longevity of the SNP in office, about creeping system capture, the limits of democracy and accountability, and where alternative centres of political power sit, aid and nurture pluralism. And all of these matter to a politics and culture of independence which has to be about more than just pushing the argument narrowly over a winning line – aided by the obvious thought that such a limited political vision might not even do that.

Take Magnus Linklater in The Times on Monday where he surveyed the long view of the independence debate over the past 40-50 years, using Ben Jackson’s recently published The Case for Independence: A History of Nationalist Political Thought as his prompt.

Linklater observed that the influence of the titans of old – Neal Ascherson, Neil MacCormick, Tom Nairn – contributed to the backstory of the intellectual ballast and confidence of the independence argument. They aided a critique of the British state as unreformed, decayed and ancient, and of a Scottish nationalism that was modern, progressive, European and about Scotland as a modern, progressive, European country. Linklater writes: ‘All this was more than 40 years ago, but these ideas have worked into the national mood, and, with an unpopular UK Government dragging Scotland out of the EU, they are back on the agenda.’

He argues that since this influence there has been significant retreat and ossification. Linklater does not know first-hand any of the thinking on independence post-2011 – when the public debate was magnified by the SNP majority victory. Much of this thinking is cited in Jackson’s book at length – but has gone above Linklater’s head and reading of the book which underlines his superficial understanding of the contemporary independence movement.

Linklater focuses on blockages in the SNP, stating that they ‘seem incapable of holding any kind of debate that challenges the carefully controlled messages’ and further observes that ‘there is an intellectual vacuum at the top and no sign of the giants of the past to fill it’. This is both a sweeping set of generalisations about a debate, but has the seeds of identifying an acute set of weaknesses about the SNP and public life.

An interesting contribution in this terrain is James Mitchell’s The Scottish Question Revisited just published by the Jimmy Reid Foundation. Mitchell poses that this question is a ‘matrix of issues’ involving democracy, governance, identity, issues of legitimacy and trust and public policy references.

Mitchell believes that the constitutional debate has become too narrow, superficial and reduced to soundbites in the aftermath of the 2014 independence referendum. He argues that, on the independence and pro-union side,  there has been a simplistic evoking of sovereignty which is absolutist and indivisible that taken to extremes leads to the Brexit British nationalism of recent years – and which hides behind binary thinking to mask the shortcomings on each constitutional side. Mitchell believes that: ‘We should avoid the ‘winner takes all’ with one side claiming victory and imposing its views as with Brexit.’

Critically for all of us, both arguments can mask the obvious failings in our politics and democracy. Does the Yes argument really want to look around modern Scotland after 20 years of devolution and say that is the best we can we do, that this is a cohesive, fair society and functioning democracy? Do independence supporters really want to defend every aspect of the domestic status quo in Scotland – in education, health, local government – and posit that any real radical changes which transforms people’s lives has to wait until Day One of independence? That is a road to disaster: of associating independence with a stasis, system capture and the middle class professional state who have run Scotland for decades.

The Brigadoon mirage of UK federalism

This brings us to Ben Thomson’s Scottish Home Rule: The Answer to Scotland’s Constitutional Question – an argument that has been made episodically throughout Scotland’s recent political history – the call from Scotland for an all-UK federalism.

Thomson was the founder of the centre-right think tank Reform Scotland and thinks that in another referendum ‘we need an alternative to independence and status quo’ and ‘what is it to be afraid putting this to the public?’ Thomson wants to see all domestic policy come home to Scotland with an entrenchment protecting this settlement, while defence and foreign affairs remains at Westminster, asking: ‘Does Westminster have ultimate sovereignty or does Scotland have ultimate sovereignty? Can we try to imagine a situation where we embrace shared sovereignty?’

Home rule and federalism are a sort of Brigadoon chimera: appearing and reappearing on a regular basis but never in clear vision and detail. This is a distinctive, predictable pattern. At times of peril to the union federalism is raised in warm, welcoming words (the example of Gordon Brown being germane) with no plan or detail offered and Thomson’s sketchy plan is no different. Thompson says: ‘There is real discontent with the current system. 50% plus independence tells you that’.

Yet he ignores the question of who is going to politically champion and take forward this agenda in Scotland – with the Lib Dems in such a shrunken state. And he shies away from acknowledging how broken and beyond repair the UK political system is and the obstacles to reforming Westminster and Whitehall and addressing the democratic deficit in England – subjects he glosses over in his contribution.

Twenty years of devolution and thirteen years of SNP Government are an appropriate time to take stock and assess how well our politics are doing in transforming our country and the lives of people. It is in truth a mixed picture of cautious centrism and dull managerialism – whether under Labour and Lib Dems or the SNP – that lacks key qualities on how we deal with the big issues about the economy, inequality and vested interests. Mitchell takes the view that devolution has become ‘a means of preserving existing policies and institutions: a conservative (with a small ‘c’) case against Conservative (big ‘C’) policies.’

Returning to the critiques from Mitchell, Linklater and Thomson, how do we as a political community dig deeper and nurture and nourish substantive ideas, debate and radical thinking? How can we aid the pluralism of sites like Bella and encourage a culture which holds power to account in public institutions and public life?

Then there is the question of the missing Scotland and missing voices (the former the term I came up with in the indyref to explain the part of Scotland politically excluded for a generation) from our political debate. All of the voices cited above are white men – no disrespect to each of them – but we have not heard from enough women, minority communities and people who sit outside the comfortable, cosy middle class.

This matters on many levels – about how we interpret the past twenty years, understand the present and shape the future – with academic Hannah Graham observing about the stories of devolution ‘where are the women?’ and that: ‘If Holyrood is a modern people’s Parliament, who is and isn’t telling, narrating, co-editing our story?’ Our politics have been too captured by an insider class of people who have only had a narrow experience of living and working in politics and not surprisingly they seem on the evidence so far to have little interest in shifting and redistributing power in society. And then there is the missing lexicon of class and power from the SNP and mainstream politics – which has been aided by Scottish Labour’s terminal decline.

Twenty years of devolution is a story which seems to have run its course. That does not mean that independence seamlessly becomes the future. Instead we have to develop a political culture which is about more than command and control, managerialism and top down, and that requires a politics which goes beyond Parliament, politicians and political parties. Scotland has dramatically changed in recent times and become a society comfortable with the idea of independence and self-determination. We have to nurture a different politics, society and future – one which brings that different Scotland into everyday, lived reality.