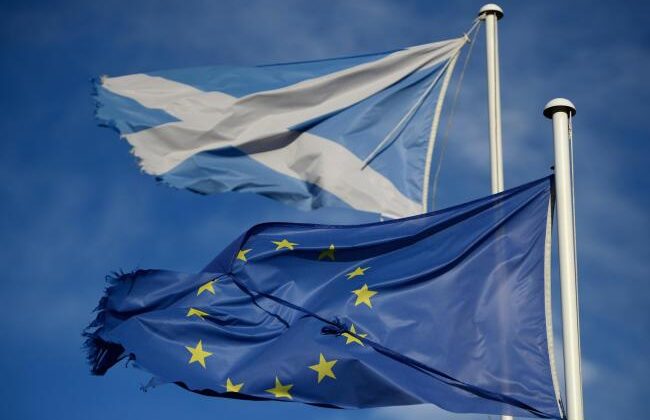 Europe puts a light on for Scotland

Remember in 2014 Scotland was told: “What is [the] process for removing our EU citizenship? Voting Yes.” Now the same voices tell us that Scotland becoming an EU member is too difficult – the supposed ‘queue’ for membership, EU terms and spectre of a ‘Spanish veto’.

Yet large parts of Europe have not forgotten that Scotland voted to remain a European nation – and part of the EU – in the 2016 vote, and still has the desire to be a self-governing EU nation.

An initiative launched last week, Europe for Scotland, has made the case in advance of any future indyref. Aimed at the EU and European institutions it makes the case that Scottish membership should be welcomed, the terms relatively straightforward, and the process timely.

This intervention first brought together just under 200 public figures – academics, writers, cultural leaders, politicians, campaigners (including myself) – from across the European continent, all 27 EU member states, and the four UK nations.

The statement addressed to the heads of state and governments of the EU27 along with EU institutions states: “Europeans must always stand for democracy and solidarity. So we call upon you to express our joint solidarity with the citizens of Scotland and to support Scotland’s democratic choice about its future.”

On Scotland and the EU it says: “Scotland deserves a different process. While it is legally part of the UK, the Scottish Government cannot negotiate with the EU. But the EU can declare that, because Scotland has long been part of the EU, should it become legally and democratically independent it need not apply as a ‘new’ accession candidate.”

It criticises the current stance of the UK Government: “When Scots voted to remain in the EU, they did so as part of the UK. Separating themselves from the UK to become a member state of the EU is a different matter. One that demands its own referendum, which the Scottish Parliament and Government have formally requested.” It concludes: “At present, the UK Government refuses to permit this. We should not stand idle while this impasse lasts.”

Why Europe for Scotland came about

The initiative was facilitated by Anthony Barnett, first director of Charter 88 and co-founder of OpenDemocracy, supported by two younger activists – German Nina Jeffer and Italian Andrea Pisauro – who made many of the connections. I spoke to all three this week, along with a selection of supporters.

Barnett described the rationale for, and different audiences, the statement was addressing: “First we from outside want to express solidarity and appeal to our fellow Europeans to feel the same, to get the European community: to realise the importance of the Scottish democratic question as a principle and the unacceptable, increasingly neo-colonial attitudes of the British Government as unacceptable.”

“The second is within the UK itself. We want to shift the debate to one of positive support for the right of Scotland to take the course it wishes democratically. There are two aspects of this. One is pushing against the way Anglo-Brits say yes Scotland has the right and then go on about the costs and how hard it will be. The second, is to get them to realise that it is still the English who are doing the disruption, it’s the English who are leaving the Scots, not the Scots leaving the English. They are simply resisting being taken down the black hole that is the British state.”

“Third, we want Scotland itself and public opinion and the broad spectrum of the independence movement to know they are not alone and we can shift the way in which politics is conducted and move on from the negativity of Brexit.”

Nina reflects on her journey: “I’ve always felt conflicted about separatism and not sure what to think about Scotland’s election in 2014. But Brexit changes everything. By being forced out of the EU, Scottish people are made to suffer the consequences of a huge decision they didn’t vote for. They are deprived of rights, investments, and part of their identity.”

Andrea observes that Brexit revealed the extent of “a deeper dysfunctional relationship between Edinburgh and London.” Not only that ”It unveils the bipartisan hypocrisy of the Westminster system – a source of democratic outrage that many Europeans feel. I think that any sincere democrat should stand up for Scotland’s right to choose its own future.”

The range of voices on Scotland is impressive. Historian David Edgerton comments: “We are asking the EU to appreciate that the Scottish people were, contrary to their wishes, illegitimately stripped of their rights as members of the European Union and to make it possible to restore those rights as soon as legally possible.”

The Irish based writer Fintan O’Toole – who has long observed Scotland’s debate – states: “The EU has to recognise that Scotland’s position is unique. It was in the EU for nearly half a century. It wasn’t expelled. It didn’t ask to leave — on the contrary, it made a very clear collective decision to remain in the EU. There’s a basic democratic imperative for the EU to acknowledge this — not just for Scotland’s sake but for the sake of the EU itself.”

Underpinning all this is the issue of Brexit and the rightward capture of British politics and the British state. The Tories aided by a fanatical fringe of Brexit believers have interpreted Brexit as an absolutist version of sovereignty incompatible with the modern world.

This has had huge consequences for the nature of the union and political appeal of unionism. By pursuing a purist hard Brexit with no compromise with the EU the UK Government is now struggling with trying to square the issue of the Northern Ireland border and honouring the Good Friday Agreement.

Barnett thinks Brexit represents a kind of “democratic impulse” and even potentially “a kind of democratic revolution” kicking against the status quo and UK political establishment. That this has subsequently been appropriated by hardline Brexiteers is unsurprising, but is not the only interpretation of the different forces at work.

Barnett describes 2016 as “a Supernova” which has released “a tremendous amount of energy now imploding in on itself”, and is contributing to “the descent into a black hole of the British state, with Johnson now fighting Cummings, a corrupt insider class, blatant disregard of the rules, the debasement of the civil service, and even plans for voter suppression to make Tory ascendancy easier.”

This European declaration is an important moment. It internationalises the Scottish question. It changes the Scottish environment, how the independence question is seen – and how it should progress. Such widespread recognition needs to be reciprocated by scaling-up action, boldness and radicalism here. Scotland has to get serious about the question of independence, and not just leave it to the SNP or politicians of whatever persuasion.

The importance of this statement can be seen in the disdain poured on it by numerous pro-union voices. Many recognise that this could be an important moment, and even tipping point, that exposes the thin nature of their arguments and their willingness to block the democratic will of the people of Scotland.

Scotland has become international. There are similarities here with what happened in the home rule campaign in the long years of Thatcherism. In December 1992 the EU Summit under John Major’s Tory Government was held in Edinburgh producing the largest every post-war march campaigning for a Scottish Parliament.

While John Major, German Chancellor Helmut Kohl, and French President Francois Mitterrand met, Edinburgh streets were filled with pro-democracy protesters, leading Kohl to ask Major what was going on and why were people protesting.

This was a significant turning point in the history of the Scottish self-government campaign: a nation seeing itself and being seen on the international stage, and thinking differently about itself as a result.

We are at a similar watershed now. Scotland cannot in perpetuity be denied its right to decide its own future and be a mainstream European nation if that is what the people collectively want. This statement comes one week before Scotland goes to the polls in critical elections, against the backdrop of the world coming to Scotland and Glasgow in November this year for COP26 to be hosted by Boris Johnson and the UK Government.

The echoes between 2021 and 1992 are obvious. Edinburgh offered a moment when anti-Tory Scotland – SNP, Labour, Lib Dems, Greens – put aside differences and stated to the world that something was amiss in democracy in Scotland. And it was a time when the power of culture and writers was given a platform that had resonance, with Willie McIlvanney describing Scotland as “a mongrel nation”.

COP26 puts Glasgow and Scotland on the international stage and if, as is likely, the UK Government is still committed to the denial of democracy will provide us with the chance to show the world the case for Scottish self-determination. It should be a moment where as wide a coalition of Scotland comes together, and draws upon culture, ideas and writers to frame how we understand our nation in a progressive, inclusive, outward looking way.

Writer James Robertson comments: “The best way writers and other artists can contribute to political debate and public discourse is to keep working. Art and culture are about who we are, where we have come from and what we aspire to.”

Fellow writer Val McDermid notes on independence and culture: “To get there, we need to harness the power of the imagination. No individual can come up with the full spectrum of our dreams and desires, and how to help them to reality. But everyone involved in the arts can help us do this by exercising their imaginations, to open up fresh possibilities for how we achieve the country we’ve imagined.”

David Edgerton summarises his thoughts with the observation: “Democracy is a matter of both legality and legitimacy; where borders are placed should fundamentally be about legitimacy, not legality.”

Fintan O’Toole says of Northern Ireland, Scotland and the EU: “As an Irish person, I think it was right that the EU made it clear that Northern Ireland could rejoin at any time as part of a possible new Irish state. That declaration did not preempt the right of the people of Northern Ireland to make their own decisions, and neither would a similar statement recognising Scotland’s unprecedented position.”

Barnett emphasises the interdependence of independence far removed from Brexit fantasies: “A small country does not gain independence completely on its own”, he states. “It needs allies, support and an international constituency. This initiative is not about undermining self-determination, but adding to and enhancing it.”

Europe for Scotland is an important intervention. It needs to be built on by its signatures and supporters, perhaps turned into a rolling campaign and organisation. What we can say is that modern Scotland and the desire for self-government has truly arrived on the international stage.

Europe for Scotland’s declaration can be found at: https://actionnetwork.org/petitions/welcome-scotland-back-in-the-eu