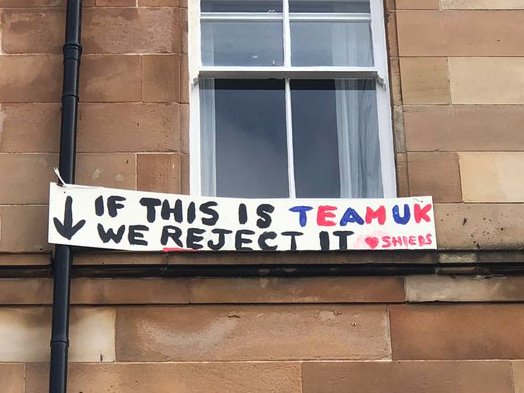 On Thursday last week Kenmure Street in Pollokshields on Glasgow’s Southside made worldwide headlines. As the forces of the British state, in the form of the UK Home Office and UK Border Agency, attempted to forcibly detain and deport two young men the local community resisted and defeated them showing the potential of people power.

On that morning a UK Border Agency van came down the narrow confines of Kenmure Street and officials swooped to detain the two young men, Lakhvir Singh and Sumit Sehdev, Sikhs originally from India, doing so to make their actions even worse during Eid. Within minutes a young activist by the name of ‘Van Man’ (who chooses to remain anonymous) from No Evictions Network lay under the van, while local resident Declan Blench who had been working from home went onto the street and behind the van, tweeting and alerting others.

Blench told The Guardian: “I put my shoes on and sprinted out. I just thought ‘You’re not going to do that in front of me’. There is due process and this is not it. I’ve never done anything like that before, so I was quite nervous. But every time I turned around there were more and more people.”

The quickfire actions of Blench and ‘Van Man’ bought time, stopped the van making its getaway, and allowed the community to be mobilised. Within minutes people started emerging from the surrounding tenements – first in Kenmure Street, then neighbouring streets. Pollokshields is Glasgow’s and Scotland’s most diverse, multi-cultural community, home to the country’s largest (and in many cases prosperous) Pakistani community; alongside the Glasgow Gurdwara, spiritual home of the Sikh community; and beyond that a rich mix of arts, culture, and younger folk – some working in places pre-COVID such as Tramway, the pioneering centre for visual and performing arts.

It is important to stress the character of the resistance. This was a local community – in all its ages, backgrounds, ethnicities and identities, mobilised and brought together by the actions of the British state. I know this first hand because this is my community and home turf. I first moved to Glasgow’s Southside nearly thirty years ago, moving into Kenmure Street, and now live one minute away. When I responded to the call out for people to make their way to protest, I was met by friends I have known for three decades, long-term acquaintances, and saw many people I have seen out and about for many years. Activist Adam Benmakhlouf reflected on the day: “I saw neighbours, colleagues, friends, crushes. I hadn’t felt so immersed in community in almost a year.”

Kenmure Street then witnessed an eight-hour stand-off as the number of protestors swelled, blocking the van and street; the van sat motionless with the two men held captive inside, and a growing police presence around the van. The differences matter and were fully on display. The police officers from Police Scotland, accountable to Scottish ministers, were on the whole polite, friendly and at ease with protestors, openly talking about how they disagreed with the Home Office actions, and that they did not have the power to stop their actions; although this mood changed for a period in the afternoon. After eight hours of a stand-off, the police informed the UK Border Agency that in the interests of public safety the two men should be released, which they were to emotional celebrations.

This is an uplifting story: of a community responding in crisis and using social media at its best to galvinise numbers. But the story does not end there. The two men have only won a temporary victory. Not only that to add insult to injury after Thursday their landlord threatened them with eviction from their flat, claiming that he did “not want to deal with immigration problems”, a threat subsequently withdrawn, but illustrating the precarious plight of many who come to the UK to seek a new home.

Thursday represented the best of Glasgow: a city which has seen itself as an arrival city for centuries for communities from around the world – Irish, Italian, Pakistani, Sikh to name the most obvious. Charandeep Singh, head of the Glasgow Gurdwara near Kenmure Street where the two men volunteered, is rightly proud of their outgoing, socially engaged reputation with an exemplary programme of outreach during COVID.

Charandeep told me: “Thursday’s orchestrated actions by the Home Office were reckless, inhumane and misjudged. The people of Glasgow stood up with a sense of power and purpose which has reverberated around the world. On this occasion, the protective hand of Glaswegians helped Lakhvir and Sumit.” But he also cautioned: “We know the Home Office will double down on its heavy-handed approach. That’s why we urge the Home Office to abandon its policy of forced removals and adopt an immigration policy based on human rights and dignity. Glasgow’s response to the Home Office should serve as a wake-up call to the UK Government.”

Aamer Anwar, the human rights lawyer who negotiated the release of the two men, told me: “It’s not very often that you get to beat Priti Patel’s Home Office, but Thursday was a significant victory on many fronts. A combination of uncompromising people power and a realisation that the Scottish Government would not back down to the Home Office meant Police Scotland had no options left other than to liberate the two men.”

He continued: “What this exposed was a tension that lies at the heart of a reserved immigration issue, for future deportations we can be assured that the Home Office will get its act together and call up the police first for back up. The ball is in the court of Police Scotland and the question really is whether next time they will they do the bidding of Priti Patel or recognise that public safety and community relations serve a higher purpose We won this time, but I suspect a bruised Home Office will return for another battle, which we cannot afford to lose.”

Such a moment brought supportive statements from First Minister Nicola Sturgeon and Justice Secretary Humza Yousaf as well as Scottish Green leader Patrick Harvie and Scottish Labour leader Anas Sarwar. But the UK Home Office showed no contrition stating: “It is completely unacceptable for a mob to stop the lawful removal of people living in our country illegally. We 100% back the frontline in removing those with no right to be here.”

Some said far worse. George Galloway, once a radical left-winger who challenged the British state and stood for anti-racism as well as Scottish self-government, marked his long descent into a hard unionist position. Having just run in the Scottish elections under the “All for Unity” banner to “stop separatism”, resulting in a derisory vote, he commented that: “Immigration and asylum are UK Government matters. A devolved Assembly has openly and unlawfully defied the implementation of a UK Government decision. This is an act of rebellion.”

Iain Martin, who runs the right-wing site Reaction UK, tweeted: “Immigration protests: the SNP’s attempt to delegitimise the British state must be resisted”, and attempted to make the protest synonymous with the SNP and senior politicians in it, when the protest was a spontaneous reaction of the local community and supported across the political spectrum, with prominent Green and Scottish Labour figures urging solidarity.

Tory MSP Murdo Fraser, a lifelong Rangers fan, made the connection between Thursday’s peaceful, respectful protest in Kenmure Street, and the then impending Rangers celebrations on Saturday as the club were presented with the trophy for winning the Premiership – “I hope all Rangers fans will celebrate responsibly tomorrow, esp given the spike in Glasgow COVID cases. Sadly I fear such calls are undermined by some politicians actively encouraging street protests yesterday. Can’t be one rule for some and another for others.”

This was not a good comparison for Fraser to make as events unfolded. Kenmure Street involved no non-violent direct action, no one drank alcohol or fought each other, and given it was a community protest local people cleaned and tidied the area where protesters had descended. No such statement could be made about how a section of Rangers fan choose to celebrate winning the title. Unable to attend the match they gathered in the city’s iconic George Square at the heart of the city centre and engaged in hooliganism, violence and thuggery: the second time in as many months they did this to this landmark space. And what condemnation did it bring from Rangers or the like of Murdo Fraser? Nothing but the most general perfunctory statements.

The best and worst of Glasgow

The radical economist Katherine Trebeck had a different take on Kenmure Street speaking at the opening event of Aye Write book festival on the book Scotland after the Virus edited by myself and Simon Barrow, commenting: “This showed the strength of solidarity of the local community and how the community really turned out. It also showed the best and the worst of society: the heartless institutions and bureaucracy of the Home Office compared to the best of humanity and people looking out for, caring and protecting one another.”

The Kenmure Street victory did cause me to pause and reflect on the Southside, Scotland and the UK. On the first, Glasgow’s Southside has a proud tradition of opposing racists and fascists which this direct action drew from. It is no accident that this area has been consistently singled out by the far right who have been consistently humiliated. In the 1997 UK election, when Mohammad Sarwar was the Labour candidate for the first time the BNP won 149 votes; in the recent Scottish elections a fascist candidate formerly of Britain First won an even more pathetic 46 votes.

On the second, it seemed more than coincidental that this raid took place in the Glasgow Southside constituency – represented by Nicola Sturgeon, First Minister. Not only that it took place seven days after the Scottish Parliament elections had returned the SNP for a fourth term with a pro-independence parliamentary majority, Sturgeon explicitly saying in the campaign and SNP manifesto that she was seeking a mandate for indyref2 when the COVID pandemic subsided.

Some saw Kenmure Street as nothing to do with the constitution, others wished the direct action had been made more explicitly about independence, but protestors got the balance right: putting their community and fellow neighbours first. Underlying our action was something profound which is the nature of power and our collective agency in the face of the British state. And in Scotland those questions are intimately connected to the question of self-government. Who makes our rules as a society, in whose interests do they make those rules, and how are they held accountable?