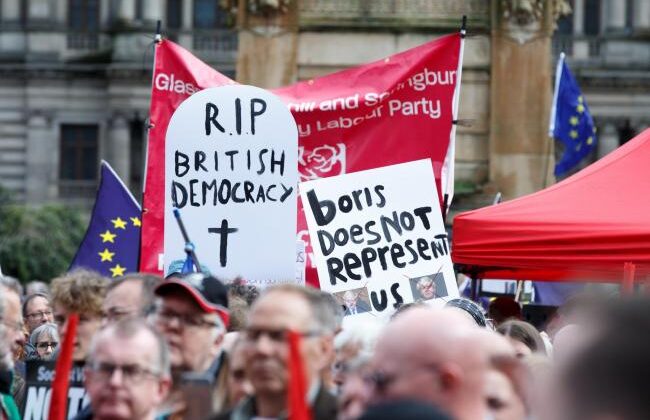 How not to do a break-up: Brexit and lessons for Scottish Independence

Today is 1,630 days since the UK narrowly voted for Brexit – and Scotland along with Northern Ireland voted Remain. ‘Taking Back Control’ was meant to be simple, smooth and straightforward, according to its adherents. It was meant to be ‘the easiest trade deal in history’ where the UK held all the cards in any negotiation. And so the Brexit denialism continues with David Davis, former Minister for Brexit, saying on Monday that ‘we must remember that Britain has nothing to fear with a No Deal Brexit.’

Four and a half years of chaos, confusion and obfuscation. Brexit is in crisis and on the brink of inflicting even more self-harm on the UK economy and society. And whatever happens in these last few days of the transition period with Boris Johnson’s last-minute trip to Brussels, the problem with Brexit goes much deeper than mere ineptitude by its leading advocates.

Rather, its roots can be found in the deliberately vague ‘all things to all people’ version of Brexit on offer in 2016 and the unrealistic and contradictory politics which have dominated the past 1,630 days. This is live, real politics with life and death consequences which affect not only Brexit and the future health of the UK, but that has consequences for Scotland and the independence debate.

Take the 2016 vote. There was no agreed Brexit offer on the table that people voted for. There were two Leave campaigns – whose aim was to maximalise the Leave vote and allow voters to project their own personal Brexit onto their own vote. We have had four and a half years of Brexit delusion and deliberate deception which has deliberately set about confusing voters and clouding the political debate and choices. Even this week, Brexit Party supporter and Farage sidekick Richard Tice recited with pride ‘No deal is better than a bad deal’ – a dangerous comment which he even claimed ownership of – as if this was something to be proud of.

We had four and a half years of Theresa May’s ‘Brexit means Brexit’ and May’s ‘red lines’ which boxed in the entire UK negotiating position, and the enactment of the Article 50 process in March 2017 before the UK had agreed what it wanted from Brexit. Three years of a May administration hobbled by Tory obsessionals and the hard-line DUP, leading to Boris Johnson and his two infamous Daily Telegraph columns. Johnson was, and is, in the words of The Sun’s political editor Harry Cole ‘the poster boy of Brexit’, but for Johnson this was all about his personal positioning and advancement, one that made his career. And on it goes with this week the Internal Market Bill coming back to the Commons which had been threatening to break international law, with those clauses now thankfully withdrawn.

Then there has been all the arrogance, disinformation and Leave mythology in 2016 and since. Nigel Farage advocated a Norway deal in 2016 including UK membership of the single market; Tory Daniel Hannan when a MEP said of Brexit

‘absolutely nobody is talking about threatening our place in the single market.’ This became synonymous after the vote with ‘Brexit in name only’ (BINO) – these handy acronyms which now seem to disfigure our politics. Then there is the Irish question, untouched in 2016, which as Tory David Lidington recently lamented about the UK’s approach: ‘we were too slow to spot the Irish border.’

There has been a Tory descent into this madness, but it is a longer story – what Lord Ricketts, former Permanent Secretary of the Foreign Office calls ‘a psychodrama about the Conservatives and its internal obsession with the EU’. Thatcher and Major became engulfed and, ultimately as Tory Prime Ministers, destroyed by Europe. Then when David Cameron became Tory leader – fifteen years ago last Sunday – he told his party that it had to ‘stop banging on about Europe’. That didn’t work out very well. As Prime Minister in January 2013 Cameron committed to an in/out EU referendum – a commitment he didn’t think he would have to deliver being head of a Tory-Lib Democrat coalition. Then he accidently won the 2015 election with a majority, had to deliver the referendum, held it, lost, and resigned the next day. Cameron will always be remembered for Brexit as Blair will be for the Iraq war, but Brexit is much more disastrous and damaging.

All of this ineptitude is about a core problem which has sat unsolved for the past four and a half years namely, what is Brexit for? Stephen Bush, political editor of the New Statesman puts it:

What does the government want? Is it the liberty to pump money directly into chosen industries and sectors free from restraint? Is it absolute control over British waters? What’s the economic strategy that underpins what we’re doing?  Do we want to dismantle the regulatory alignment that has facilitated our cross-party objectives towards Northern Ireland and the Irish border since 1985? Do we want them to stay in place? What are we actually trying to get out of these talks?

The contradictions running through Brexit run through the heart of the project. They are between getting a proper trade deal between the UK and EU, and having the maximum choice to negotiate the UK’s trade deals with others across the world: a chasm which has never been squared. These two stands are fundamentally irreconcilable. One is an absolutist, fantasy version of sovereignty: rooted in a British exceptionalism and pseudo-globalist Britain vision of supposedly ‘putting the Great back into the Britain’ as we reinvent our merchantile traditions sailing the waves again and conquering the world trade wise. The other is a nuanced, pooled notion of sovereignty as seen in a world of interdependence – one which acknowledges trade-offs and difficult choices and the limits to Britain’s reach and power economically and diplomatically.

This means that the UK now faces either the disaster of a No Deal Brexit or a minimalist, low deal Brexit. And in the context of Brexit this is adding economic and social self-harm on top of a year of huge human loss in lives and livelihoods. With all that we have been through with COVID-19 with 60,000 plus people officially dead and much more damage to our economy and society and what it is to be human, it is worth pausing and recognising that either of the two Brexit possibilities will do much more harm to the UK economy – which the Bank of England’s analysis confirms. And this is a world and a catastrophe that Tories and Brexiteers have wantonly inflicted upon us.

Brexit and lessons for Scotland

The experience of Brexit has lessons for Scotland and the independence debate and how not to do things. First, there was no agreed Brexit offer in the 2016 vote. In 2014 Scotland had, with all its imperfections, the Scottish Government’s White Paper on independence. Second, the 2016 campaign involved the massive use of dark money and dark art campaigning, with Leave campaigner Arron Banks (who Bloomberg assessed was worth £34 million) never explaining where his £8 million donation to the Leave campaign came from – the largest political donation in UK history, while the two leave campaigns broke electoral law.

Third, the scale of mandates should have a relationship with their interpretation and implementation and what follows. The UK voted 52:48 for Leave, with Scotland voting 62:38, and Northern Ireland 56:44 for Remain. Yet instead of a nuanced, compromise Brexit which reflects the differentiated union that is the UK, we have had four years of the mantra of maintaining ‘the territorial integrity of the United Kingdom’ – when the UK is a union state of four nations, and we are now being presented with an absolutist Brexit (with Northern Ireland having special arrangements).

Beyond any official documents any version of independence has to have an honesty, an ownership which goes beyond one perspective or strand, and a generosity to reach out beyond true believers. Independence should if it wins be about all Scotland and all the political perspectives, parties and people of this nation. Tone, tolerance and respect for opponents is fundamental – as is standing up to bullies, abusers and haters. Brexit had the death of Labour MP Jo Cox and the use of the term ‘Remoaners’; independence has its own toxic tendencies talking of ‘traitors’, ‘quislings’ and conspiracy theories.

Independence involves big strategic questions – just as Brexit does – which cannot be avoided: about the economy, the currency question, borders, nature of sovereignty and transition process to independence. They involve the detail and sort of independence envisaged and critically, the kind of Scotland people want to create and live in: which I wrote about at the weekend in the ‘Sunday National’. Jonathan Shafi of the Radical Independence Campaign believes like many do that the currency issue is critical, something the official Yes campaign fudged in 2014, commenting:

Sterlingisation is simply not an option – yet the SNP leadership can’t seem to see past it. It would prevent Scotland joining the EU, upon which much of the official case has rested. It would leave Scotland without economic control – with its wealth being extracted by the City – at a time of economic devastation when strategic state interventions are critical.

The basic problem is that while the number of reasons given for leaving the UK has increased since 2014 – namely our decision to leave the EU – so have the number of questions over how Scotland would manage its relationship with the rest of the UK, now outside the EU. That the UK needs reform is undeniable but independence isn’t so much a solution to that as an additional later of complexities, barriers and costs to the ones we already have.

Any independence referendum is not the end point of our debate. Such votes are processes, and democracy has to be about more. Referendums are not an end in themselves, rather a means to an end. Referendums are not perfect devices and binary choices profoundly imperfect.

We now have developed a practice of having referendums on major constitutional reform across the UK. And Scotland also has a long homegrown tradition it can draw upon of grassroots, bottom up referendums, having 1,131 vocal votes on whether areas are ‘wet’ or ‘dry’ – initiated by the Temperance (Scotland) from 1913 through the 1920s – to decide whether to allow alcohol sales or not with most votes.

We can develop more rules for referendums – triggers, pre-referendum processes, agreeing formal offers from both sides in binary votes, legislating on the use of dark money and dark arts campaigning, and developing a framework on advertising on the internet and social media. All of this is part of what makes democracy and gives meaning to our democratic choices. But what matters most is the politics that we create and make, and Brexit has been a disastrous example of politics and politicians not working and failing all of us. We should never let such an example in deception and disinformation ever happen again.