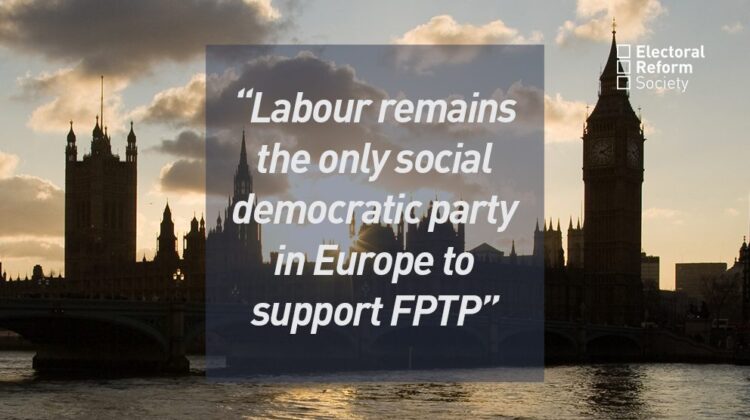 How to defeat the Tories and aid democracy

Tory problems mount by the day. There’s fuel and food shortages evoking the 1970s, a Brexit that seems only to be delivering problems and, in Boris Johnson, a PM who seems to know and care little about detail and the real lives of people. Despite all of this and more the Tories are still in the lead in the polls and the odds remain against Labour winning the next election outright.

Labour has a mountain to climb to win the next election that could be as little as a year and a half away – coming in April or May 2023 once the Fixed Term Parliament Act is abolished.

Labour suffered its worst defeat since 1935 last time around, and now needs to win 124 more seats to win a bare majority – something the party has only done twice in post-war times, in 1945 and 1997. This would need a swing of 10.5% from Tories to Labour – more than even in 1997 and a shift that only occurred once in 1945; without a Scottish recovery this rises to a 13.8% swing.

The best Labour can hope is to deprive the Tories of a majority. This only requires the Tories – taking Sinn Fein abstentionism into account – to lose 41 seats to lose their majority and according to political watcher Mike Smithson 47 seats to lose office, given the Tories are “uncoalitionable”, raising the prospect of a minority Labour Government.

Labour need to start talking about this political issue now and reach out to the other main anti-Tory parties – SNP, Lib Dems, Plaid Cymru and the Greens – who themselves need to start addressing the politics of a hung Parliament and how the Tories might be excluded from office.

There is a deep-seated Labour “ostrich in the sand” approach to not talking about this – based on the grip of Labour conservatism, attachment to FPTP, and fear of not looking like a winner. Yet this needs addressing now, not left to an election campaign or its aftermath, as Danny Finkelstein raised last week in The Times writing of Labour: “What it cannot do is wait until the election comes and then jump out from behind the sofa and shout, ‘Surprise!’ It has to start preparing voters now.”

That entails Labour thinking how it will deal with the SNP and Lib Dems and win their parliamentary support – and that involves two big issues: the holding of an indyref and the introduction of proportional representation.

On the first, Finkelstein observes: “There is a perfectly good argument for a further Scottish vote, and the Tories will be pressed on it too”; on the second – Labour embracing PR it could “dish the Tories, whose electoral pre-eminence owes a great deal to the electoral system, and reposition the hung Parliament as a new way of doing politics.”

The forces of inertia in Labour are often underestimated, and in response to Finkelstein were given voice by Alex Massie who stated that in a hung Parliament a minority Labour Government should offer “nothing” to the SNP – instead inviting them to put up or shut up – vote with or vote down a Labour administration.

This argument is as old as the first-ever Labour Government and doesn’t stand up to the facts. There have been three minority Labour administrations – 1924, 1929-31, 1974 – all short-term affairs followed by subsequent elections. In two of the three, Labour were defeated at the election and the Tories or a Tory-dominated government returned. In only one of the three – October 1974 – a majority Labour Government then followed – with a majority of three seats it subsequently lost.

Labour and the anti-Tory parties need to remember that First Past the Post (FPTP) aids Conservative dominance, yet Labour cling to FPTP in the belief that it will once in a while return a Labour Government.

There is the need to start facing these issues in preparation for the heat and noise of an election campaign. In that the Tories and their press allies will make various smears about the spectre of a minority Labour Government been held “hostage” by the SNP and that this will lead to division, constitutional wrangling and that tiresome cliché “a coalition of chaos.”

Such rhetoric paid dividends for the Tories in 2015 – winning over UKIP voters to Tories, inadvertently giving David Cameron a majority which ultimately destroyed him. Then Tory strategists were able to make hay with the prospect of SNP influence over Labour, when many thought Ed Miliband could win outright and the SNP were but a small force in Westminster. Both factors will not be in play in 2023 – and give more ammo to the Tories.

This reinforces the case for preparing now. For Labour this requires embracing the politics of democratisation now: embracing PR, abandoning FPTP and doing so boldly on principle not expediency. It means recognising that the British constitution is irredeemably broken, serves the interests of the Tories, and that Scotland has a right to an indyref.

This requires the SNP and others get serious about the politics of change and co-operation and how they nurture “a progressive alliance” and make common cause against the Tories to dismantle the rotten, undemocratic, gerrymandered British constitutional order which serves the interest of one party.

The above requires a seismic shift in Labour which hasn’t happened yet in its history, but many in the party know it cannot go on as it has done – losing four elections in a row, and with party members massively in favour of ditching FPTP and embracing PR there is a mood for change.

The brazen nature of Tory rule and its self-interest and arrogance is directly linked to the undemocratic nature of the British state. Labour need to think about how to aid the Tories losing the next election – and how they will work with the SNP and Lib Dems. Similarly, the SNP need to start thinking about how they position themselves in Westminster to achieve maximum influence.

Labour need to not shy away from these issues – but challenge the “elective dictatorship” which aids the Tories and recognise that another indyref may come sooner rather than later.