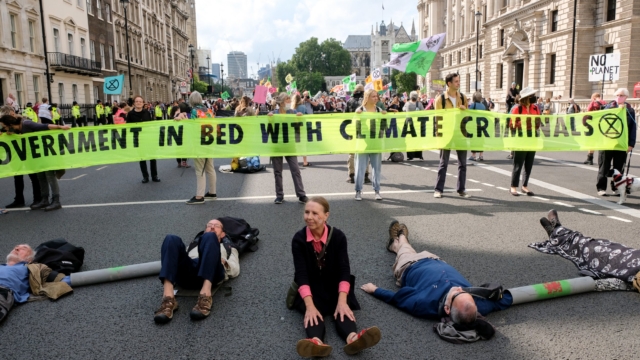 2022 is the centenary of a year of rebellion. The Irish Free State was born in 1992, the ‘Red Clydesiders’ went to Westminster; and the year gave its name to the 1922 Committee of Tory backbenchers after they overthrew a sitting Prime Minister – David Lloyd George – then heading up a Tory-Liberal coalition government.

Boris Johnson and this Tory Government should know that today we live in even more an age of rage and rebellion – being the beneficiaries of the Brexit insurgency. This administration in its two and a half years in office has grown more careless with the truth and public standards, while demeaning and trashing nearly every convention and decency in politics and government.

All of this begs the questions: when does this end as surely it will for Johnson? What comes next after his disastrous Premiership? And what happens to Toryism and British government after this latest set of scandals, all to a backdrop of unprecedented sleaze and corruption?

Boris Johnson has shown an endless capacity to lie, dissemble, obfuscate, blame and smear others, and do anything but take responsibility. This is the man that 160 Tory MPs and 92,153 Tory members voted as their leader – the former out of complete electoral desperation to get them out of the hole that Brexit and Theresa May had got them into. The present debacle and multiple allegations about the chaos and corruption of Johnson’s Premiership should come as no surprise to them, or anyone who has followed his career.

Such is the invidious ‘Boris Johnson effect’ that by his survival and clinging on to his scandal-ridden Premiership he is dragging down and tainting the Tory Party. Government ministers and backbench Tory MPs taking their cue from a desperate Downing Street do all they can to divert, float red herrings and smear opponents. Thus Tory MP Crispin Blunt last week said what was all the fuss about parties and breaking lockdown rules when ‘inside most homes and inside most businesses, and inside most places of public administration, people may not have kept absolutely to the rules’ and for one celebration ‘it was his birthday!’ If anyone ever had any doubt that Toryism has a burning contempt for the people of this country then they shouldn’t now.

Former Tory minister Rory Stewart rightly pointed out this is not just a crisis of the Tory Party and the judgement of those who made him leader, but of a wider system of government and politics which has slowly been cheapened. Johnson is not Stewart argues ‘an aberration’, but ‘a product of a system that will continue to produce terrible politicians long after he is gone.’

Getting rid of a Tory Premier can be difficult

Boris Johnson will be removed. It is a question of how and when. He has already become a Prime Minister who is not there, leading a government barely worthy of the name. Tory loyalists prattle words about his ‘laser like focus’ and having got ‘the big calls right’, but he has no focus on government, dithering on big decisions and only this week cancelling a planned call to Vladimir Putin on the Ukraine to concentrate on his survival.

The end of Johnson’s Premiership will be messy. No sitting Tory Prime Minister has been removed from office by losing a vote of no confidence. Neville Chamberlain in 1940, Margaret Thatcher in 1990 and Theresa May in 2018 all won parliamentary votes against challenges to their leadership. The first of these was in the House of Commons in those momentous days of May 1940 which led to Churchill becoming leader; while Thatcher’s moment of reckoning saw Michael Heseltine stand against her for the leadership.

John Major in 1995 survived a kamikaze leadership from John Redwood, but was damaged and struggled on to electoral humiliation. The only Tory leader in recent times removed by a vote of no confidence in the party was Iain Duncan Smith in 2003 who lost a vote 75-90 in the Tory parliamentary party after his disastrous ‘quiet man’ speech to conference.

Two points follow. It is hard to defeat sitting Tory Prime Ministers in such a vote. But it is true that they do not need to lose such a vote for the beginning of the end to start. Chamberlain won his vote 281-200 in the Commons and initially thought he could stagger on despite the world collapsing around him. Thatcher defeated Michael Heseltine 204-152 in the first round of Tory MP voting and assumed she could put her name forward for a second round. Johnson in any vote of no confidence will win it numerically such is Tory loyalty and the payroll vote, while they subtly practice the art of regicide.

Toryism is the problem and will remain so after Johnson

Where will this leave Toryism after the chaotic ride of Johnson? In many respects, much of this crisis is about Johnson and his lack of any moral compass. Thus it is possible under a new broom such as Rishi Sunak that both he and the Tories could enjoy at the minimum a brief electoral honeymoon. John Major had one; even Gordon Brown; and Major unlike Brown held and won an election.

Underneath a change of Tory leaders Toryism will remain broadly the same. It will remain a once great British institution – like many in public life – which has lost its way, been taken over by shysters and become corrupted in the process forgetting the people it is meant to serve.

The Tory record of appalling government is a long one of indictment: 150,000 plus dead from COVID-19, the UK ‘the sick man of Europe’, huge economic damage done to the economy, as well as the Brexit debacle inflicting a double-punch on the UK economy. All while government ministers embrace the Boris Johnson boosterism of hailing the great record of this government ‘which has got all the major calls right’ – an insult to the grief, loss and bewilderment that hundreds of thousands of families feel struggling to come to terms with the impact of this pandemic.

Government has been debased: £37 billion wasted on useless PPE contracts, Tory donors and cronies like Michelle Mone rewarded, and mass fraud in COVID contracts to the tune of £10 billion just written off. And all while the government launches a campaign against unemployment benefit fraudsters.

A new Tory administration will try to draw a line under the above, get rid of some of the embarrassing low-lives who diminish public life such as Nadine Dorries and Priti Patel, but will still have the same old Tory tunes. They will still be waging war on asylum seekers and refugees, still playing the authoritarian law and order card, rigging the electoral system and for the first time ever restricting voting to aid the Tories. All while trying to make Brexit work by burning ‘red tape’ and obsessing about tearing up the Northern Ireland protocol.

Under a Sunak Premiership even if at first he rows back from some of the above, he will be dragged back to the same old Tory prejudices by the need to offer some ‘red meat’ to his backbenchers – many of whom live in a parallel universe where the main issue facing the UK today is not COVID or Brexit but ‘the small boats crossing the Channel’. All while the Tories are funded by a shady network of dark monies and Russian oligarchs.

Years ago in the early 1990s I decided I would try and understand Toryism and not think of them as simply villains and people out to do bad things. This came from the insight of trying to avoid ‘dehumanising your opponents’, instead empathising and understanding their motivations.

I took this literally and interviewed thirty grass roots Tory members in their Glasgow homes. It was a cathartic experience, these people were welcoming and open and told me with great candour why they were Tory and how they saw the world. It changed how I saw Toryism there and then, which was my intention, and since then through Tory leaders and governments I have tried to understand their motivations and the evolution of Tory thought.

This may be too much for some people. But there used to be a Tory story which had redeeming features. And there was a convincing Tory story of Britain – both domestically and in our place in the world. It was no accident Toryism had a self-confidence and swagger about itself: it was the dominant ruling class story of Britain and one with popular support. No longer can we say most of this: there is no convincing Tory story left.

The descent and bastardisation of Toryism has been a long car crash. Thatcherism upending lots of old Tory assumptions, John Major’s weaknesses, the callowness of David Cameron and George Osborne. The endless banging on about Europe even after Brexit. The widespread racism, xenophobia and Islamophobia.

As the Tory Party has come more and more to celebrate being ‘the nasty party’ so the people at the top – Cameron, Osborne, Johnson – apart from all being from the same tiny privileged group regard politics as something you do when you are not making lots of money (and for many with the former a vehicle to the latter). Politics to them is nothing more than a game of endless one-upmanship, and the adult equivalent of some Bullingdon Club ‘frat house’ male piss up – which does seem to have been how Johnson ran Downing Street.

Only last week Osborne writing in The Spectator reflected on himself, Cameron and Johnson, remembering when they were planning to remove Iain Duncan Smith as leader. At one point in the day it turned out every Tory MP had voted bar Johnson who when cornered by Osborne said ‘he didn’t have time to vote as he had to go and edit The Spectator.’ They dragged him off to vote, but all of this is told as a jolly jape – men who have never grown up indulging themselves as part-time politicians while thinking this can pass for statesmanship.

Meanwhile people up and down this land worry about real stuff. They worry about food, fuel, household bills, children’s clothing, the brutal reality of UK benefits, being caught in the trap on disability benefits, or being sanctioned and having support withdrawn for the most insignificant indiscretion. We live in a Britain that is not, despite all the heart and love here, worthy of calling itself a civilised country.

Toryism is not going to come back to sanity. Any change at the top will still leave a repulsive, degenerative Toryism in charge that continues to insult the finer, nobler traditions that Toryism used to embody. That inhumane Toryism with a more competent, human face does not change any of the fundamentals.

One big question for those of us in Scotland is this. How on earth do we live on this island with a Tory Party prepared to inhabit another political universe? That is willing to break rules, laws and any ethical considerations while also representing some of the vilest policies imaginable in a country we call a democracy? That is a question for all of us including Scottish Tories.

If there is no way back for the British Tories, and if a Labour Government is only a short interlude and reprieve in their historic near-monopoly of power, we in Scotland have to come up with some hard answers to some inconvenient truths. Not today or tomorrow, but soon Scotland needs to gather our collective resources and come to our senses, and get out of this sordid state. I know some would wish it otherwise, but Scotland deserves better than this – meaning not just the Tories but the UK state.