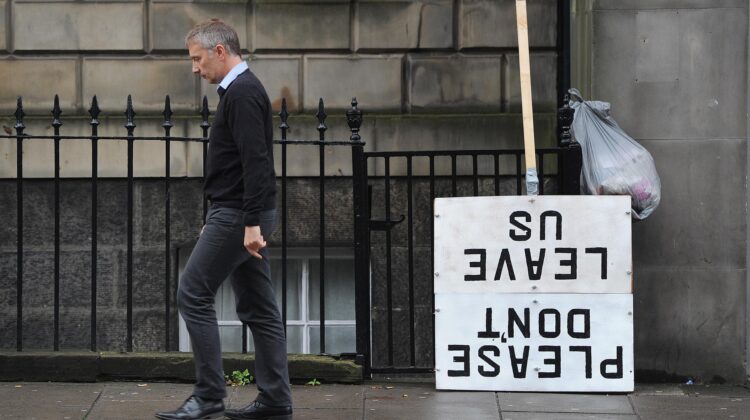 2020 has been the year of many striking things. It has been a year of progress for Scottish independence. A raft of polls show a consistent majority for independence and the SNP is polling strongly. Nicola Sturgeon is massively more popular than Boris Johnson; while the SNP’s trust ratings on a range of issues is impressive. All of which points towards the likelihood of a pro-independence majority in seats and votes in the 2021 elections.

Some independence supporters may well think that there is now an inevitability to the march to victory, or that the present course of caution is enough. Rather, this success and strength is the ideal moment to reappraise, renew and redouble the work that needs to be done in the near-future to win independence and define the future Scotland.

Fundamentally, independence cannot just become associated with a politics of process and an indyref – which is a means to an end not an end in itself. Former SNP insider Kevin Pringle puts it: ‘Yes activists need to guard against focusing on means at the expense of ends: dwelling too much on the mechanism of a referendum, and not enough on the arguments for independence.’

Secondly, this is not a debate just involving one active partner: the independence movement. As Boris Johnson and the UK Government have been called active agents of independence – including by Scots Tory leader Douglas Ross – so it is just possible that a post-Johnson UK Government could try to strategically reset the Scottish debate. The challenge is that this would have to involve pan-UK reform and remake the powers and character of the British state: something the British political classes have failed to do.

The detail and economics of independence

The detail of independence matters. Central to this is the economic prospectus. John Curtice of Strathclyde University comments: ‘Although voters are more inclined to view the economic case for independence more favourably than in 2014 – in part at least thanks to Brexit – they are still less likely to be convinced of that case than they are the arguments that an independent Scotland would have more say over its own affairs or that it might have more influence in the world.’

Gregor Gall of the Jimmy Reid Foundation states that independence ‘must show that the majority of people in Scotland will be materially better off under independence – and far more so than the £500 per annum that was touted in 2014.’ Alex Bell, former head of the First Minister’s Policy Unit says: ‘How do the poor benefit from independence? There is a danger they don’t. There’s a huge missing link between words and reality on Scotland’s biggest policy issue.’ Former economic adviser to the SNP, Miriam Brett observes: ‘We need to put forward a vision that really speaks to communities; one that inspires people and builds energy and hope. Four decades of Thatcherite thought rooted in deregulation, privatisation and austerity has not only reshaped our economy but has dramatically restructured our society; hammering away at our social fabric.’

Then there is the currency question. John Curtice comments: ‘Relatively few voters seem interested in Scotland having her own currency, as now proposed by the SNP. The still relatively narrow Yes majority in the polls could melt away if voters’ doubts on these issues were reinforced during a referendum campaign.’

Writer and musician Pat Kane notes: ‘Currency is the key issue. Because it is the last remaining weak spot in the projection of native competence of the SNP government. It’s also where Johnson’s government can still cause huge damage. And given how many hedge fund managers and speculators are deeply wired into the ruling Tory elite, some very targeted damage too.’

Related to this is the issue of EU membership, and the nature of an independent Scotland’s border with rUK and England. Kirsty Hughes of the Scottish Centre on European Relations comments: ‘Borders is one key issue that needs much more work – how will the Scottish-England border operate as an external border of the EU (whether under deal or no deal) . . . [and] what bilateral relations are most important and feasible (given EU membership) for Scotland and rUK to build beyond that (on top of the common travel area)?’

The vision of a future Scotland

Independence involves painting a feasible, uplifting picture of a future Scotland which takes on doomsayers and pessimists. Simon Barrow, director of the beliefs and ethics think-tank Ekklesia, believes: ‘A winning case won’t be about ‘poor little Scotland’ (a victim narrative, or giving the UK the finger), but about the capacity and responsibility for creating an outward-looking, generous country for all.’

Commentator Joyce McMillan thinks that an explicit version of that future country would help: ‘I think the independence movement needs to develop a kind of Scotland 2040 vision – an idea of where we want to be in 20 years, and how we might realistically get there.’ She goes on: ‘It doesn’t need to be hugely radical in itself, but it needs to address the possibility that we might be living in a very different world, and – as even Mark Carney is arguing in his current Reith Lectures – not to be too wedded to a form of capitalism that is now really running out of road.’

Winning independence means thinking about the psychology of change, observes Iain Docherty of Stirling University: ‘It’s much harder to convince people that making the change – even a change they want – is worth the effort involved. That’s what the Yes side needs to do now, thoroughly and patiently.’ Maggie Mellon, campaigner on women’s rights and justice issues states: ‘The SNP in government must start showing it is able to work with and listen to its own members and to the broader movement. There should be no place for complacency and arrogance even after a convincing election win next May.’ Miriam Brett comments: ‘When we envisage what kind of economy Scotland should have, we need a plurality of voices in the room to carve out what a just and sustainable future can look like, from unions to climate groups, industry voices and civil society organisations.’

Scotland has to start thinking about is the nature of our relationship with the rest of the UK. This week, in the aftermath of the SNP conference, Nicola Sturgeon described on ITV’s ‘Peston’ how she sees an independent Scotland in the light of COVID-19 and other issues: ‘If Scotland was independent right now, we would probably still choose to work together on things like drugs and vaccine approval, because it makes sense to do that given our geography.’

These comments brought kickback from some independence supporters, yet, as James Mitchell of Edinburgh University observes: ‘Regardless of Scotland’s constitutional status, Scotland will be affected by decisions made in London and will need to maintain close relations with the rest of the UK.  The nature of these relations, democratic accountability and the extent to which Scotland can affect decisions in London that will, in turn, continue to affect Scotland are vital matters that have been paid insufficient attention.’ Mitchell concludes stressing that: ‘There is much more rhetoric of interdependence than serious thinking or proposals as to what this will means.’

Independence has to paint a picture of how power is held to account – political, economic, civic, cultural. One senior SNP figure puts it: ‘We cannot just replace the power of Westminster after independence with our own mini-Westminster in Edinburgh.’ Hannah Graham of Stirling University thinks it is critical to: ‘recalibrate and restore relationships between Scottish Government and local government, in terms of tone and trust, transparency, power and resources.’ Too much focus has been put on Holyrood and its powers she thinks to the neglect of the wider Scotland: ‘With the focus on constitutional stooshies, and many taking poorly paid councillor jobs with ambitions of it as a stepping stone to Holyrood or Westminster, local democracy can sometimes be neglected and become a source of complaint and postcode disparity.’

Independence, the SNP and sharing ownership and power

Finally, independence will not be possible without the SNP. We would not be where we are as a nation without the SNP. But independence is about more than the SNP and we need to have a version of politics which is not just on the SNP’s terms and invites everyone else to come on board on their terms. Independence and the Scotland of the future has to be collectively owned and created by all of us – and that will require some hard thinking and work.

The SNP is clearly in a transitional point at the moment. Thirteen years in office have transformed the party and its leadership. Meanwhile the party’s post-indyref bulge in membership has finally translated into a set of political divisions and even internal organisation for party elections seen at party conference. This is uncomfortable for some with memories of faction fighting in the 1980s, but a party without internal pressure groups is one which is uncomfortably controlled by the leadership.

A challenge will be whether some of the fissures and tension points which define these debates: pro- and anti-Sturgeon, the stance people have on Salmond, the trans issue and Gender Recognition Act, and views on a future indyref, can be transcended by a party debate which focuses on the big stuff and draws from more party talent. That will be a difficult transition from a period dominated by the Sturgeon-Murrell leadership. But all political eras eventually come to an end and the SNP leadership would do well to recognise that and adapt accordingly.

Independence has the potential to be the big project of 21st century Scotland but has to be honest about the challenges and constraints ahead, and the difficult choices, trade-offs, and timescales needed to create the kind of society we want to live in. Independence has to have an element of realism – winning over the parts of middle-class Scotland who are still wary; radical – challenging the broken economic models of the past few decades that have harmed the UK and held back Scotland; and robust – mapping our future direction knowing that there will be obstacles and difficulties as we become the successful, thriving country that is our potential.

This will require addressing thorny questions including the practice of the Scottish Government and SNP to hoard power and not share it with others, the impatience and unrealistic expectations of some radical voices, and the paucity of alternative centres of ideas and thinking in Scotland – despite all the good work done by a small plethora of networks and initiatives. This is a time to get serious, strategic and engaged in the work that needs to be done.

Independence is a story about all of us, one we all have a right to have a say in, creating a Scotland that is our home and a beacon to others. If this future is to come in the near-future, we need a new culture of sharing, listening, and creating our collective future which rises to this historic moment. That will be a challenge to many who think they have the sole answers, but it is going to be exciting and hopefully transformational for all of us.