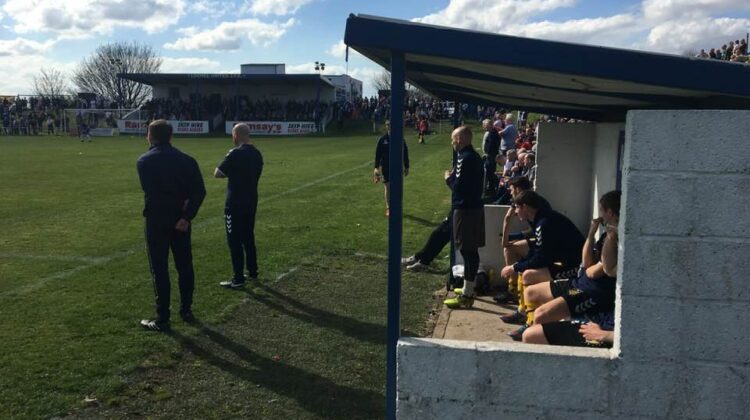 Isn’t it time the People’s Game cared about and listened to fans?

This weekend sees one of the showcase moments of Scottish football – the Scottish League Cup final between Livingston and St. Johnstone. Yet, the game which so many people care about and love is at a massive crossroads facing questions which will define its long-term future.

The COVID-19 pandemic has meant the game has gone nearly an entire year with no crowds in attendance, hence a huge reduction in income for the game and clubs. What, you may ask, is special about this? Haven’t all aspects of life – including professional sport – had to adapt?

This is true. But it is also true that the Scottish game has faced unprecedented pressures which have taken a particular toll.

The SFA at the turn of 2021 stopped all Scottish football outside the top two leagues. Leagues One and Two in the senior game – comprising twenty clubs, Lowland and Highland Leagues, and women’s football – were all suspended, supposedly due to COVID-19 anxieties and restrictions by the UK and Scottish Governments. The football authorities meet this coming Monday to decide what to do, and if the lower leagues can restart this season.

Paul Goodwin is co-founder of the Scottish Football Supporters Association (SFSA), a fan-led initiative who want a big shake-up of the game. He says about the state of the game: “Precarious is the best adjective I can think of. For the lower league clubs it is massive. COVID has highlighted many things.” One of which is how football is run: “Governance and well-being of the game has not been as good as we would wish. We keep on hitting the self-interest of clubs” with no one in authority addressing the interests of fans or the common good of the game.

The actions of the football authorities in shutting down the lower leagues illustrates their disregard for the vast majority of clubs. Scottish football has for too long been dominated by ‘the Old Firm’ of Celtic and Rangers, with any likely challenges to this becoming more difficult, such is the financial imbalance.

The increasing stranglehold of ‘the Old Firm’ has increasingly diminished the game and defined how the authorities see and run it. Stopping all football beyond the top two leagues in January was seen at the time as a sop towards the Scottish Government’s growing frustration at breaches of COVID restrictions by a couple of clubs. The authorities, fearing an injunction to shut down the entire game, panicked and in the words of one long-term observer of football “threw the clubs outside the Premier and Championship under the bus”, doing so without even consulting all the teams in the other leagues.

Now we are in a position where many of the teams in League One and Two have not played a game in two months and have no confidence that the season will return or be completed: including full-time clubs like Patrick Thistle and Falkirk. Goodwin paints a stark picture: “Will the season recommence for League One and Two, women’s football and the Lowland and Highland leagues? The best that can be hoped for with regard to Leagues One and Two is a reduced league season and that the clubs now have lost a minimum seven to eight weeks of playing. Will these clubs be able to restart? Doing so only adds to costs – as these clubs have no TV monies and no prospects of fans coming through the gates.”

The human face of the game

There is a significant human dimension as well as costs. Running one of the smaller clubs involves enormous commitment, time and resources but can also have major benefits for communities and local businesses, while involving wide-ranging outreach programmes which can have a beneficial impact on many young people up and down the land.

Take Stenhousemuir – a League Two club – established in 1884. Their chair Iain McMenemy, has been involved in the club for nine years and chair for the past three years, and is passionate about the club and its role in the community even during the difficulties of the past year: “We’re doing what we can to look after players and staff, and we’re continuing with our community help initiative which is delivering food, shopping and support to vulnerable people in our local community.  All of this is a cost to the club, but it is the right thing to do.”

He acknowledges the challenges they have faced: “I think I would say we are coping with the situation, but it would be dishonest to say anything more positive than that.  We all feel a deep sense of injustice.  Under the rules, professional sport is able to continue, and our players are all signed on professional contracts with clubs operating in a league which is the only professional league in Scotland, but we are excluded from taking part.”

Outside these leagues, the Lowland League is one of the feeder divisions into the main leagues and part of the new pyramid structure to let new clubs emerge and have the chance of rising up through the different tiers. BSC Glasgow were established in 2014 beginning life in Broomhill and now play in Alloa. Their general manager George Fraser is frank: “There are stress points for everyone: players, backroom staff. It is the uncertainty that making things really frustrating. We are fielding questions from everyone involved with the club but feel helpless at not being able to give them satisfactory answers. From an administrative point of view, do we need to look at things like extending contracts for instance.”

The success of women’s football

One of the biggest successes in recent years has been the rise of women’s football with the national team qualifying for the World Cup in 2019 in France and making a major impact here and internationally. Margot McCuaig, head of purple TV, has made a host of award-winning films for BBC ALBA on the game which go beyond the usual stories – bringing to life the lost dreams of Third Lanark, the successes of the women’s team Glasgow City and the never say die spirit of Ayrshire-born Rose Reilly who won the Women’s World Cup with Italy.

McCuaig says: “Women’s football in Scotland has been more visible than ever before. Seeing matches on television is finally becoming the norm. However, COVID-19, and the subsequent suspension of the women’s game has had a detrimental impact on visibility, participation, revenue and employment.” She notes the power of community pioneers: “Clubs like Glasgow City, now pushing in its third decade, are on the verge of creating generational supporters. They now have a legacy that will carry on through families and with others beyond that.”

There is widespread anxiety that all football outside the top two leagues may now be sacrificed. This would be a watershed moment in the game. Leagues One and Two have seen teams play between eight and eleven matches of what was already a truncated 27 game season (as opposed to the usual 36). The Scottish Cup – the second oldest trophy in the world – is under threat with a high likelihood it will not be completed this year. McCauig observes: “Whilst the suspension of the league was the right decision on the grounds of safety, it is more difficult to argue why the top flight of women’s football, including professional teams such as Celtic, Glasgow City and Rangers, are not allowed to train – utilising the same COVID compliance protocols as those approved in the men’s game.”

Underlying all of this is how the game is run. Nearly a decade ago when Rangers went into liquidation fans across the game outwith the Glasgow big two organised and rebelled to make sure that did not happen was that Rangers and football continued as if nothing had happened with the club remaining in the top league; instead Rangers started again in the fourth tier of senior football.

The above showed two points. The first was the paucity of the football authorities’ vision of the game which was totally driven by guaranteeing the gravy train of a minimum four ‘Old Firm’ derbies a year in terms of TV rights; the second was the power and influence of fans when they organised across clubs for the common good of the game. This was a landmark moment concerning power in the game, and one the authorities wanted to make sure was a one-off.

Football needs reform in Scotland. The SFA and Scottish Professional Football League (SPFL) have shown little interest in fans, in the clubs outwith the top two leagues, or indeed any real ambition. Rather, fans across the game should be at the heart of decision-making thinks Goodwin: “What we would like is Scottish football to press the reset button. To not just respect the economic impact of fans, but to respect the social and community impact and importance of fans. Football supporters should be at the centre of the future of the game.”

Scottish football faces a watershed. The layoff of much of the game, and absence of fans from grounds for nearly a year, will pose a major challenge for the game. Goodwin paints a picture of generational change when the game comes back: “Football fans can be divided into two groups” he says. “There are the old stagers who miss it so much. Football is so embedded into their history. Then there are the younger ones who are not season ticket holders and are infrequent visitors. This group will potentially see decline in their number of visits for games, with more concentration on big games and special occasions.”

Scottish football cannot go on treating fans with contempt and refusing them a say in how the game is run. We have seen over the past year how literally smaller football is without supporters. In Scotland, we also have the additional factor that fans contribute more to the income of clubs – amounting on average to nearly half the revenue of all twelve Premier clubs.

The Scottish game sometimes gets a bit sensitive compared to England awash as the latter is with TV monies and bloated budgets. But change is coming to the English game – with a Gary Neville-led reform group proposing that the game has an independent ombudsman – something the UK Government are viewed as considering supporting.

If England knows that it needs to embrace change in the governance and oversight of football, then the case is even stronger in Scotland. The football authorities can only cling to the status quo if they lack ambition and are scared of alienating the big two. No change in Scotland and the continuation of the same old stale diet will only condemn our game to continued decline. Our game is worth more than the football authorities think of it; let’s hope that they eventually realise this and acknowledge that fan-led change is in the best interests of the game.