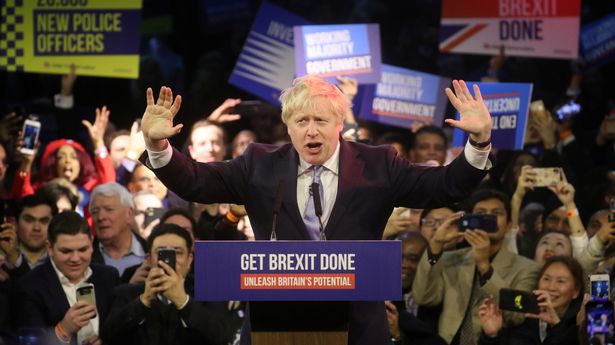 Boris Johnson’s Premiership is in tatters, he is discredited as a person and politician, and his tenure is coming to a predictable, messy end. The only question is timing.

Already lots of once true believers in Johnson are trying out unconvincing lines like “let’s look at the big picture, and all the right calls the Prime Minister has made” which is delusional and an insult to voters. Others try to be subtler, distancing themselves from the PM, and trying to put much of the blame on him personally to save the party.

This is a rotten government, and Johnson is an incompetent, disorganised, deceitful PM. But the malaise and evident rot is wider than Johnson and this administration. It goes to the heart of Toryism and what it has become, British government and our limited democracy.

Former Tory minister Rory Stewart said at the weekend: “Boris Johnson is a terrible Prime Minister and a worse human being” and added the rider: “But he’s not a monster newly sprung from a rent between this world and the next.” Knowing his character – “the majority of Conservative MPs, and party members, still voted for him to be Prime Minister. He is not, therefore, an aberration, but a product of a terrible system that will continue to produce terrible politicians long after he is gone.”

That terrible system is Toryism, British government and the media circus that reduces politicians to wannabe celebrities and court jesters like Johnson. The degeneration of the Tory Party under Johnson is now widely recognised, but there is still too much minimising of the state we are in.

For example, Jonathan Freedland of The Guardian looking at the descent of Johnson and the Tories puts the blame on Brexit which he said has “transformed the Conservative Party.” He continued: “Whereas once Tories revered tradition, Brexit filled them with revolutionary zeal” and “saw the Tories succumb to the lure of abstract nouns – Freedom! Sovereignty! – and supposedly creative destruction.”

Freedland expressly excuses Thatcher and Cameron in this story: “We need have no illusions about the Conservative Party of old.” He conceded that Thatcher had “her own kind of revolutionary zeal” and Cameron his brutal austerity, but stressed that under both “there were lines it [Toryism] dared not cross, monarchy and the union among them.”

This is completely wrong on the Tories and puts too much weight on the impact of Brexit. In reality the Tory Party has been breaking free of its old moorings and restraints over the past four decades from the rise of Thatcher onward. And this right-wing populist trajectory created the conditions which made Brexit possible. Freedland’s take underplays the long-term degeneration at the heart of Toryism – which runs much deeper than Brexit and Johnson.

This is not going to end well for Johnson but Toryism’s descent did not happen overnight, and has been aided by the culture of British politics and government and the murky, shadowy world of secretly funded think-tanks, lobbying and corporate interests who have corrupted Westminster, Whitehall and public life.

Thus, there are a host of authoritarian, punitive and partisan measures championed by this Tory Government: the Police and Crime Bill, the Elections Bill – the first measure ever passed by the UK Parliament restricting the right to vote, the Nationality and Borders Bill, which gives the UK Home Secretary the power to unilaterally strip UK nationals of their citizenship.

More of this is coming – trashing public institutions, bodies and processes that get in the way: the BBC, universities, judges, the Supreme Court, the Electoral Commission. This is what the “taking back control” of Brexit was always about for the Tories: the unashamed return of “the elective dictatorship” of unchecked executive power to be able to do what they like and get away with it.

The transformation of the Conservative Party into a national-populist force has been a long time coming – weaponised and made more explicit by Johnson and Brexit but about so much more, with similar trends seen across the centre-right in the West.

The full prejudice and intent of this was revealed in a Sunday Telegraph piece by academic Matthew Goodwin and think-tanker Philip Blond which talked of the Conservatives rejecting “the elite consensus which has dominated Britain and other Western nations for fifty years, a consensus defined by a commitment to elevating purporting minorities over maligned majorities” – driven by “hyper-globalism hyper-liberalism, mass immigration, European integration and the hollowing out of national democracy and national solidarity.”

Leaving aside that “hollowing out” “national democracy” and “national solidarity” is what modern Toryism is about while pretending otherwise, Goodwin and Blond go further by stigmatising minorities: “the elevation and ascendancy of unrepresentative minorities who unhinge majorities from their shared norms, language and collective belief.”

The above represents one example of the growing illiberalism and intolerance on the British right: the Putinisation of the Tories aided by their misuse and abuse of what passes for the British constitution, oligarch interests and dark money.

It is about how Tories do power and democracy. There have been ten Tory Prime Minister since the war and only four since 1945 came to office first through winning an election: Churchill (who had previously been wartime leader), Heath, Thatcher and Cameron.

The other six – Eden, Macmillan, Home, Major, May and Johnson- all came to office in-between elections as the Tories ruthlessly got rid of leaders past their sell-by-date.

Several of these went on to win elections; but it is revealing that only two Labour leaders have become PMs this way – Callaghan and Brown – who both went on to lose subsequent elections.

The Tories will soon move on to their seventh post-war PM appointed by themselves – in this case the tiny, unrepresentative selectorate of Tory members. The Tory Party have become a force for even more intolerance and prejudice, while still believing in its divine right to rule over us.

After Johnson – under Rishi Sunak, Liz Truss or someone else – that entitlement Toryism, which believes it has the right to ownership of the British constitution, government and statecraft, will still continue. And until we break up the support systems that give it substance, the nature of that constitution and government and the systems of privilege and patronage which underpin it, it will continue to do so.