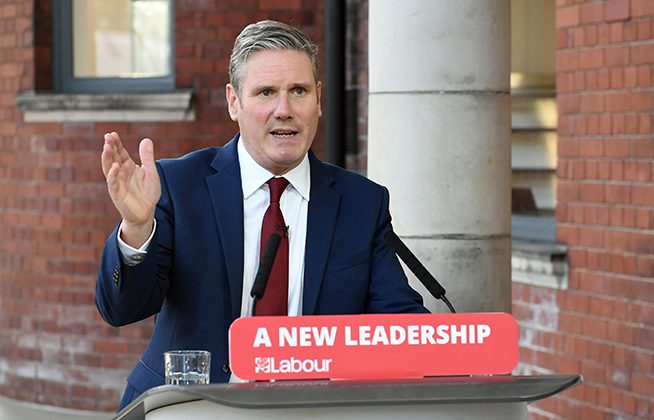 Labour has to stop being ambivalent and tell a convincing story about Britain: its past, present and future

Keir Starmer in his keynote conference address has indicated that he wants to reclaim patriotism as a principle and thread that runs through everything the Labour Party stands for.

This on the surface might sound uncontroversial but it isn’t. The Corbynistas had an instinctive opposition to all things patriotic and to many of the traditional symbols and institutions of Britishness.

More than this the Conservative Party have long claimed patriotism as their own. And in response many on the left have conceded this ground – with Labour historically uneasy about how it champions the country and its history and values which it aspires to govern and change.

Labour prides itself on its rich history and values and these were centre-stage in Starmer’s speech. Pivotal in this was reclaiming Labour’s record in office and its leaders who won post-war elections and led governments: Clement Attlee, Harold Wilson, and Tony Blair.

This points to the future terrain of a politics of patriotism for Labour – of understanding and championing its own record as a party of patriotism – a party which made the best of Britain through the extension of democracy, standing up to fascism, advancing worker and consumer rights, and freedom and equality under the law.

A couple of key examples from the party’s past should be at the cornerstone of how it sees itself, its past achievements, and the story it tells of its role in the best of Britain.

Take the watershed events of May 1940 which saw Winston Churchill become Prime Minister and which witnessed Attlee and Labour enter coalition government with Labour’s leader the deputy of Churchill and the party running most of the home front.

If the Corbynistas had known their party history better they would have known that the fate of Britain was decided by the machinations of Labour internal democracy. In the critical days of May 1940 Neville Chamberlain considered his plight as Prime Minister after the defining ‘Norway debate’ in the Commons had seen him win the vote in numbers, but lose the argument, with many Tory MPs voting against their government or abstaining in a vote of confidence.

Chamberlain knew dramatic action was needed and hung onto office as long as he could. His premiership was ultimately decided by the Labour Annual Conference meeting in Bournemouth, with the party’s NEC debating and deciding whether it could support Chamberlain as Premier which they declined to do. Labour said they would enter government, but not under Chamberlain who resigned, and when Halifax ruled himself out the path was clear for Churchill to become Premier.

Similarly once Churchill arrived in Downing Street, central to the nine War Cabinet discussions – whereby the Prime Minister outmanoeuvred Chamberlain and Halifax on the possibility of opening peace talks with the Nazis – were Labour’s Clement Attlee and deputy leader Arthur Greenwood. They were staunchly opposed to exploring talks at a moment of British weakness and which would send the wrong signal to the enemy. Attlee and Greenwood were pivotal to Churchill making the case for continuing the war and the rest is history.

Take the three titanic electoral contests between Attlee and Churchill: 1945, 1950, 1951. On each of the three occasions Labour polled more votes than the Tories, only losing office in 1951 due to a quirk in the distribution of parliamentary seats. Winston Churchill, the great Tory leader, was Prime Minister for nine years, but not once did he win the popular vote.

A left patriotism has to entail advocating and championing the cause of democratisation and Labour’s role in its progress and taking on the forces of privilege and inequality. One seldom mentioned achievement of Labour in office was the party’s legislation which brought about one member, one vote on an equal franchise.

This occurred long after people think it did in 1928 when men and women were given the vote on the same basis. To be exact it happened twenty years later – in 1948 when Labour abolished plural voting in the form of business voting and university voting whereby graduates had a second vote and even their own constituencies. This form of separate development was ended by the Attlee Government who removed this gerrymandering and built-in advantage to the Tories in British constitutional arrangements.

Labour has its own British story to tell – one with numerous achievements and milestones to be proud of – in the advance of economic and social rights, greater equality, diversity and respect, and in extending democratisation and human rights, while calling time on the indefensible ways the forces of reaction and privilege have defended their vested interests.

The party has historically shied away from trumpeting this for a number of reasons. One is that mainstream Labour has been constrained from the charge from part of the left of the party that everything to do with patriotism and telling a story about Britain is reactionary. Another is the fear of the omnipotence of the Tory Party claiming that this territory belongs naturally to them.

But there is another factor at play. That is the deep seated anxieties that senior Labour figures have had about the degree to which they can dare to consider changing Britain. In the party’s own DNA there is a sense that what Andrew Gamble calls ‘the conservative nation’ which speaks beyond the Tory Party and offers support to the ideas of the right might be the true spirit of Britain. It has not helped that the Labour leadership down the years have clung to a conservative interpretation of Britain – on the constitution, on dispersing power, and on where the UK sits internationally and geo-politically. Why vote for the ambivalent conservatives when you can have the real thing?

Labour cannot go on leaving such a politics of patriotism, nations and national identity exclusively to the right. Its failures on this are legion – one of which is its continual embarrassment to say anything about England as a democratic space and modern nation.

If the party is to remake the political weather, as the UK faces multiple crises of COVID-19, Brexit and a fractured union, it has to dare to tell its own story of a Britain that is progressive, enlightened and humane which Labour advanced in the past – that Boris Johnson’s Tories fall scandalously short of and are trashing and humiliating as we speak.

Labour have to find the confidence to say that we championed and made real the best that Britain can be and was, and drawing from our past we can do so again and be a party of the future. This would involve Labour being proud of its past and its achievements, and daring to be critical when present day Britain falls well below the standards of a modern democracy. In short, it would aid a politics of radical patriotism which was unashamed of being British and Labour.