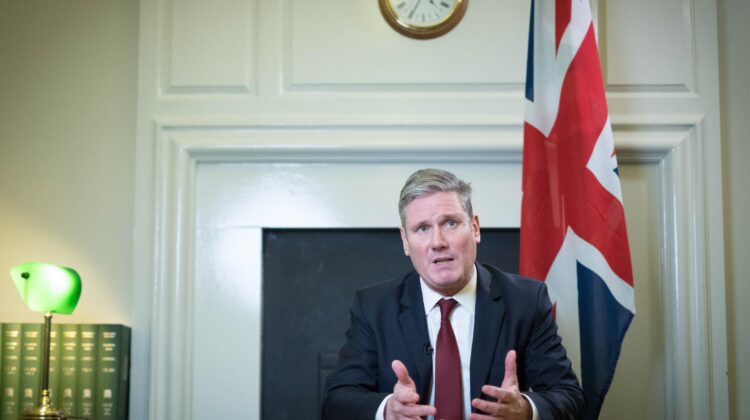 The big question of what the Labour Party stands for and represents has been raising its head again, particularly in relation to the party and Britain and Britishness – including such hot topics as patriotism and flags.

The initial hook for this was a Labour strategy document which, in the aftermath of the party’s emphatic defeat in the 2019 UK election, recommended ‘the use of the flag [and] veterans dressing smartly at the war memorial’ – with the intent to ‘give voters a sense of authentic values alignment’ as one of the ways to win back support.

The immediate issue may be Labour, the recent election and the current Keir Starmer leadership wanting to distance itself from any taint of Corbynism, but there is more here. There is the collective memory in Labour of how the right-wing press shamed and humiliated Michael Foot for turning up in a ‘duffel coat’ at the Cenotaph on Remembrance Sunday in 1981 – which the attacks on Corbyn evoked. And there is a deeper set of issues that connect to how Labour relates to, and has had, a problematic relationship with Britain and Britishness for most of its history – which has come at great electoral and political cost to the party.

The Labour Party at times has gone with the grain of the times and shaped them – in 1945, 1964, 1997. Each of these eras saw Labour win majority government from opposition, defeating an incumbent Tory Prime Minister, but more than this at each point the party presented itself as a party of change and the future. These latter points may sound uncontroversial but for large parts of its history Labour has been defensive, reflecting the conservative tendencies in the labour and trade union movement, resisting economic and social change and seeing them as attacks on worker rights.

Each time the party spoke to and inhabited a progressive, generous idea of Britain and Britishness synonymous with social advancement, enlightenment and greater opportunity – creating a host of institutions, policies and rights which made the UK particularly in the case of 1945 and 1964 a more equal and fair society. But it is also true that in each of these landmark moments Labour failed to turn that political sentiment and potential for a progressive Britishness into a permanent settlement and different country. The great Attlee revolution was exhausted within six years of office; the Wilson governments of the 1960s saw their dreams of economic growth scuppered on devaluation; and Blair New Labour destroyed any radical impetus they had in the first place in the killing fields of Iraq and Blair’s embrace of a neo-conservative worldview.

Even in these historic points Labour’s version of Britishness had a selective, even myopic lens, which told a very partial story. In short, Labour despite being a centre-left party uncritically (with honourable exceptions) bought into the dominant perspectives of Britain and Britishness – which came from the reactionary right. This saw Labour not challenge the role of the UK as a global force in the world of good, of progressive reform and advancement sitting alongside the theft and pillage of Empire, and the reactionary nature of the British state at home.

Instead, Labour bought into the Fabian and Whig view of evolutionary change, of the state as a neutral agent, and the British government as an agency which could be unleashed for progressive good. And the radical tradition of the Labour left – from Nye Bevan in the 1940s and 1950s, Michael Foot in the 1960s and Tony Benn in the 1970s and 1980s – bought into their own version of all this believing the central British state could be captured and used as a battering ram to deliver socialist change and its anti-democratic nature used to overcome resistance.

The above Labour take on Britain did deliver major change in 1945 and 1964. But what it did not do was challenge the idea of what Britain was, nor formally reshape and democratise the institutions of government and state, and take on the concept of what Andrew Gamble called ‘the conservative nation’ – meaning the forces of power, privilege and enforcing inequality, which go way beyond the appeal of Toryism.

None of this is some side show of political abstracts while Labour built its ‘New Jerusalem’ of the NHS and welfare state. Rather, Labour has had to compete on the inhospitable terrain of a right-wing reactionary Britishness defined by the legacy and traditions of Britain as an imperialist power.

Hence, on immigration: from Jim Callaghan’s 1965 Immigration Act, to Gordon Brown’s ‘British jobs for British workers’ appeased the right. Labour’s continuation of UK defence policy slavishly following the US and supporting the retention of UK nuclear weapons leaving little room for a distinctly progressive policy. And the historic ill-ease Labour has felt towards Europe – seen in Attlee and Gaitskell detachment from the start of European unity and co-operation, through Wilson’s many U-turns, up to Corbyn’s role in Brexit, fed an insularity and superiority in British Labour. Add to this Labour’s long running problem with Ireland, the division of the island and reunification – which the party shunned and tried to pretend did not exist as a subject until well into the 1980s – and there is a long record of Labour being shaped and continuing the conceit of British exceptionalism.

It is in this context that the current debate on Labour, patriotism and the Union Jack flag should be seen. The party’s deep-seated ambivalence with Britishness and the contradictory pull of different stands of thought have shifted it in different directions. Underpinning all of them the Union Jack flag is just not seen as a flag of Labour, labour or the people, but associated with Empire, wars and Toryism. And for many the English flag through the years until recently has been seen as no better – with Emily Thornberry infamously sneering at the flag flying in front of a Rochester house beside a white van. Flags and symbols matter, as do the relationships that political ideas and movements have with them.

What Britain or part of Britain does Labour now stand for?

Labour’s unease over Britishness used to be countered by the anchor provided by the labour and trade union movement. But the decline of the traditional institutions and values of Labour’s coalitions have left the party not only not anchored in and representing any social constituencies, but something even more problematic. Labour has become a party outside of its London heartland not rooted in or representing any social groups, interests or parts of the country. Hence it has promoted a vacuous, vague politics of generalities which does not grasp that it has evolved into a politics of speaking at people: in the North, Scotland, Wales, working class and precariat employment, and telling them what is in their best interests.

This has had grave consequences for Labour politics – allowing it to be portrayed as elitist, metropolitan, cosmopolitan and worse by its enemies. It has had huge negative effect on its electoral appeal. Labour has declined to the point of becoming a marginal force in Scotland, is under significant threat in Wales, and has an acute English problem. The party has only ever won the popular vote in England on six occasions ever – and has not finished ahead of the Conservatives in England in twenty years: since the 2001 UK election – Blair’s second term and pre-Iraq War. Labour has historically not talked about England, subsuming it in the story of Britain, but after Brexit that will no longer do; and England cannot be the only nation of the UK that progressives and the left dare not speak of or tell a story about.

How the party addresses this set of predicaments will not be easy and has no simple solutions. There is an awareness of the scale of all of this in many places. Last week a report commissioned by the Corbyn leadership, ‘Remaking the British State’, proposing a radical democratisation of Britain and dismantling of the concentration of power at the apex of the centre was finally unofficially published; it had meant to be produced towards the end of 2019 but was pulled at the last minute. This embraced the idea of UK-wide federalism which it talked about in principle, offering no detailed plan, but was powerful and persuasive as critique declaring unambiguously: ‘The UK is now stuck with the relic of an imperial state in a post-imperial world.’

What this wide-ranging and in places impressive report did not do was two-fold. First, despite its critique it did not detach Labour from the fetishisation of parliamentary sovereignty and absolutism: the mirage that used to inform the myth of ‘socialism in one country’ and which fed the Brexit obsession. Second, in terms of critiquing and radically remaking the British state this would have to involve using the full force of Labour aiding the creation of a popular alliance for change – rather than just summoning it from on high in a 234-page detailed report.

Thirty years of post-war Labour Governments have many significant achievements but what they did not do was fundamentally alter the idea of Britain, take it back from the reactionaries, and make real the progressive country that many hoped to live in. There are many reasons for this but central to all the political shortcomings and failures at various times is the unfortunate truth that Britain was and remains at its core an Empire State – and that this is still integral to the idea of Britain.

All around Britain the legacy, traditions and stories of Empire are everywhere: controversy over statues, street names and bequests as well as names of buildings, Britain’s role in slavery, and its global role at its height as a world power and how its elites see the UK’s role now and in the future. Brexit was an act of self-delusion saying that the UK was fundamentally different from our European countries, one informed by a belief in our exceptionalism and the hold of reactionary Britain. Much more seriously and profoundly than the statue debate, at the heart of all this is the reality that the UK is an Empire State to this day: a state not build for the health, well-being and livelihoods of its citizens, but based upon militarism, colonialism, xenophobia, and seeing the relationships which the UK embodies at home and abroad as about dominance, subservience and control.

It would be uplifting if it were otherwise, but more than flags and patriotism, Labour and radicals need to get their core proposition and mission right. Who do they represent and why, what kind of future can they feasible paint across the nations, region and people of these isles, and how do they dismantle the rotten edifice of the Empire State? To not answer and confront these challenges is to collude in the maintenance of the unequal kingdom that is sadly the state of contemporary Britain.