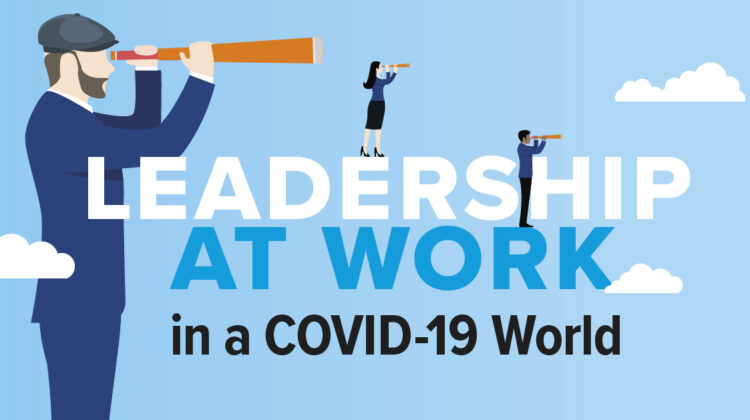 Leadership in a Cold Climate: COVID-19 and the Emerging New World

The inauguration of Joe Biden as US President is part ritual, part celebration. At its heart is a reaffirmation of the power of democracy and the belief that even in divided, difficult times leadership can make a difference. This raises questions about the role and expectations of political leadership – not just in the US, but in the UK and here in Scotland.

We live in an age where traditional models of leadership and the attitudes around them are discredited, but many – including the political elites – still cling to them. Traditional UK leaders in the 20th century – like Churchill and Thatcher from the Tories and Attlee and Wilson from Labour – were creatures of their age, running the UK from the political centre and seeing power as flowing from Downing Street and Whitehall. On the Tory side, Churchill and Thatcher were warriors leading crusades and wars; while Labour’s Attlee and Wilson were domestic builders, incrementally creating institutions such as the NHS and Open University which long outlasted them.

Attlee may be lionised on the Labour side and Churchill on the Tories, but their type of leadership is no longer possible. Both leaders, who served together in the wartime coalition – with Churchill as Prime Minister and Attlee his deputy, were sustained in office by a deferential, tightly organised society with strict boundaries and demarcated lines of class, attitudes and behaviour.

Today political leadership across the Western world is in crisis. It is no accident that the last three Tory UK Prime Ministers – David Cameron, Theresa May and Boris Johnson – have been weak and presided over failure. The Tory tribe is in decline as a culture and way of life – their number of members and pool of talent that they can draw from is dwindling away, and their outlook is increasingly at odds with the reality of modern Britain.

Labour leaders over the same period have not fared any better. The Blair-Brown era – a mixture of technocracy combined with going with the grain of power and privilege – has been discredited. Since then Labour experimented with Ed Miliband’s mild displeasure at New Labour; Jeremy Corbyn’s oppositionalism and rupture with all Labour’s past, recent and less recent, and now Keir Starmer’s respectable opposition. None have proved effective, leaving the party with four election defeats in a row and a decade plus out of power.

In Scotland after two decades of the Scottish Parliament we can offer some tentative assessment of how we do political leadership, and what lessons if any can be drawn. Over the period the role of the First Minister has changed and become more defined and pronounced, first under Alex Salmond and now Nicola Sturgeon. But this has also come at some cost, drawing attention and status away from other Scottish Government ministers.

Scotland pre-devolution was run by civil servants, advisers and technocrats who acted as an insider class. Pre-Parliament, they were subject to the most minimal and nominal scrutiny and accountability through the Scottish Office team of ministers (who themselves were sometimes not accountable to the people of Scotland such as in the Thatcher and Major governments).

This may seem a world away compared to the present where we have a Scottish Parliament and Government, but truth be told inside the system there remains the attitudes of that administrative class: a benign, enlightened but ultimately elitist Scotland believing it knows best, which has hamstrung wider leadership and democracy.

If we look at the challenges we face now, and in the future – COVID-19, climate change, the economy, and pressures on democracy – all this and more necessitate a different kind of leadership. Devi Sridhar of Edinburgh University believes that leaders in this pandemic – particularly successful ones – have had to “act in the fog” and make decisions that are “hard, fast and quickly” without having all the facts and evidence in front of them, but using a mixture of science, trends and their judgement.

In this some leaders have emerged with their reputations enhanced for making clear and bold decisions. Jacinda Ardern, New Zealand Prime Minister, took an early decision to close the country’s borders, something the UK Government is still dithering on one year into the pandemic, and New Zealand has seen as a result an incredibly low death rate from COVID-19:  25 people in a country of 4.9 million. Ardern has reflected: “To me, leadership is not about necessarily being the loudest in the room, but instead being the bridge.”

Looking at the condition of the United States after four years of Trump and inauguration of Joe Biden, the American writer Tom Nichols in The Atlantic said this week that leadership entails “understanding that ideas, actions, and words matter.” But even more, what flows from this: “It is the burden of knowing that we own our decisions, that our actions have consequences. It is the sense of responsibility that helps us to act without being ordered to act, the instinct that tells us, even when we are alone, [and] that we owe a duty to others.”

Yet political leadership involves a whole host of other characteristics. For example, leadership aspires to represent the entire nation as well as distinct social constituencies and communities. This was once – in Clement Attlee’s time – seen as a more intimate, grounded relationship, but it is now more remote, even broken, with the examples of Tony Blair’s connection to the labour and trade union movement when in office, near to non-existent. Restoring connections between movements and leaders without hankering after past practices, while still being organic and authentic, is one of the great challenges of the age.

Then there are issues of the mandate and the permission that leaders have to affect change, some of which comes from the popular will, but some from how leaders interpret and shape any mandate they have. Related to this is accountability, with decisions having consequences not just at election times but throughout elected office. As important as how national leaders arrive in office is the question of how they can be removed: a question which has haunted the USA of late with the two impeachments of Donald Trump.

The world we live in is in flux, full of huge uncertainties and contradictions, of unparalled wealth and crippling poverty and injustice, of enormous acts of compassion and empathy sitting side-by-side callous indifference and selfishness. In the past week, as the number of people in the rich world vaccinated for COVID-19 reached 40 million, the entire total in poor nations was the grand total of 25 individuals. We all need to think about how we want to come through the pandemic – and what we want life to be like in the new times.

This is as true of Scotland as anywhere. We have to grow as a nation and community where leadership entails having open conversations about the direction and choices the country faces. This would include talking about the damage and exacerbation of inequalities caused by COVID-19; addressing where power lies in relation to Scotland and the UK, and honestly discussing the medium and long-term future of the country including getting into the details of independence.

Vaclav Havel described the act of leadership as follows: “The exercise of power is determined by thousands of interactions between the world of the powerful and that of the powerless, all the more so because these worlds are never divided by a sharp line: everyone has a small part of himself in both.” This becomes even more acute in an age of dramatic power imbalances and where the new capitalist elite believe they have the right to do anything.

The next leadership after COVID-19

Across the world, emerging leadership which has to face up to the big issues is not yet visible. We can see the forces of reaction, opposition and denialism who want to take the offices, power and status of leadership but act with irresponsibility and immaturity which has, in the likes of Trump, a profound unseriousness at its heart and which treats the public not as adults and citizens but overgrown children having their worst impulses satisfied.

There are the serious leaders trying their best in this cold climate like Joe Biden, Jacinda Ardern, Angela Merkel, Nicola Sturgeon. It is clear that in their commitment to public service they are trying their best in relation to COVID-19, but this still leaves huge challenges for them and us as Tom Nichols comments, stating: “Biden cannot rescue us from ourselves, but he can give us an example to follow. He can remind us that we live in a serious, and dangerous, time. He can talk to us like adults, and demand in return that we listen like adults.”

Joe Biden is clearly at 78 a transitional leader from the old traditional model to a future as yet unmade. But if we are to begin to sketch that outline of future leadership, and live and breathe it, what would it look like? Firstly, it would have an emotional intelligence and recognise that life has pain and loss that needs to be honoured. Trump’s last words as US President failed to mention once the 400,000 US citizens dead from COVID, whereas Biden’s inaugural address put them – and national loss and hurt centrestage – including a silence which David Kessler, author of Finding Meaning: The Sixth Stage of Grief, called “the first national moment of silence” for the American deaths caused by COVID.

Secondly, leader have to be able to navigate the boundaries that Vaclav Havel talked of – between the powerful and powerless – understanding the grotesque inequities of power in the modern age and the new concentrations of wealth and privilege which have emerged in recent decades. These will have to be held to account and radically reformed as previous examples of monopoly capitalism have been, or they will increasingly define, control and ultimately limit our very humanity.

Thirdly, leaders have to emphasis the community and connections that we have as human beings, from the fact that they originate and are located in wider movements, tell stories which make people see themselves as part of something bigger than themselves, and which put at their centre that we are more than isolated individuals, but have a shared future on this planet which we have to work out together.

Fourthly, none of this can come about unless all of us are honest about the scale of our broken politics, battered and diminished democracies, and bruised, hurting societies. Inequities in Scotland, the UK and world did not begin with COVID-19. But a world in which one year into a pandemic 25 people from poor countries have been vaccinated is a global order rotten to the core, with little virtue or humanity, and no justice.

Lastly, leaders reflect us and we see part of ourselves in them and we have to together find a way of embodying the best of ourselves in our leaders and politics, finding a courage and honesty to chart a course out of this wreckage for humanity. This would not take us back to the failed old order, but map out a new direction and age when we all accept that we are interconnected and have a responsibility to look out for one another.