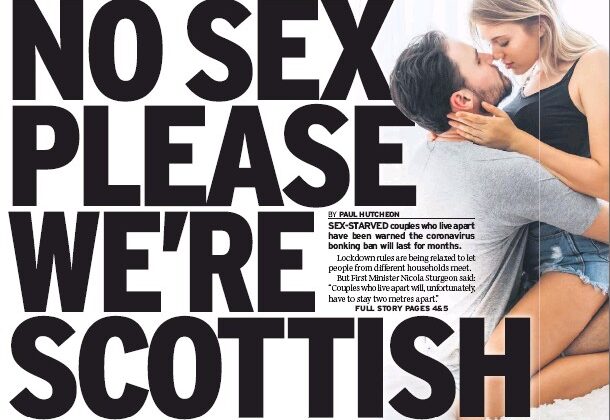 ‘No Sex Please we are Scottish’: The rise of the Scottish miserabilists

These are times of huge challenge – globally, in the UK and Scotland – and an age where we need to get serious, mobilise and prioritise given the scale of problems humanity and the planet faces.

Too often the big problems of our age struggle to get time and attention. These include the climate emergency and the urgent need to rethink economic growth. There is the march of AI and how work and employment will change in the near-future. There is the economic and ideological straightjacket of the past four decades called ‘neoliberalism’ and whether it can be reversed; related to this are the huge concentrations of power seen in tech and corporate capitalism. And finally, there is how we defend and deepen the political democracy we currently have and stop the forces of authoritarianism and nascent fascism.

Those are five fundamental global issues – all huge and profound, with all having existential consequences. Added to these, in Scotland, we have to address the reality of living on an island with an increasingly authoritarian, populist government happy to pay fast and loose with the truth and due process. Even more seriously as the traditional characteristics of Toryism collapse (tradition, deference, religion) we are increasingly seeing the rise of an intolerant, brutal partisan conservatism that is open to trashing the rule of law, international treaties and obligations while accruing power and authority to itself while stymying independent bodies that may challenge the political centre.

Despite all this a large part of Scottish public life has become disproportionately obsessed with issues that, while important, are projected by some as almost fundamental life and death issues to the exclusion of everything else. One such example is how the issue of trans rights has become framed in opposition to women’s rights by some, making it more difficult for these two sets of rights to be reconciled.

In the past week another controversy has joined this list, causing an explosion of anger and indignation in the margins of public debate and in what is left of the mainstream media. This is the Scottish Government’s survey of school age children about their sexual knowledge and sexual behaviour.

This has produced a host of lurid headlines in a number of newspapers such as ‘Explicit Scottish public sex survey ‘not confidential’ (The Herald on Sunday); ‘Outrage over explicit sex quiz given to pupils aged 14’ (Scottish Daily Mail); and ‘’Perverse’ Public Sex Survey Halted’ (Greenock Telegraph).

A host of moral conservatives including a smattering of Alba Party supporters have taken to social media to accuse the authorities of the most heinous and sinister of actions and motives – namely trying to corrupt our children, end their childhood and innocence, coercively sexualise them and in the most extreme accounts equating this to being almost state child sex abuse.

Take Tanya Carter, spokesperson of the Safe Schools Alliance, who was quoted stating that asking children below the age of consent about sex could ‘normalise abuse’. Jo Bisset of the parents’ group Us For Them Scotland commented: ‘The constant desire from the government to force kids into growing up too quickly is puzzling.’ One parent questioned whether children had the understanding to undertake this survey, saying ‘How do you answer whether you have had sexual intercourse?’ which surely begs the answer through an enlightened and factual sex education at school.

A host of voices prone to over-excitement and over-statement have gone even more over the top – bringing together as this does the subjects of sex, children, the state of education, local government and the Scottish Government. Many claimed the survey was not confidential or anonymous (both untrue), and there is also a degree of discretion allowing local authorities to tailor and adapt the questions or not use it all (West Lothian being the first to decide to do the latter).

And in the Courier and Advertiser Cheryl Peebles said: ‘Can you imagine the potential consequences for the 14-year-old who confesses to the full house of sexual activity, unaware he or she has been seeing doing so by a loose-tongued classmate?’ seemingly forgetting that this is a confidential survey. And amongst the political parties, the Scottish Conservatives issued a statement saying that the survey asked ‘schoolchildren intrusive questions about sex’ which was ‘inappropriate’ and should be withdrawn ‘immediately.’

Is this really back to a dark future?

To some this is the return of a dark, oppressive Scotland and the land of nightmares. Neil Mackay, ex-editor of the Sunday Herald commented that: ‘We are reverting into a bitter, small-minded wee country’. He then asked whether we wanted to bring up children with little knowledge and understanding of sex and their own bodies: ‘Kids risk having their lives ruined without honest information and advice. Didn’t we quit this Mary Whitehouse moral majority dangerous bullshit years ago?’

Some of this has too close echoes of the Section 28 debate just over twenty years ago in the early days of the Scottish Parliament. Then the mainstream media led by the Daily Record gave voice to a campaign of homophobia, scare tactics and unsubstantiated fear, while the only unapologetic voice for LGBT rights and equality was the Sunday Herald. Large parts of the media and society equivocated, felt embarrassed and just buried their heads, hoping that the controversy and heat would go away.

It did not go away. Instead a cultural war was unleashed which produced partly by accident Scotland’s first ever public debate about homosexuality. It was uncomfortable but cathartic, flushing out all sorts of fears and paranoia – as well as unapologetic homophobia. The forces of equality were forced to take them on and won the debate, not just the parliamentary vote, but the wider debate with Scotland becoming a more liberal country in relation to LGBT rights.

Until recently, when aided by our febrile public mood, a host of intolerant perspectives and conspiracy theories have gained traction. But the Clause 28 debate gives us a couple of pointers worth reflecting on in the present.

First, arguments for greater equality cannot win by stealth – which was the Scotland pre-Section 28. The case for equality, for liberal sex education, for treating children with respect, has to be publicly made and restated all the time.

Second, the forces of moral authoritarianism represent a very small part of Scotland – one very vocal and over-cited in parts of the media. Groups like Us For Them Scotland and Safe Schools Alliance are tiny organisations given disproportionate space. Similarly, the Alba Party of Alex Salmond are a micro entity in terms of popular support – getting 1% in the most recent poll and being wiped out in the recent Scottish elections.

Third, the role of media is critical. Twenty years ago, there was a nervousness and unsureness in responding to and reflecting a more liberal Scotland comfortable with lesbian and gay people, talk about sex and sexuality, and other issues of diversity. Today large parts of the print media are hollowed out and read by a predominately older audience who are more conservative on such issues. This has led to the rise of a reactionary clickbait commentary in papers such as The Herald where various voices write often inflammatory pieces to play to the worst instincts of part of the paper’s declining audience and to cause wider waves and hence get noticed.

Fourth, beyond media platforms there is a strand of Scottish public opinion (some of which was once liberal and thought itself progressive) including McKenna and Iain Macwhirter who have grown disillusioned and bitter with today’s Scotland. They don’t like the march of social reforms, with McKenna once writing of a ‘liberal junta’ dominating Scotland and yearning for a return of the prescriptive moral authoritarianism of previous years when what the Catholic Church said on issues such as abortion and homosexuality really counted.

It is true that controversy is part of what it is to live in society, and modern society even more. But we have to have a sense of proportion, humanity and empathy. The forces of the most virulent moral conservatism have little sense of proportion, compassion or care, merely wanting to condemn and hunt for villains, and this behaviour can sometimes inspire individuals to take actions – whether online or in reality – that can intimidate, undermine, frighten or hurt others.

Yet there is even a bigger point. Who we are and what we become is defined by what we discuss in everyday conversation. Do we really want to be defined by the heated discussion of the latest supposed cultural war controversy – another one of which will be along shortly to take up time and energy?

Or can we say that we refuse to be diverted and instead recognise the tough times we are living in – without even mentioning COVID or Brexit. Do we want to bring our focus, resources and imagination to the existential issues that humanity and the planet faces such as climate change, how we address AI, the economic calculus of neoliberalism, crony capitalism, and the march of authoritarianism and assault on democratic norms?

This will require nearly all of our attention and courage if we are to have a chance of doing the right thing. For some it is easier to hide in the excuses and evasions of becoming fixated about what are, compared to the huge issues, relatively smaller. No one should say such areas don’t matter but we have to have a sense of proportion and not give space or succour to those who peddle hatred and bigotry.

This of course is not just a Scottish problem and one found across the world but we also have real world challenges to face. We don’t have the luxury or the time anymore to not act.