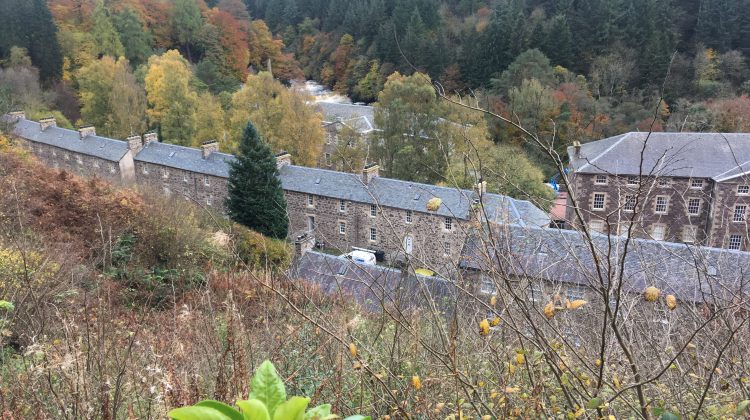 Robert Owen and New Lanark: A vision of society relevant to Scotland 2020

It’s hard to be hopeful in these stressful times. It is not unreasonable to suggest that there is a widespread and corrosive sentiment at large in the UK – and much of the West – that the current unsatisfactory state of the world is the best we can do (minus a tweak or two) – and that fundamental change for the betterment of humanity and the world isn’t really possible.

Our collective past should teach us not to listen to pessimism, while the grip of this mindset underlines that we need to better understand past economic and social gains, struggles and moments of major enlightenment. One of the most powerful – situated in Scotland and with relevance here, in the UK and internationally – is the model village of New Lanark established by the industrialist and philanthropist Robert Owen and which is today an UNESCO World Heritage Centre.

New Lanark is situated in a picturesque, stunning location at the Falls of the Clyde. It was opened in 1786 by David Dale as a site for cotton mills with nearby accommodation for workers, and taken over by Welsh-born Robert Owen in 1800. Owen then began to implement a series of far-reaching progressive and humanitarian policies to run the mills and wider community that then led him to advocate for wider change in 19th century Britain.

I have long had a connection with New Lanark; first visiting with my parents on a day trip from Dundee in 1979. At this point the mills had ceased production (in 1968), and there were the first visible signs of New Lanark changing into a conservation village with some of the mills and mill-workers’ accommodation being converted into flats. I took pictures of this site in transformation, and three years later I chose the life, times and influence of Robert Owen as the subject for my Sixth Year Studies history dissertation and revisited the photos I had taken that day.

New Lanark was pathbreaking in its day – and its influence still lives on. Owen radically altered working conditions in terms of hours and conditions and (critically at the time) child labour – banning children under the age of ten from working, while at the same time preventing children from entering poorhouses and outlawing them being beaten. This was at a time when unregulated brutal capitalism refused any restrictions on the use of children in factories. Owen became an advocate for an eight hour work day and coined the slogan: ‘eight hours labour, eight hours recreation, eight hours rest’.

Owen widened education provision in the community and created a system of primary and secondary school education which was hugely enlightened for its day – with the main school building called the Institute for the Formation of Character. These teaching methods were hugely enlightened, and lacked the harsh systems of punishment and punitiveness which was the norm elsewhere and valued and respected children, their growth and development as individuals. Michael Roy of Glasgow Caledonian University states: ‘This is the site of the world’s first kindergarten’ – although the word itself came later – critically, ‘the concept was invented here, to my knowledge.’

Owen showed at the time that it was possible to be a social reformer and successful capitalist, and thought that the self-evident results from his approach would mean that other industrialists would change when they realised the error of their ways. He approached Westminster parliamentarians to produce the first serious attempt at factory law and restriction of child labour but after patiently presenting compelling evidence to Lords and MPs was shocked to meet resistance; this under the oppressive Tory Premiership of Lord Liverpool when all sorts of assembly, due process and the rule of law were being attacked and undermined.

Owen’s experience in advocating and lobbying for what became the Factory Act of 1819 expanded his understanding of the political process. Up until this point he was a benign paternalist liberal thinking he understood best the interests of workers, and that an accommodation could be made between labour and capital. Confronted with the harsh views of the British ruling classes, who treated workers as their property and in effect slaves, he became a radical; questioning the entire capitalist system and believing that only socialism could bring about system change.

Owen’s socialism has been called ‘utopian’, in contrast with the supposed ‘scientific socialism’ of Marx and Engels. In 1825 Owen went to the US and made the case for co-operativism, addressing the House of Representatives – including the outgoing President James Monroe and President-elect John Adams – ana plethora of former Presidents. This led to the idea of forming the socialist co-operative, New Harmony, in Indiana that did not get off the ground and was abandoned. Back in the UK Owen attempted to set up a single general trade union – the Grand National Consolidated Trades Union (GNCTU) – which failed, due to the repression of trade unionists such as the Tolpuddle Martyrs in 1834 and organised labour seeking other less grandiose solutions in worker organisation than one national union.

But in this journey Owen’s encouragement of co-operatives left behind a legacy that encouraged others and established a fertile environment which provided an ethical basis for much of what was to become British socialism. Time and again over the years centre-left politicians in Labour and elsewhere have cited Robert Owen – often alongside Robert Tressell (author of ‘The Ragged Trousered Philanthropist’) – more than Marx and Engels.

Robert Owen’s work and legacy is relevant today when we look at the state of society, work and huge inequalities and disparities in income and wealth. James Frederick Rees in the ‘Dictionary of Welsh Biography’ describes Owen as a ‘pioneer in factory reform, the father of distributive co-operation, and the founder of nursery schools’. Last week I visited New Lanark for the first time in over a decade and, in the midst of a pandemic with few people about, its beauty, scale and ambition even more struck me as profound, long-lasting and relevant to the Scotland and world of 2020.

Michael Roy observes that New Lanark is relevant to students, and all those who are curious minded and interested in ‘social enterprise, social entrepreneurship [and] social economy.’ Owen’s ideas influenced the evolution of socialist thinking across the world in the 19th century and after; Roy states students and scholars visiting here come away with an understanding of ‘what was being attempted and the impact it had worldwide.’

Roy observes of visitors to New Lanark: ‘They start to appreciate the influence that Scotland (and Owen’s ideas in particular) were on the ideas of people like Karl Marx, Karl Polanyi and so on. Both of whom were genuine admirers (but critics too) of his approaches.’ The reach of New Lanark goes on to this day with Roy stating: ‘New Lanark regularly hosts delegations from all over the world, particularly Japan and South Korea who consider it the spiritual home of the co-operative movement.’ That is more than can be said for many of the Red Clydesiders and radicals that the Scottish left has eulogised sometimes to the point of making them out to be saints.

Robert Owen is a standard bearer of standing up to the dehumanising, selfish calculus of the capitalist logic of exploitation. He experienced first-hand the grotesque priorities and self-regarding self-interest of the British ruling classes and realised that they would never change their ways out of enlightenment but only through the force, power and numbers of a politically active socialist movement. That lesson was learnt by organised labour leading to the establishment of trade unions, the TUC, and ultimately the Labour Party: there is a direct link from Robert Owen’s socialism to the politics and commitment of Keir Hardie.

Owen did not have all the answers then or now. He first believed in his own benign wisdom, then became an adherent of co-operatives and socialist communes, and after the failure of his New Harmony experiment, embraced millennialist socialism which in his lifetime led to his marginalisation and ridicule.

Today New Lanark is a beautiful place to visit – a piece of history and an insight into social reform and change in an age of overbearing oppressive capitalism in the 19th century which still exists in the present. New Lanark’s journey as a conservation village through the work of the New Lanark Conservation Trust over the last forty years has much to commend it and has won many plaudits. Yet it is also true that in today’s financial environment the pressures on such trusts can often erode their fundamental values and founding principles, which in this case directly link to the ideas of Owen. In recent years, the trust have increasingly turned their back on social housing and embraced New Lanark as a prospective property development opportunity, meeting resistance and dismay from some residents, and contributing to a feeling of betrayal and loss.

Hence Robert Owen’s example, work and ideas are of as much relevance today as they ever were. Understanding the need for humanity, enlightenment in work and treating workers with respect and not as commodities; the importance of co-operatives and embracing the advance of economic democracy; the importance of childhood development and education; and recognising the brutality and ideological dogma of the British ruling class to maintain their rotten, venal, self-serving order at the expense of leaving millions in penury and insecurity.

All of these insights and more are core to Robert Owen and his work in New Lanark and elsewhere. Maybe as Scotland faces the big questions about its future over the next couple of years, we could pause and reflect on the relevance of Robert Owen who was practical and pragmatic at times and a visionary and utopian at others, but who lifted people up, changed lives and understood that the vested interests at the core of the British establishment will only yield when they are forced to.