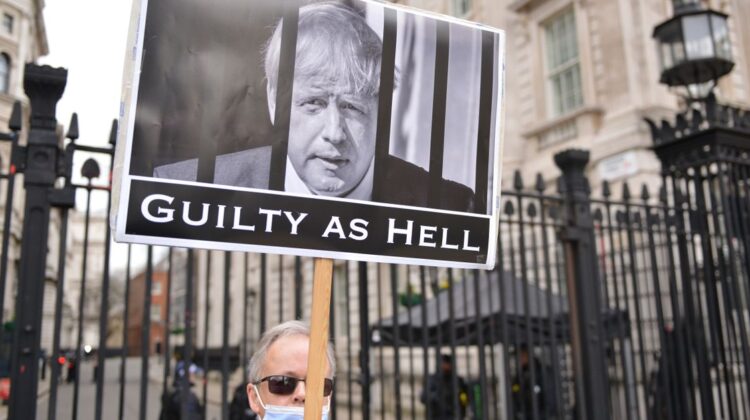 “Scotland deserves better than this”: the broken UK constitution

The reputation of the UK PM is in tatters; UK Government is in chaos, denial and vengeful; Toryism has become toxic again and the stories of Boris Johnson’s misdeeds and blatant lies have become the object of anger, indignation and satire.

A backdrop to all this is that what passes for the British constitution is literally falling apart – buckling under the pressure of a government and individuals who don’t accept the rules and think they can gather unchecked power to themselves.

There are short- and long-term factors. Not only is Sue Gray, the civil servant tasked with looking at all the Downing Street parties, examining the PM’s behaviour – she is reporting to the PM who will then adjudicate on himself. It is a pattern. Lord Geidt, the PM’s ethics adviser, who examined the finances of the Downing Street flat refurbishment, reports to the PM.

The traditional system of British government and its checks and balances relied on what academic Peter Hennessy called “the good chaps theory of government” – one that was patrician and class-based with pals who have known each other since school and university looking out for each other in a benign and elitist way.

That way of the world has been on the wane for decades – weakened by British economic decline, the impatience of Thatcherism and New Labour and PMs who wanted to get their way in a hurry no matter the cost.

The Tories have always treated what there is of the British constitution as their own personal property but previously this general set of constraints and an older Toryism – of the likes of Macmillan, Alec Douglas Home and Heath – restrained them to an extent.

Conservatism now lacks any such constraints. This government wants to rearrange the UK to take power to itself, reward its friends with billions of public monies through illegal VIP channels, and to openly shaft and destabilise serious opposition wherever it is found: such as the BBC, the Electoral Commission, courts and juries.

Tory MPs routinely say things now like: “if juries are the problem we should consider getting rid of them”; “the BBC is state-run socialism”; and “the Electoral Commission needs to be cut down to size” – all about institutions which have shown opposition or independence of mind and judgement. This is the mindset of Putinist Toryism.

At times of crisis there is at least the prospect of reform – but what chance a new constitutional order coming about? Three previous UK moments have occurred: the 1919-20 Speaker’s Conference on UK constitutionalism, the 1973 Kilbrandon Commission on devolution, and the 1997-99 constitutional reform by New Labour. None managed to make a new constitutional settlement – even though the latter saw the creation of the Scottish and Welsh Parliaments, Northern Ireland and more.

Now some are putting faith in Gordon Brown’s Labour Constitutional Commission – which ignores the party’s conservatism in this area. Others put hope in “devo max” or some kind of “third option” for Scotland – ignoring that any Scottish only proposals do not address the UK political centre and its relationships with the rest of the UK.

There is a strange irony in this. Namely that pro-union opinion continually poses Scottish devolution and greater powers coming to Scotland as “separatist”. In that they ignore the need for British democratisation, just think Scotland can continue to change on its own, and avoid pan-UK change and the nature of Westminster and Whitehall.

Scottish-only change worked in the period of 1997-99. Scotland got a devolved Parliament when we wanted one, there was a consensus and a detailed plan, as well as a head of steam here to bring it about. Those sort of conditions don’t exist forever – alongside UK buy-in.

The late Nigel Smith, who created and led the cross-party campaign for a Parliament in 1997, was frustrated at people in Scotland and the UK who wilfully did not grasp this, saying: “You cannot reform the UK by continual Scottish constitutional coups – just taking more powers unilaterally – in the UK.”

One can understand part of Scottish opinion making this mistake, but the mindset of the UK political centre is more sinister. In short, it sees significant constitutional change as not about them. Their actions, power and privilege are not the problem; change is about far distant places they know and care little about.

The broken UK constitution may not work for most people in the UK but it does work for some. It works to the self-interest of the Tory Party who win office repeatedly on a minority of votes. It works for the increasingly hysterical right-wing press such as the Daily Mail and Daily Express who can foster a narrow blinkered, xenophobic view of the world and influence the main Westminster parties.

It works for the insider world of right-wing think-tanks, lobbyists and corporate interests who know how to work the corridors of power. And damningly, it works for the shadowy world of dodgy and dark monies, foreign oligarchs and foreign governments – just ask China, Russia or Saudi Arabia.

This means that dismantling this rotten, undemocratic, feudal constitutional and political order will be met with fanatical resistance – from an alliance of the old and new establishments of the UK. Any reform suggestions have to grasp this and the historic buy-in of both the Conservative and Labour Parties to this state of affairs.

Worryingly, Boris Johnson is not an aberration. He is a product of the crisis, decay and malaise of British Conservatism and constitutionalism. Unless people wake up the future post-Johnson could be even more nasty, bitter and broken – and working even more for those insider groups whom the current system serves rather well.

“Scotland deserves better than this” politicians like Gordon Brown are want to say about the state of the constitutional debate here. It is true in a wider sense about the broken, indefensible nature of British politics and constitution for Scotland and the vast majority of the UK. Breaking out of this wreckage and smashing this order has to be central to any politics both in Scotland and across the UK.