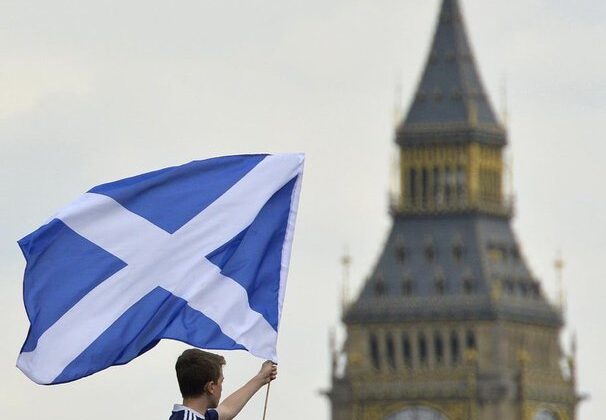 Scotland no longer defines itself and the world through England

The Scotland v England fixture returns – Wembley, the Tartan Army, English commentators talking nearly exclusively about England, with Gazza’s 1996 goal now replacing the once constant references to 1966. It is almost as if nothing has ever changed. Almost.

This is the original and oldest international fixture in the world dating back to 1872 – the foundational rivalry of international football, and one with great history, drama, controversies and memories. It is a vital part of the story of Scottish and English, and hence British, football, and for all the English dismissal of it now as a relic of the romantic past it sheds critical light on the evolution of the game, on our attitudes (for good and bad) and says something about both nations and how we see each other.

The rich tapestry of the rivalry is well-known and well-told. The impressive quality and dominance of the Scottish national team in the formative years of the game transformed how football was played in the UK, and indeed across the world, with the Scottish influence spreading far and wide – from the European continent to Latin America.

Less talked about is the profound British insularity and condescension towards how foreigners played the game that automatically assumed that footballers who played the game in the four nations of the UK and in particular, England and Scotland, were superior in every aspect to foreigners. This blinkered perspective is often accredited and told about England, but was true of Scotland as well.

British exceptionalism and arrogance ran through all four nations – England, Scotland, Wales and Northern Ireland, who did not take part in the first three World Cups. This was because all four fell out with FIFA, withdrawing in 1928 and not rejoining until 1946. It continued long into the post-war era – with Scotland not taking part in the qualifying round for the first and second European Championship in 1960 and 1964.

The story of the comeuppance of English arrogance is ingrained in the national psyche: the humiliating defeat to Hungary at Wembley in 1953, but the Scottish account is less well-kent. Scotland did not play an international team outside the UK until 26 May 1929 when they played Norway in Bergen defeating them 7-3. They lost their first match to international opposition on 16 May 1931 when they were thrashed 5-0 by Austria in Vienna – the ‘Wunderteam’ of the early 1930s who finished fourth in the 1934 World Cup.

That insularity was fed by the over-importance of the Scotland v England game and with it being the fulcrum of the annual Home Championships. But even to this day there are echoes of the influence of that attitude – in England with their over-hyped hope that a team which one the World Cup once when it was hosts can triumph again, but which can also be seen in Scotland in places.

Take the 1967 England v Scotland Wembley triumph where England, the World Champions, were defeated by an impressive Scotland 3-2. To some Scottish fans looking for bragging rights this made Scotland ‘unofficial champions of the world’ as this was the first defeat England had endured since the 1966 triumph.

But seldom acknowledged by Scots is the context of the game. This was not just a friendly. It was part of the 1968 European Championship qualifying process, and despite Scotland’s victory, Scotland failed to qualify – taking part in its first ever participation in this tournament, whereas England did. The finals were played in Italy, won by the host nation, and England finished third out of the four nations who qualified. Yet our footballing history to this day concentrates on the symbolic victory of the Scots over the English, while looking at the bigger picture (and our failure to quality) is just passed over or not even known by many fans.

The decline of the Scotland v England game

The Scotland v England rivalry changed as international football changed and became more regular, and the monies and prestige associated with the World Cup and European Championship rose. First, the Home Championships became diminished by pressures on players and the game, with the first calls emerging for it to be cancelled from the late 1960s onward. Second, the tournament lost any prestige it once had, as international football focused on the bigger competitions. Third, within the Home Championships the commercial and sporting allure increasingly focused around Scotland v England – and thus when the tournament fell in 1984, there was an attempt to continue the oldest fixture as an annual match in the Rous Cup, but that only lasted from 1985 to 1989 (the last three with one Latin American country invited each year).

With thirty-two years without regular Scotland v England matches we have been left with the slow retreat of evocative memories – Jim Baxter’s keepie-uppie on the Wembley turf, Kenny Dalglish putting it through Ray Clemence’s legs, the Wembley pitch invasion in 1977; and the more painful ones such as Willie Ormond’s first game as Scotland manager in 1973 marking the anniversary of the SFA: a 5-0 trouncing of the Scots at Hampden, or Rangers’ Stewart Kennedy letting in five at Wembley in 1975. Slowly they begin to fade to mere shadows.

Those past thirty years have seen occasional reunions – 1996 and that Gazza goal, the 1999 Euro play-off qualifiers, the 2018 World Cup qualifiers, and now the return to Wembley for the European Championship. As time passes the once powerful, potent, even all-consuming rivalry becomes less defining in football terms, and less important politically, culturally and socially.

The two big changes for Scotland and how it saw the national men’s team was first, regular qualification for international tournaments from 1974 to 1998 – particularly the five in a row World Cups. Secondly, how politics moved on also played a role, with the establishment of the Scottish Parliament reducing the weight of national expectations that too many invested in the national team, which was at times a heavy burden.

Alex Massie got it right when he wrote this week in The Times that over those recent decades ‘Scots have grown-up. National self-esteem is no longer wrapped up in the fortunes of the national football team’. The country has become more outward looking and internationalist, and increasingly resistant in football, identity or politics to defining ourselves primarily through our relationship with England. As Massie wrote: ‘Scotland has other means of being – and showing – itself now. Our footballers’ misadventures no longer define the zeitgeist.’

The 2014 indyref and 2016 Brexit vote played a role in this: Scotland’s international profile and reputation being enhanced in the former, while the latter underlined that Scotland saw itself as a mainstream European nation, whereas sadly a majority in England did not.

Living on an island with England

In football as in all human life there are contradictory strands. For some in Scotland ‘Anyone but England’ is a badge of honour, for others it is passed off as a bit of a joke. But this cuts against and detracts from those bigger, generous changes which have happened here. Why would you want to define so much of your identity in relation to England, and to invest so much emotions in supporting whoever England is playing?

This is not a particularly Scottish phenomenon with all over the world club and national rivalries mean that some supporters take them too far. But for some seeing the Scots through the prism of anti-Englishness is always an easy trope, with Hugo Rifkind observing in the run-up to the match: ‘I remember being completely startled by how upset people were by Andy Murray’s “anyone but England” quip that time [in 2006]. Cheerfully wanting England to lose was the glue that held Scotland together.’

That latter sentiment seems quite an assertion and over-statement – with Scottish identity ‘held together’ by a ‘glue’ that includes more than football and other sports; particularly being true when in reality many people do not follow sports or invest much time and hope in professional elite sports.

What Rifkind misses is that for all its asymmetry the Scottish-English relationship is just that – a two-way relationship – where not all the problems and meaning come from the Scottish side. There has always been an English mindset of viewing the Scots as romantic, foolhardy types, who will (like in ancient times) fling themselves into the football battle with England with such clichés as ‘their Braveheart spirit’ and Bannockburn and Culloden invoked.

If there is an aspect of Scotland which could grow up a bit, there has equally always been a ‘Jockophobic’ part of England that has grown in right-wing circles in recent times and can be regularly found in the Daily Telegraph and Spectator. In the past month in the latter, Katy Balls invoked anti-English tourist sentiment in Scotland’ while the intolerant, increasingly illiberal Lionel Shriver admitted to a ‘mean streak’ when it came to the Scots, Welsh and Northern Irish, saying that they all almost deserved their freedom to see them live with the consequences: ‘Unfortunately, punishing unrealistic Scottish, Welsh and Irish nationalists by giving all these eejits what they’re demanding would disadvantage any number who don’t deserve it.’

There is the grating practice of ‘England as Britain’ – portraying England and the English experience as Britain and the UK. This has always been the English way – 1966 and all that. But now given the fragmented union that we live with, the very different political landscape in each of the four nations, and the rise of a punitive, xenophobic English nationalism which has not only driven Brexit, but increasingly does not care about the character of the union that is the UK, it matters more, and portrays a deeper and historic set of shifts.

If England really want to speak only of England that is up to them, but they should have their all-England conversations themselves, and embark on the road of self-awareness and even self-government. For today, Scotland v England is part party, occasion and drama – with a nod to the historical backdrop. But there are bigger issues to concern ourselves with – such as Scotland finally qualifying for the second round of a tournament, and even more than how the state of the union changes. There are also immediate issues such as the teams ‘taking the knee’, how English fans respond, and the terrain of Black Lives Matter and dealing with racists in the game.

Scotland increasingly feels a modern, European country; a place that aspires to be progressive, inclusive and democratic and to be involved in the international conversation. Of course we sometimes fall short of our intentions and need to recognise and act on that. But England today, despite deep anti-establishment and radical currents in its history, increasingly feels like a country which is looking to the past, is anti-modern, not a democracy and does not see itself as European.

Let’s enjoy the football today, but remember that behind it is a deeper set of faultlines and fissures, centred around the crisis of the idea of Britain, little Englanderism, the degeneration of Conservatism, and the systemic failure of Labour and the left to develop a counter-hegemonic story about Britain. All of that will determine the future more than the qualities (or not) of Boris Johnson and Nicola Sturgeon, and whether Scotland step up to the challenges at Wembley later today.