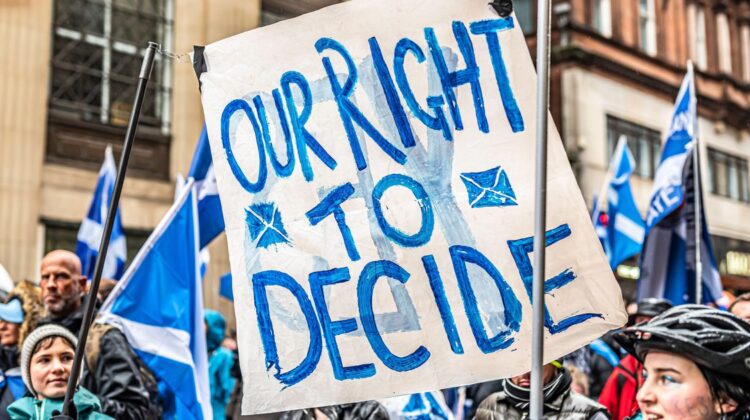 Seven years on independence has serious work to do to win

Last weekend was the seventh anniversary of Scotland’s big date with destiny on independence – and for some this is an understandable seven-year itch.

Cue the demand from some that Scotland holds another indyref as soon as possible. The previous weekend at the Alba gathering Alex Salmond made the case for an indyref in the midst of the COVID pandemic on the grounds that the 2021 Scottish elections were held against the same backdrop (when legislation would have been required to postpone them).

This is a strange political time. One thing we can say with certainty is that independence is a live issue – in Scotland and across the UK. Serious work and thinking is needed ahead of any indyref by the forces of self-government. Here are ten observations ahead of Scotland’s next big political date with destiny.

First, independence and an indyref need to be differentiated. An indyref is a means to an end, not the end itself. The end is independence that can be worked towards in numerous ways – by good politics, policies, governance, and the increasing self-government and autonomy of Scotland.

Second, independence cannot be solely focused on process to the marginalisation of substance. Thus, talking about who can call and not call an indyref and what happens if Westminster blocks a vote, all matter. But they are process politics and should never over-shadow the need to focus on substance – the why of independence rather than the how.

Third, timescales are critical. Any successful politics needs to have an awareness of different time horizons – short, medium and long-term. Continually calling for immediate action and a referendum under COVID does none of this.

It is also true that the Sturgeon leadership have been consistently vague on timing, leading to Salmond’s charge last weekend that the First Minister has marched her troops up the hill so many times since the 2016 Brexit vote that this evokes the ‘Grand Old Duke of York’.  Both politicians lack strategy here – one calling for an instant vote, the other having a gradualist approach which is always implicit never explicit.

Fourth, independence supporters need to base their politics not on the passions of the most fervent ‘Yes’ believers. Echo chambers are never a good basis for politics, and all of us would be wiser if we recognised that most of Scotland does not live and breath politics, let alone independence.

Fifth, much political analysis assumes that ‘Yes’ and ‘No’ are rival camps and tribes with little in-between. This misses the undecided, unsure and don’t knows, the change going on between these groups and ‘Yes’ and ‘No’, as well as the ‘missing Scotland’ – the term I coined in 2014 for the ‘missing million’ who had never voted in a generation, who are always with us and need reaching out to in different, imaginative ways.

Sixth, movement in the electorate is not all ‘No’ to ‘Yes’ as some think, but with the churn in all directions includes some ‘Yes’ to ‘No’. Sometimes the retort of ‘Are You Yes Yet?’ gives the impression that there is only one direction of travel possible and, worse, can come over as a reprimand to voters who have not made the journey to ‘Yes’. A politics of telling voters off is seldom successful politics.

Seventh, tone and language matters. The tone of independence has to be welcoming, inclusive and generous. It has to have a mindset reflective of the multiple Scotlands, communities and identities in this land, and never give the impression that there is one proscribed Scotland and the politics of a monoculture. Scotland’s diversity and pluralism is one of its greatest strengths and virtues.

Eighth, the politics of hope are pivotal to political change and independence. We know that hope has at times given the SNP a boost in 2007 and 2011 and independence in the last stages of 2014, but sometimes given the challenging times we live in it is easy to lose sight of that. No matter the actions of Boris Johnson and the UK Government a politics of hope must remain centrestage.

Ninth, since 2014 the only substantive work undertaken by the SNP has been the Growth Commission, since parked. It is not just that the 2014 offer needs revisited, but the entire prospectus of independence needs renewed in light of Brexit, COVID, North Sea oil, the climate crisis, and more.

Work is needed on a host of issues – but as critical is how it is done, by whom, and who it is owned by. For example, if a future independence plan emerges from the SNP inner sanctum or as in 2014 from a civil service darkroom, then this will have a detrimental effect. It would be top-down and anti-democratic, and would make activists less enthusiastic, thinking rightly that they were being taken for granted.

Finally, independence is about maturing and growing up. It is about Scottish people becoming citizens in their own land, taking decisions and weighing up the different choices a nation faces. And this entails being treated as adults by our politicians.

These last points – an adult, grown-up politics needs to be encouraged now. It isn’t easy sometimes in the day-to-day noise and charge and counter-charge of everyday politics, but that merely underlines the need not to be dragged down given the stakes.

Independence is a shared project – part of the social contract and covenant that defines public life in Scotland. It is something we all have an investment and connection in, and if Scotland becomes independent, will become true of every one of the citizens of a self-governing country: a land where there are many different kinds of Scots and multiple identities, but no such thing as ‘Yes’ and ‘No’ voters.

Seven years on we need to get down to serious work, digging deeper, embracing detail, understanding that what we say and how we say matters. There is no other option than taking such an approach. Independence can never stand still or become complacent, but continually has to evolve and embody the change people want it to be.