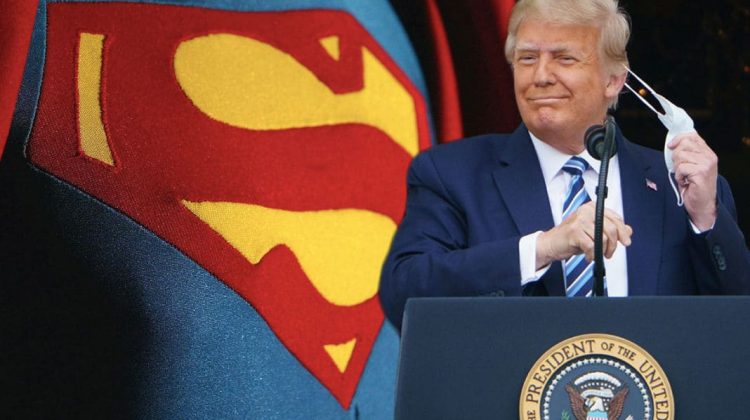 Superman is not coming to save us: Trump, Boris Johnson and Regressive Masculinity

It is not very surprising that Donald Trump was apparently considering wearing a Superman top under his shirt and then revealing it on leaving hospital after being treated for COVID. It is deeply symbolic of the allure of the Superman complex that a significant section of the public – usually men, including many of those in senior positions – are drawn to an erroneous belief in Superman as a viable form of leadership.

The world is in crisis and needs grown-up, responsible, honest leadership. One which tells the truth and says what it knows and what it does not know. One that refrains from treating people as stupid and gullible children, telling them that the coronavirus will just go away, or that a vaccine will be developed before Christmas.

Instead we have the likes of Trump, Boris Johnson, Jair Bolsonaro and Vladimir Putin invoking their caricatured authoritarian reactionary populism. Underpinning all of these – acknowledging their differences is a pumped up, bravado style of masculinity.

Traditional masculinity has been in crisis for decades. The old role models – the breadwinner male, the silent male, the absentee father, the iron man of the heavy industries, the warrior man of conflict and conquering – have been in retreat or become increasingly obsolete and anachronistic.

There are economic, social and cultural reasons behind much of this including the changing economy and retreat of manufacturing in developed capitalism; the rise of the service sector and consumerism; the influence of feminism, and an increasing recognition that emotional literacy and intelligence matter in life – whether it be work, personal relationships or just about being a contented, rounded human being.

Yet across the developed world some men have responded to these trends by embracing a petulant version of entitled masculinity which openly revels in irresponsibility and a refusal to be accountable. There are loads of examples including Rod Liddle, Jeremy Clarkson and Laurence Fox with the latter calling it ‘racist’ if anyone accurately describes him as ‘a white privileged male’. All of these men with money and status want to convince us that some people are out to get them, restrain and restrict them, and hence present themselves as victims of oppression.

This would be laughable if such an unenlightened worldview – offering nothing positive or constructive to anyone – didn’t take up space and noise, and command attention. These are grown men who have had all the advantages that can be imagined, yet somehow from their vantage point propose that they have been held back and denied more. They make preposterous, ill-founded statements claiming that the problem with our society is the tyranny of feminism, PC thinking, the left – and of course the latest cliché of the lazy thinking right, ‘the wokery’. All of these malign forces in their view have combined to somehow emasculate and hold back masculinity from being unbridled and unconstrained; while these supposed male warriors for justice adopt a faux victimisation.

The new authoritarianism and masculinity

It is no accident that authoritarian leadership across the UK and most of the world have been long associated with the politics of a regressive masculinity. There are the obvious exceptions to this rule: Margaret Thatcher being the most high-profile example in the UK. But authoritarian politics are intimately linked to notions of masculinity and a certain kind of uncompromising authority, certainty and entitlement which tend to disproportionately be found more in male than female leaders.

Politics and power, particularly in the right, have become associated with a punitive version of masculinity. Trump ripping open his shirt to reveal a Superman top might seem at first thought to be funny and bordering on ridiculous. But even more alarmingly, this was something Trump and his advisers seriously considered such is the cartoonesque world they inhabit, and critically, that they think the Trump base live in.

The Superman myth has been a recurring legend in the politics of the authoritarian right. Obviously it is there in Nietzsche, and found in 20th century form in the fascist dictatorships of Hitler and Mussolini. They brilliantly used public platforms, occasions and communications to mesmerising effect with overblown rhetoric filled with national greatness and patriotism; they hunted internal and external enemies, aiding a national unity that part of the nation was excluded from, and articulated a politics of imperialism, conquest and brutality which ultimately led to disaster and the deaths of millions.

Much of our politics and media today do not know how to handle the new authoritarianism, wedded as they are to being reasonable and supposedly balanced. Hence they often repeat the lies and deceptions of Trump and others as if they are true. Some American media have taken to chronicling the Trump lies, but more commonplace is a creeping normalisation and then acceptance of the weakening of public norms such as being caught lying having a political cost: witness Trump and Brexit in 2016.

Then there is how to understand such phenomenon. Sarah Vine, ‘Daily Mail’ columnist, married to Michael Gove, said on TV on Monday that Trump was ‘a libertarian’ in his political instincts. This showed that she has zero understanding of Trump or US politics. Trump is firmly and unapologetically an authoritarian populism – the opposite of libertarianism.

Trump’s ascent and descent is connected to the debasement of the right. It has a loose relationship with the forces of traditional conservatism and the intellectual ballast of what has been synonymous with the right: the rule of law and rules, following due process, and defence of institutions, hierarchies and elites. But there is a direct lineage from the most simplistic homilies of Reaganism and what came after it: presenting oneself as anti-government and anti-tax while presiding over a bigger state and public spending while covering all your moral ambiguities in religious piety and false moralities.

The degree of this bowdlerisation of the right-wing can be seen in the version of freedom and liberty being promoted in the Trumpian right and which can be seen in the Tories over COVID-19 restrictions. There is now a right-wing version of freedom and liberty which is about being unrestrained by authority and restrictions and advocating the utopia/dystopia of the sovereign self: a world of mankind shorn of social convention and the common good in a manner that Isaiah Berlin would never recognise.

The writer Rebecca Solnit said recently of this notion of freedom on the American right: ‘Freedom as they uphold it is the right to do anything you want with utter disregard for others (and taken to extremes, to believe anything you want, as they have about climate). In their logic, poverty must be caused by individual failings, not by systematic inequality and obstacles. Gun deaths must be disassociated from the deregulation and proliferation of guns. Taxes are a form of oppression, since no one owes anyone anything.’

The crises of masculinity can be seen all across our societies. As women across the West have gained in status, influence and become more equal in certain areas this has been seen by some men as a threat to male privilege. Some men have reacted by over-emphasising their masculinity or what have been seen as traditional male interests. One argument put forward by the American writer Mariah Burton Nelson in her 1994 book ‘The Stronger Women Get, The More Men Love Football: Sexism and the American Culture of Sports’ is that some men have as a result retreated into male safe spaces – over-identifying with football and other sports, competition, aggression and ultimately violence.

Gil Scott-Heron warned many decades ago that there ‘Ain’t no such thing as superman’. But despite their continual non-appearance, societies and politics are continually plagued by false sightings with demagogues and opportunists claiming to have these transcendental powers and sadly too many people choosing to believe them. None of this reflects well on countries which have for long liked to pride themselves as being sophisticated and seeing through chameleons and chancers.

When are we going to grow up and demand that these adult child men grow up and join the real world? The entire way we talk, live and run the world has to change and go past what the likes of Jeremy Clarkson and the ridiculous Laurence Fox think is some leftist tyranny restricting their way of expressing themselves. When will we stop public life being filled by men who flaunt their irresponsibility and dishonesty over public policy – and their private lives? Male leaders like Trump and Johnson proclaim that they can get away with the most flagrant double standards and that somehow they are above being held to account. This is about men, class and power – and multiple hypocrisies which would damn others (i.e. women or less Alpha males) to shame or resignation.

Jackson Katz has been a pioneer and has had significant impact in the US with his argument that to be a ‘good man’ it is not possible to remain silent in the face of problematic masculinity, and has been a major influence in Scotland as one of the inspirations behind the work and success of the Scottish Violence Reduction Unit.

Katz thinks that our entire language and way of describing ‘violence against women’ is wrong and that as it is currently constituted it makes women the subject and is thus silent about the problem, specifically male behaviour. He observes that: ‘It shifts the focus off men and boys and onto girls and women. Even the term violence against women is problematic. It’s a passive construction. There is no active agent in the sentence.’

Isn’t it about time, after the malevolent example of Trump, that we stop believing in Superman and persuade those who have gone along with such delusions how damaging this is to themselves and to wider society? At the same time, and less dramatically, the experience of Boris Johnson and David Cameron before him should tell us if we needed to be told about the limited abilities of Tory men who grew up from an early age believing in the divine right of their class of men to rule.

This is not an optional extra. Malevolent masculinity with its embrace of dark power and dirty politics not only trashes public standards, it does not believe it needs to tell the truth or to value facts, and is happy to play fast and loose with democracy.

It is even more serious than that. For the rise of this phenomenon of irresponsible, reprobate men has occurred in an age of crises and now COVID-19 for which they are completely unsuited. Thanks to the lack of statecraft – and a dismissal of the importance of government, experts and science – the actions of Trump, Johnson and Bolsonaro have led to the deaths of thousands of citizens in the US, UK and Brazil whose lives could have been saved, and who have had their potential and dreams cut short by the blatant inadequacies of these leaders.

Superman is not coming to save us. But believing in him is damaging to your health, that of people in your life and the society you live in. We have been warned. Unless we stop this inhumane, dishonest, vicious form of masculine leadership and hyper-patriarchy they will do much more damage; not being content until they have ripped up and destroyed all that is valuable and virtuous about the societies we live in.