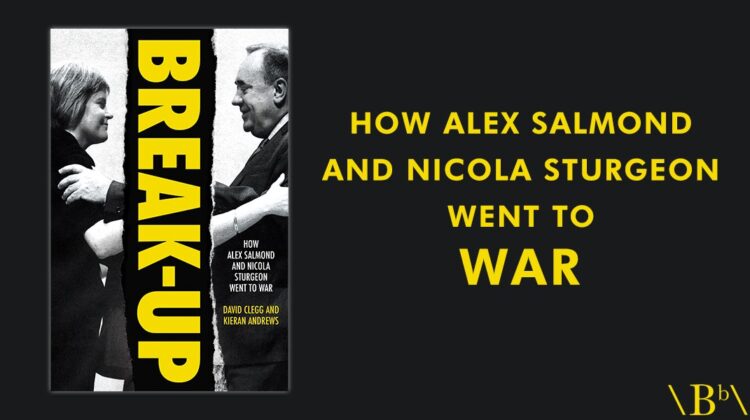 The Alex Salmond Scandal and its Aftermath

Scottish politics has been transfixed the past three years by the fallout between Alex Salmond and Nicola Sturgeon – the defining figures of the SNP over the past twenty years. This has been a saga like no other – of serious allegations made against Salmond, two court cases and judgements, a parliamentary inquiry and independent review, all of which have created huge political waves and turbulence which have not yet dissipated.

David Clegg and Kieran Andrew’s Break-Up is the first attempt to understand this dramatic tale in what is a timely, important publication. Clegg is one of the main figures in the whole episode, having been (as Political Editor of the Daily Record) the journalist who broke the story that the Scottish Government had reported Salmond to the police over allegations of sexual misconduct; and Andrews works for The Times in Scotland. In so doing the book touches on many areas: the actions of the Scottish Parliament and Government, the nature of the SNP leadership and its key personnel, the blurring of lines between party and state, and how allegations of sexual inappropriateness are dealt with.

The arc of Break-Up is on one level conventional; the chronological story of the rise of the SNP and the rise and fall of Alex Salmond. At its core is the evolution and disintegration of the Salmond-Sturgeon relationship, from the good years focusing on Salmond’s return to the SNP leadership in 2005 when Sturgeon stood aside, instead running for the deputy post, to the SNP winning in 2007. And then come the slow shadow of the bad years.

The early chapters are more superficial, glazing over momentous events which have been endlessly analysed elsewhere. But as the focus turns to the slow implosion of the Salmond-Sturgeon relationship focusing on the allegations against Salmond, how they were dealt with, and the voices of the women complainants, it becomes a compelling read.

The book comes alive in the explosive story of the allegations and investigations into Salmond’s actions, detailing the manoeuvring, positioning and calculating of some of the key players. This is an intense, often claustrophobic tale of insider politics which does not reflect well on the institutions described. No one really comes out of this well or with their dignity and reputation enhanced – not Salmond, not Sturgeon, nor senior figures in the SNP and civil service.

The only people this cannot be said of are the ten women complainants who emerge as having retained perspective and sight of what really mattered all through this: justice and doing the right thing. And as we know at every turn in this tawdry affair they were let down and betrayed by people who were either incompetent, or who leaked to the media, or who tried to use the women for cheap point-scoring – sadly true across the political spectrum.

All of this raises difficult and uncomfortable questions about the Scottish Government, Scottish Parliament, committee system, quality of MSPs, SNP, civil service, Crown Office and wider legal establishment at the highest level that require consideration, reflection and some answers.

One concern is accountability and due process. At each stage the women complainants were failed – horrendously so. Part of Scotland saw them as acceptable collateral damage in this struggle. Then there is where the buck stops after such colossal systematic failure. Some of the main protagonists – Permanent Secretary Leslie Evans, Judith Mackinnon – have remained in post despite their shortcomings and miscalculations becoming known and public (Evans leaving when her contract is up in 2022). There have been no resignations from the civil service and SNP and no sackings.

And there is also the issue of how we appropriately undertake allegations of sexual misconduct particularly by powerful men who can intimidate those who work for them. Sandy Brindley of Rape Crisis Scotland says: ‘There is no doubt it has set the public conversation about sexual harassment back. It has promoted so many myths about sexual crime and what a not guilty or a not proven verdict means.’

Then there are the implications for the cultures and processes of the Scottish Parliament, Scottish Government, and SNP. Holyrood, its committee system and the inquiry undertaken, along with the actions of the Corporate Body of the Parliament, were all caught short in this and not up to it. There was the distortive effects of hyper-partisanship, staggering incompetence, and overall there was the humiliation of the Parliament. Frankly, some MSPs were not up to the task of engaging with such controversial issues – across the political spectrum and parties.

The Scottish Government at its most senior levels is not as smart as it believes it is. It tried to embrace the #MeToo movement but remains partly stuck in some long-lost past where being openly dismissive and disbelieving women’s complainants of sexual misconduct is the norm.

Lessons have supposedly been learnt by the Scottish Government, but isn’t that evasive set of words the usually mealy-mouthed words used by institutions to avoid accountability today? Government, Parliament, SNP – all failed and are institutions at their very top with problematic, dysfunctional cultures. Are any of them better now after the fallout and recriminations – or is it more likely they have regressed and are less likely to lead, be bold, listen and respect complainants on such a subject, and hold powerful men to account?

As Clegg and Andrews reflect on this sad state of Scottish life they draw particular attention to the health of the mainstream media. They do not find it impressive – hollowed out, male-dominated, ultra-partisan – and often missing the real story for defining every political story through a partisan lens. BBC Scotland they rightly point out had a lack of ambition and imagination – with the BBC not breaking any of this story and consistently being behind the curve; and that is without mentioning the dreadful Kirsty Wark programme.

Alongside this is the fetid world of the uber-bloggers, conspiracy theorists and those spreading disinformation who had walk-on roles in this drama. Many believe they spoke truth to power, stood up for justice and against the persecution of Salmond, but in reality they lost any judgement they had through ultra-partisanship. Part of the blogosphere got lost in a cesspit of sexism and misogyny, the authors writing: ‘the women who dared to speak up have been ignored, vilified and abandoned.’

Moreover, this episode throws up challenging questions for the SNP and the future of independence. As one senior figure who worked with Salmond and Sturgeon reflected: ‘Do I have questions that I ask myself over whether I’m blameless or not? Of course I do. These are my friends. But set that aside – the bullying and the horrible human being that he was – why did we tolerate it? Because of the prize’ – meaning independence.

This is a necessary book about a turbulent period in Scottish politics, and Clegg and Andrews have done the subject and its numerous issues justice, treating it seriously and with respect. They have done the background work, undertaken numerous interviews, and tell the story straight, keeping the polemic to a minimum.

Some independence supporters will want to dismiss this account and pose it as a hatchet job on Salmond the man and his supporters, but it is nothing of the kind. Many will want to not read it, some through fear that their prejudices will be challenged, others because they will find the whole Shakespearean tragedy too upsetting: the latter is understandable, the former, an uncomfortable evasion of inconvenient truths.

For anyone who thinks Salmond has been absolved by being found not guilty in a court of law Clegg and Andrews write that ‘the behaviour admitted to by Salmond should not be excused just because he was acquitted’. The words of one of the women who worked closely with Salmond and was a complainant should make us all pause: ‘More than anything, working for the FM was like being in an abusive relationship. When he was being cruel, he made you feel like you deserved it. But at times he was very caring and great fun to be around, and it was these times that you began to live for …’

Ultimately, this book asks brave questions which all the main protagonists would prefer not to discuss that go beyond the Salmond-Sturgeon power play. Namely, what do we do when men in power consistently behave inappropriately? What do organisations do (in terms of action and redress) when this happens – and specifically organisations that believe they are progressive but aren’t really? And how can we be comfortable in a political culture where there is such rampant sexism and misogyny about the sexual behaviour of men – some of which comes from the Scotland of the dark ages and does not exactly equate with ideas of a forward-thinking country?

The book portrays a culture of government and party created by two protagonists who have grown up together over the past 20-30 years and whose professional and personal lives were completely intertwined with little boundaries. This became how the SNP governed and how the civil service worked under them. As the authors reflected: ‘Civil servants … should not be carrying out political projects or be involved in late-night drinking sessions in hotels and bedrooms with the First Minister.’ That was the normal working environment of Salmond, and while gone under Sturgeon, the wider culture of blurred party and state remains unchallenged.

One thread implicit in Break-Up is the damaging consequences of this saga for the SNP and the independence movement effectively dominated by a court politics and court party: a form of atrophied, manipulated democracy that Scotland is familiar with throughout its history. Independence is meant to be at its best about accountability, democracy and better government, and sadly none of these qualities were on evidence over the course of this tragedy. How we get back to such fundamentals, demanding better of those in power, institutions, leading independence and contributing to public life, is a set of questions all of us have to reflect and act upon.