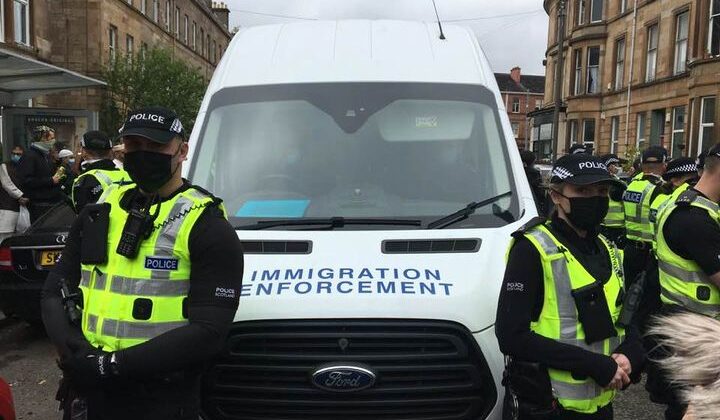 The campaign of the next Scottish indyref has already begun

The campaign of the next Scottish indyref has already begun. The Scottish and British Governments both know this and all that is left to be decided is the timing, the immediate context and details. This could be the end game for the UK as we know it and the start of a new chapter for Scotland. That requires that people get serious and up their game.

If anyone thought the issue of the power of the British state was some distant, abstract issue they just have to look at the scenes in Kenmure Street, Pollokshields in Glasgow’s Southside on Thursday past. The UK Home Office headed up by Priti Patel attempted to forcibly deport two Sikh men and were prevented by citizens of the area, myself included. Such is the right-wing racism and xenophobia of a Home Office which under successive Tory and Labour Governments has shamelessly played to the most base instincts and sentiments.

The next indyref will see very different Yes and No campaigns compared to 2014, with Yes starting out less the underdog and No fighting a more bitter, brutal campaign than the “Project Fear” of last time because it knows it can lose. Nothing can be taken for granted by Yes, but the fundamentals will matter including tone, processes and the nature of the offer of independence.

To aid this, the nature and structure of the campaign has to be different. The official campaign will be shorter than last time, but we are already in the long shadow campaign. Yes has to be less like 2014 and more like 1997. This means learning from the limits of Yes Scotland which was less of a genuine cross-party organisation and more like the Scotland Forward cross-party body created in 1997 which brought together Labour, Lib Dems and SNP and those of no party.

Yes Scotland was not a very independent body in 2014 – restricted in how it worked operationally and strategically; in the nature of its remit, and how it worked with the SNP, Greens and others. Creating authentic cross-party campaigns like in 1997 takes time and effort, in building trust and relationships behind the scenes. That work in 1997 began even before the election with a series of discussions ensuring that Labour and SNP formally would be involved and by what process. Next time the Yes campaign will not have official Labour backing but could have prominent Labour, trade union and Lib Dem figures at its heart.

Following on from this is the nature of the tone and pitch of the campaign and how it listens to those voters who are not yet convinced – and who should never just be entirely dismissed as “unionists”. As the pro-independence campaigner ‘Southsidegrrrl’ so pithily put it: “There is no such thing as No voters, only people who voted No.”

The biggest barriers in 2014 were the inability of Yes to acknowledge risk and any downsides, the economic offer, and the Salmond factor. The first two remain in play to the same scale with the first critical. Independence has to be honest about understanding risk in a modern society, who manages it and in whose interests: Scottish or Westminster politicians and institutions.

Economics and the power of figures

The economic and fiscal dimensions of independence have to be addressed. Pro-union voices understandably make much of the estimated figure of £1,941 higher public spending per head in Scotland compared to the UK average – assuming that this along with the details of independence give them a slam dunk case.

A friend who voted No in 2014 and is now Yes said of the infamous Brexit bus: “Yes needs to have the equivalent of the £350 million on the red bus figure.” This is true. Yes needs simple soundbite figures on the damage of staying in the union. There are three areas where we need costings. First, the ten years of Tory austerity pre-COVID; second, the cost of Boris Johnson’s hard Brexit; and third, the cost of the UK Government’s mismanagement of COVID producing the biggest collapse of any economy in the Western world. All of these can be costed on a per head annual figure and rolled into one totemic figure which estimates the cost to Scotland of remaining in the union.

As important is the process of how the White Paper on independence emerges and is created. Last time the 2013 White Paper just appeared as if from a magician’s hat – or more accurately from a room of civil servants with no prior discussion. It was a product of two mistakes. First, it lacked a sense of wider ownership and connection with a large part of Yes, with its contents just sprung on people as if out of nowhere.

Second, whereas the Yes side last time waited for the White Paper in terms of its offer, the No side instead of producing one ‘Big Bang’ produced a series of Treasury papers – which in the latter stages ran at one per month – critiquing various aspects of independence. This gave them a running set of stories and hits. This is an approach independence should consider next time with a series of mini-White Papers emerging from a wide-ranging series of discussions and consultations which could start later this year.

There is the question of the question(s) in the actual referendum and whether there are more appropriate ways of framing the debate – that can achieve more consensus and dial down on the division. This week pollsters YouGov drew from the example of the two-part question of 1997 on creating a Scottish Parliament with tax raising powers.

They posed a new two parter asking first: “Do you want to change the powers of self-government in Scotland?” and second: “If there is to be change which would you prefer?”: “independence” or “increased powers for the Scottish Parliament’. They found on the first a 67:33 split in favour of a more powerful Parliament, and on the second 54:46 against independence and for greater self-government (with don’t knows removed). This is at least worthy of wider debate questioning the widespread assumption from Yes that 2014 is just repeated in terms of the wording of the question.

Movement on the Pro-Union Side

Another big dimension over the coming period will be deliberate lovebombing of Scotland, throwing more money and Union Jacks on buildings, and the prospect from some of demonising Scotland. There is already a muscular no-nonsense unionism out there which wants to be tough and forego compromise. It can be seen in numerous right-wing circles such as the Daily Telegraph and Spectator.

The Spectator this week carried pieces by editor Fraser Nelson and neo-con Douglas Murray. Nelson believes that the story of Britain during COVID can be spun positive arguing: “When trouble strikes, there’s power in a union”; Murray invented an evil, wicked Scottish nationalism: “calculatedly divisive, fantastical, entirely reliant on stirring up hatred” out to “destroy a union they have no right to destroy.”

Elsewhere there are voices of more moderate unionism such as former Tory leader William Hague who argue that the devil is in the detail and there can be no indyref until every aspect is answered: “The position of pro-union parties should be that no referendum can be held unless the people of Scotland are allowed to see what independence is intended to mean” – and in particular on the currency, borders, finances and EU membership – which is surely up to Scots.

Talking of former leaders there is always Gordon Brown – believing as he does on every issue that more of his influence is the key to the issue, a view not shared by most of his Labour colleagues. This week he has been promoting a UK-wide constitutional inquiry and getting short shift from Boris Johnson.

Independence is a live issue and Yes has to learn from 2014: the good and the bad

Let us be clear. Whatever the current UK Government’s stance, they are engaged in a holding operation playing for time trying to say “now is not the time” and give an impression of emollience, while attempting for to dance round the question of whether the Scottish Government has a mandate to hold an indyref.

The late Nigel Smith was the organiser of the 1997 devolution referendum campaign and set up the body which brought SNP, Labour and Lib Dems together to make the case for the Parliament. He was anti-independence in 2014, but in early 2020 just before he died he recognised that the issue was not settled, telling me: “This is not a settled issue, but rather a live one which has to be concluded one way or another by at some point having another independence referendum.”

As someone who was an authority on referendums, he also told me at the time that Yes had to avoid hubris next time, believing its own hype and that it was automatically going to win. Since 2014 there has been an absence of heavy lifting in terms of rethinking independence, its offer and how it is presented, and understanding how it lost in 2014. This is not to say there has not been some exemplary work by the likes of Voices for Scotland on campaigning and messaging, it has just been nowhere enough. Smith put it bluntly: “There is a lack of understanding and analysis of 2014 by the SNP. If they don’t fully know why they lost, how do they make a new case?” It is that simple: understanding electoral defeat is a key to catharsis and renewal and it has been until now mostly missing.

Scottish independentistas have to avoid arrogance and self-certainty. Scottish nationalism and the SNP on its own will not be enough to win any referendum. They don’t have the range of appeal or votes. It will also need to draw ecumenically and genuinely from Scotland’s other political traditions and this is a strength not a weakness. It will have to draw from Labour and the trade union movement, from the social democratic and communitarian traditions which have so defined our political values and ideas, from radical leftists, Greens, feminists, liberals and those who simply believe in democracy and Scotland’s right to choose.

Remember the scenes in Kenmure Street, Pollokshields and the brutal face of the UK Home Office – only one week after our election and in Glasgow Southside, the First Minister’s constituency. If anyone ever dares tell you that independence is somehow irrelevant to the everyday issues and challenges our country faces the victory for protesters and humanity in Kenmure Street provides another example of why this is about the most fundamental issues we face as a society: who makes our rules, in whose interests, and how are they accountable?