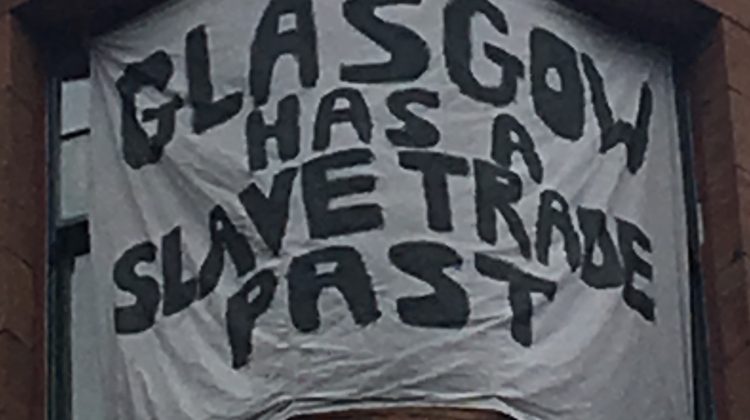 Black lives matter has become an international issue with street protests, rallies and gatherings across the globe. People have been mobilising, getting animated and becoming visible as they emerge from the shadows of lockdown. In Scotland and the UK home-made slogans and painted posters have appeared tied to railings and hanging from windows, while in Bristol the statue of slave owner Edward Colston was toppled by a crowd and thrown into the harbour.

Debates have begun about the racism, prejudice and discrimination that BAME communities face in the UK. Connected to this, are discussions about the legacy of slavery, Empire and imperialism – and whether any real progress has been made towards racial equality since the 1960s; an issue which haunts much of the USA.

The official mantra of UK Government is that this is a serious issue. UK PM Boris Johnson said so last week stating that ‘Racism has no place in our society’, choosing to forget his own insensitive contributions to this debate, and the many unhelpful remarks by his ministers, which don’t exactly aid progress.

Public Health England published a detailed report last week on BAME communities and COVID-19 which showed the disproportionate degree to which they had been hit by the virus. Any impact that this might have had was undercut by claims of censorship and the lack of a single recommendation in the publication.

Across the UK the experience of BAME individuals and communities paints a difficult picture with black Africans, West Indians, Indians and Pakistanis, Muslims, and those from the Middle East and Far East having worse and negative experiences across a range of measures than the white population. For example Pakistani, black Caribbean and black African families have twice the rate of infant mortality of white people; black women die in childbirth at five times the rate of white women; and black men and women have lower life expectancy than men and women from white and other ethnic groups.

Similarly, the criminal justice system disproportionately targets, penalises and punishes BAME individuals whether through stop and search, being fined for breaking lockdown rules, or when they come before courts – and in terms of the prison population. Although BAME people make up 14% of the population of England and Wales, they constitute 25% of those incarcerated.

There is the ongoing moral stain of Windrush and the ‘hostile environment’ – championed by Theresa May as Home Secretary – for which the only Tory defence seems to be that Labour came up with the terminology first when in office. Since this scandal was fully revealed, the Home Office has been slow to compensate British citizens illegally deported or prevented from returning to this country, with only a tiny number of people being recompensed for their suffering and distress.

There is the scandalous UK Government policy with the official title ‘No Recourse to Public Funds’ (NRPF). This inhumane policy has the express aim of denying up to two million people living in the UK the right to claim benefits or even right of appeal. It deliberately targets immigrants and asylum seekers while also affecting EU citizens living in the UK who have ‘pre-settled status’: the first part recently decreed a breach of the European Convention on Human Rights. Boris Johnson recently said before the Commons Liaison Committee that he did not know this was the consequences of a policy with such a stark name, trying to dismiss it as a ‘term of art’– which is damning and all too believable.

As well as the above, the characteristics of UK elites – whether political classes, corporate capitalism, legal and media establishments – all point to a society which has made great play about its diversity and inclusion, but in the intersection of race, class and privilege has not made the progress it likes to think it has. And all of this underlines the limits of middle class liberalism, particularly in the professions and elites.

Scotland likes to think it is different but across many areas of life, whether education, health and criminal justice, the experience of BAME people here point to the same outcomes that arise from systematic discrimination. For example, health inequalities in Scotland show higher rates of coronary artery disease and diabetes in South Asians, low uptake of breast and bowel cancer screening by many in BAME communities, disparate patterns of psychiatric hospitalisation by some ethnic groups in Scotland, and the late diagnosis of HIV and other complex conditions.

There are high profile injustices such as the death of Sheku Bayoh in Kirkcaldy in 2015 in police custody while he was being ‘restrained’ by nine officers armed with batons, CS spray and pepper spray. No officers were charged and four years on a public inquiry was announced which we are still waiting to conclude.

Meanwhile, many of the elites of Scottish public life are almost completely white with scant BAME representation across a range of sectors including business, legal and political. The BBC’s Philip Sim said last week in relation to twenty-one years of devolved government in Scotland that ‘Out of 306 MSPs elected in the history of the modern Scottish Parliament, there have been as many from one white family – the Ewings – as there have been from BAME backgrounds’: in both cases four. And the first and second Scottish Parliaments were all-white – so much for our much vaunted all-inclusive ‘new politics’ with such exclusion passing uncommented upon in 1999 and 2003.

This deliberate exclusion defines what is debated, the variety of opinions and experiences considered, and excludes representation. As the late Neil Davidson and Satnam Virdee wrote in the introduction to ‘No Problem Here’ last year: ‘Over many decades, this silence has come to be interpreted as an indication of its absence by much of the Scottish elite, including its political parties, helping to consolidate a now powerful myth that there is ‘no problem here’ ….’

Such sentiment informs the liberal complacency and self-congratulation which can still be found in too many places. Step forward as an example the prominent commentator Iain Macwhirter writing in ‘The Herald on Sunday’ last weekend. In his take on Scotland and racism, he signed off by concluding: ‘We can bend the knee if we want out of respect for the victims of police brutality, but we can also hold our heads up. Glasgow is not Minneapolis.’ This hardly seems a cause for celebration.

It is germane that Macwhirter reached his judgement about Scotland without recourse to referencing a single BAME voice. The previous week he criticised the well-known writer Reno Eddo-Lodge promoting their well-received book ‘Why I’m no longer talking to white people about race’, declaring of its title ‘When racism became respectable’. This is not enlightened liberalism or showing sensitivity or solidarity.

Putting this into a wider context, much of ‘liberal Scotland’ has historically a bad record on racism and other forms of discrimination and prejudice. This is a country which as recently as 1979 elected a single woman MP; where homophobia and anti-Irish, anti-Catholic prejudice were once so rife and systematic within living memory that across large parts of what was called ‘respectable society’ these were no-go areas conversationally. This silencing masked and reinforced deep prejudices and systems of social control, dominance and discrimination which paradoxically now they have weakened we are still not meant to talk about.

Scotland and Britain still bear the legacy and complicity in Empire, such that it affects Westminster politicians across the political spectrum – with Gordon Brown once remarking that ‘The days of Britain having to apologise for its colonial history are over.’

Many conservatives and traditionalists often comment now, when talking about Empire – after stating that it was not all bad – that the UK was the first country to abolish slavery. The undercurrent here is Empire as a ‘civilising project’. But the UK was not first as Haiti moved to do so in 1804 – resulting from the Haitian Revolution which was a successful insurrection and liberation by slaves from French colonial rule that resulted in independence and the abolition of slavery.

Scotland cannot escape from its role in Empire. Geoff Palmer wrote this weekend that there is silence and omission when it comes to this part of our history, saying ‘I believe that, in some quarters, ‘false national pride’ has been responsible for this omission. There is the misguided belief that the Scottish people need protection from their own history.’ And as American academic Tommy Curry from the University of Edinburgh put it: ‘Scotland remains very much in denial about its racist heritage and colonial legacy.’

This misrepresentation of our history aids no one, but the forces of power and privilege who gained from Empire, exploitation and slavery are, in many cases, still the same forces in powerful positions of society. This is not just about statues, including the rights and wrongs of the statue of Henry Dundas – slave owner and opposer of abolition who managed to delay reform for fifteen years – in central Edinburgh, with the council spending two years trying to agree the form of words on a plaque which got nowhere until the present climate spurred the council into belated action.

This is about centuries of systems of exploitation, brutality and dominance which once relied upon formal Empire and slavery, and now require slightly less brutal systems of dehumanisation. Scotland needs to come to terms with this, our history, who we are and what we did – as indeed does the entire capitalist world.

In the process, we might find that it allows us to be more honest about what our actions, what we were involved in, and what we want to do in the future. Pulling down a few statues, putting up a few plaques and renaming some of Glasgow’s streets might help; a UK Museum of Empire and Imperialism would be positive but this is about much more. It is about understanding the role that Scottish people played, the real historical nature of Britain and how it gained its power and wealth.

That will be an uncomfortable discussion but it is much needed and it will require more than the complacent liberalism and self-serving evasion which has characterised too much of discussion in Scotland. The legacy of Empire, imperialism and slavery, imbues still to a tragic degree modern Britain and Scotland and has to be taken on if we are ever to make a truly multi-racial society which banishes the stain of racism and racial discrimination.