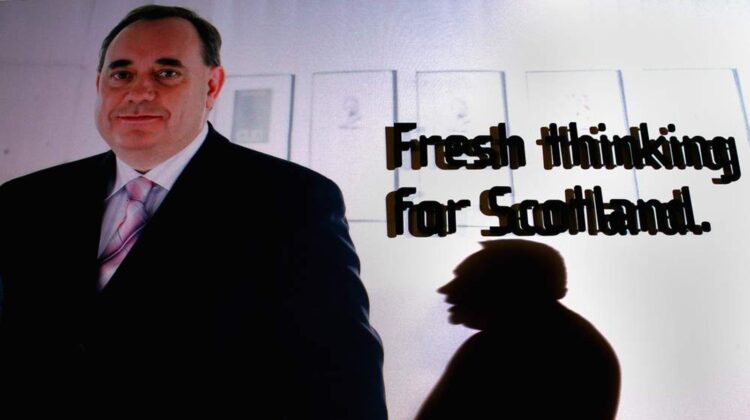 The return of Alex Salmond, Alba and whether it helps independence

That was a week that was. From the Hamilton inquiry clearing the First Minister to a vote of no confidence; to Alex Salmond taking the Scottish Government to court, topped off just before the weekend by Salmond launching his very own personal political force – the Alba Party.

The official version spun by Salmond about Alba – or ‘the Ecksit party’ as some wit dubbed it – is that it is all about independence and achieving a ‘supermajority’ in the Scottish Parliament in the forthcoming elections. He has even positioned his venture as vote SNP constituency vote, vote Alba regional vote, which all sounds very ecumenical.

Salmond is trying to reclaim his reputation as a big beast and player, rising above the personality politics and vendettas of recent years and days, and instead laying claim to represent only the best of the cause he believes in. He is even in his pronouncements prepared to say he will back Nicola Sturgeon as First Minister.

Some people claim to believe the pronouncements of Salmond above. None of it bears even cursory examination. For one there is no such thing as a ‘supermajority’ in the Scottish Parliament which makes an indyref or independence more likely. Social media voices can point to the Scotland Act 2016 Section 11 and its talk of a ‘supermajority’ of two-thirds (86) of MSPs, but that is purely in terms of devolved areas such as making changes in the electoral system.

Take the claims and aspiration of an independence supermajority at face value. There are three plausible independence majorities in the Scottish Parliament:

The first two are now less likely because of the intervention of Salmond; and the third, while just possible, has to be seen as inherently unstable and unlikely to be long-lasting or to bring about the change that Salmond and his supporters claim.

Why the Salmond party hurts independence

There are many reasons why Salmond’s enterprise will not aid independence. First, Salmond is not a very popular politician. He has, according to YouGov in March, favourable support of 14% and negative support of 77%: a net minus 63 – significantly more unpopular even than Boris Johnson in Scotland. Not only that, the group that Salmond is now most popular with are Tory voters (18%) rather than SNP voters (15%) – obviously because he is causing difficulties for Sturgeon and the SNP; there is also a significant difference between men (17%) and women (12%) which is hardly surprising.

Second, Salmond’s intervention is not really about independence, except his independence of action. This is personality politics, vendetta politics, the culture and pursuit of revenge. And in all this, it has little chance of aiding independence, let alone better politics, democracy and governance in this country.

Third, while it is possible that Salmond himself could get elected on the list – given name recognition and that he has been a MP/MSP before in the North East – the whole purpose of Alba is to ‘game’ the electoral system. The argument goes: one million wasted SNP votes on the list produced a mere four MSPs last time round.

This is success going to people’s heads – with the idea of a pro-indy party ‘gaming’ the list system having been about for several years. The SNP won 953,587 votes on the list and four MSPs in 2016: as they won 59 out of 73 FPTP seats – which the point of the regional list is to be a corrective to and make the overall result more proportional.

Independence supporters who want to play the system should take note that Labour were once here long before they were. In the first Scottish elections of 1999 Labour won 53 out of 73 FPTP seats and, with 786,818 votes on the list only three seats. This was a political shockwave to some of the Labour dinosaurs used to eternal party dominance and rule, and they wanted things back to how they once were. After the 2003 election produced a similar result for Labour, Ian Davidson, then Labour MP for Govan, proposed that the Co-operative Party run as an independent force on the list to win representation in its own right and then align with Labour in Parliament – hence busting the proportional system. Fortunately wiser heads in Labour prevailed.

Fourth, all of these claims detract and diminish the core appeal of independence. This is meant to be noble, aspiring, outward looking, inclusive, and – above all, progressive, democratic and moral; embodying these qualities in contradistinction to the grubby, corrupt and unreformed Westminster system. One does not need to invoke the Stalinist trap of ‘the end justifies the means’ to note the false logic and thinking here.

Fifth, something potentially more damaging is going on. This is the assumption in places that independence has already won – meaning that the merits of the case are now so obvious and the direction of travel so clear that the future has already been in a fundamental sense decided.

This leads to Salmond supporters and others assuming that independence support can just be taken as a given and in a sense for granted, and that the main challenges coming up are claiming and dividing up support, giving it leadership, carving out their own constituency in it, and interpreting the failure of others to act on all of this.

This means that the continual postponement of independence – either in the form of an indyref or an actual independent country – can be used as a stick to bash opponents who are meant to be on the same side. One of the most conspicuous failures to uber-independence supporters in recent years has been that of Sturgeon and the SNP leadership. They have in this framing of Scotland failed because they don’t have an obvious strategy, have no ‘Plan B’ if the UK Government continues to stonewall, or worse, don’t really believe in it anymore because they are comfortable in office.

It is worth pondering in Scotland that Alex Salmond, George Galloway and Tommy Sheridan are all currently being paid by the Putin propaganda channels RT (Russia Today) and Sputnik. These macho men all have a sense of swagger and belief in their own importance, with Galloway tweeting on the announcement of Salmond on Friday: ‘So it’s me and Alex Salmond in the ring. Heavyweights. Him for separatism, me for the Union. Seconds away …’

This is about Russian state disinformation, dark ops and spreading confusion in the body politic. And doing so by aiding voices which offer cover to the Russian state and its actions from Salisbury to Syria, and the undermining the geo-political interests of the West. This is not a good politics irrespective of your views on independence, and anyone interested in democracy should be questioning the involvement of these people with Kremlin-backed platforms.

Is Salmond’s project radical or reactionary?

There is a gendered, generational politics at play in the Salmond venture. It is male, masculinist, even misogynist. On the day of Alba’s launch, Salmond was asked several times if he had any words of apology for the women complainants who had to endure so much in the Scottish Government’s flawed judicial review and court case, and he could offer nothing in the way of apology, contrition or remorse. All he offered was having been vindicated through ‘two court cases, two judges, one jury, and three inquiries’ which avoids any responsibility, let alone showing empathy and reflection.

This is the politics of male entitlement. It is a terrible stance, indefensible and unethical, but is also bad for independence. The growth in support for independence post-2014 has happened disproportionately among women and in particular younger women, and Salmond’s message is not exactly reassuring them that sexual harassment policies and gender equality policies will be centrestage to his politics.

Added to this is the generational issue; of Alba supporters being drawn significantly, but not exclusively, from the well of older, white, angry men – Salmond, Kenny MacAskill, Craig Murray – who all seem to have issues with the diverse modern world. This is not a venture set to have an appeal with younger pro-independence voices in twenty-first century.

Even Salmond’s attempt to utilise divisions in the SNP and independence on the need for ‘safe single sex spaces’ and toilets (which is part of the trans debate) while appealing to some feminist campaigners, works better with older figures. That does not sit with the party’s first disaster – the much-hyped unveiling as a candidate of former champion boxer Alex Arthur, with his litany of racist and bigoted tweets being revealed in hours, forcing his public apology.

There have been attempts to frame the Salmond venture as more left-wing and working class than the SNP. First, it is not that difficult to find a position to the left of the current centrist SNP – but it has to have conviction. Second, claiming as George Kerevan did just before he announced that he was joining Alba that the party is more left-wing because of the traditional social democracy of prominent supporters, and citing Kenny MacAskill’s books on working class politics, is a bit thin; he then acknowledged that ‘Salmond himself was an early adopter of the Irish globalist, free trade, limited regulation model for Scotland’, contradicting his own analysis.

There is little prospect of Alba being seriously left-wing. It will though in a populist manner attempt to position itself to the left of the SNP on the Growth Commission’s economics, the currency question, public spending, and Trident. Basically on things that Salmond and his supporters can make grandstanding statements on to showcase their difference from the SNP.

Some will claim that the two forces that were once united – Sturgeon and Salmond, SNP and Alba – should embrace a non-aggression pact and the politics of solidarity, co-operation and mutual aid. This is a wish from another political universe. This is a politics of bitter division: on personalities, culture, politics and the kind of society people want to live in – and hence different kinds of independence: one which raises profound questions about the judgement of both Salmond and Sturgeon.

None of this aids Scottish democracy, politics and the well-being of the country. One year into a pandemic, bruised by a Brexit Scotland did not vote for, and ruled by a corrupt, self-serving political class headed by the serial liar Boris Johnson. Look at Scotland today. Are we really that much better? And if some people still think they are comfortable with the difference they should take a closer look.

The day that Salmond launched his enterprise was the 40th anniversary to the day that Roy Jenkins, David Owen, Shirley Williams and Bill Rodgers launched the Social Democratic Party (SDP) breakaway from Labour which divided the opposition and contributed to a decade of Thatcherite ascendancy.

The Alba venture may take away enough votes from the Greens to hurt their parliamentary representation, but by not winning the same number of seats for Alba then deprive the SNP and independence of an overall parliamentary majority. That would be a huge disappointment for some, and an outrage for others. But just like the SDP 40 years ago, the launching of Alba might have consequences that none of us can yet fully appreciate.