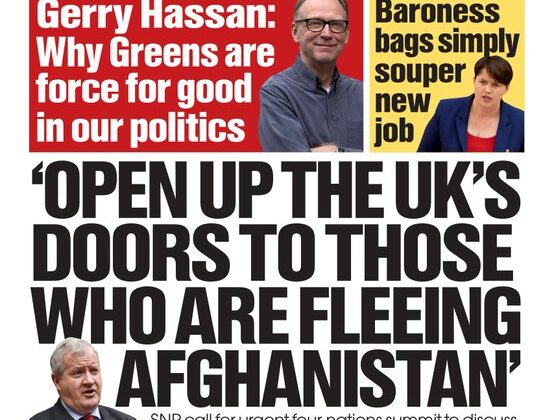 The Scottish Greens are a political force for good

The Scottish Greens matter. They are the fourth most popular political party in Scotland, won eight seats in the recent elections, and have been in the Scottish Parliament since its inception. Not only that they were an important part of the independence debate, while challenging all the other parties on the environmental and climate crisis.

In the Scottish Parliament, they have had influence, impact and brought about change. Since 2016 the SNP have governed without an overall majority (confirmed again in 2021) and the Greens have gained concessions for their support at critical votes – passing the annual budget for more monies for free school meals, public transport and public sector pay, and made the right call repealing such bad legislation as the Offensive Behaviour at Football Act.

The Greens are a permanent fixture in politics. They have contributed ideas and people which the traditional parties would not. They have pioneered co-leadership which no other party has. And they have brought into political activism a younger, idealistic, community focused range of voices.

Yet all of a sudden, as the SNP and Greens reach a conclusion on an agreement on government between the two parties – one which will involve Green ministers and policy commitments – part of the small world of Scottish political commentary has gone into apoplexy.

The past few weeks have seen a whole host of mainstream political commentators reach for the hyperbole. Last week Alex Massie in The Times called the Scottish Greens “an extremist party” and followed up by stating that: “Asking the Scottish Greens to come into government is a really bad joke.”

John Ferry in The Spectator called them “cranks”; Iain Macwhirter in The Herald laid into post-growth economics claiming it could only lead to “mass unemployment, poverty and more pollution.” Even more condemning Chris Deerin in the supposedly centre-left New Statesman called the Scottish Greens “radical, aggressive, socialist agitators”: their crimes being advocacy of such policies as a millionaire tax, publicly owned railways and rent controls.

Just to add to the merriment former Labour MP and MSP and current unelected Lord George Foulkes couldn’t get his head around why there are Green MSPs, calling their existence a product of “the eccentricities of the Holyrood election” – a system which elected Foulkes for one term to the Parliament.

This is not good enough. Green politics have influence the world over. In Germany the Greens poll at around 20% consistently, and may after the September elections be the main party of government with their candidate for Chancellor – Annalena Baerbock – leading that administration.

In New Zealand last year Jacinda Arden’s Labour won a landslide victory with 50% of the vote and an overall majority, with the Greens polling 7.9%. Labour then formed a “co-operation agreement” with the Greens which gave them ministers and a say in government. It looks rather like what may well emerge in Scotland – being short of a formal coalition – but don’t expect our insular commentariat to notice.

These critics are the same folk who regularly bemoan that Scotland has too much consensus, too little choice and not enough new ideas and radical thinking. But give them the most substantial political, intellectual, and global challenge to the status quo and they baulk and reach for cliché. They are nearly always men who are used to thinking of the world in conventional ways and do not like having it challenged.

The global climate crisis, along with the self-destructive nature of capitalism, are the two biggest issues facing the planet. The Greens stand on the right side of this debate. Similarly, they are against the inexorable march of corporate capitalism with its monopolies and insider class that defines politics and power across the globe – including here in Scotland.

This is not to say that a SNP-Green agreement is not without challenges. It will throw up questions for the cautious, centrist managerialism of Nicola Sturgeon including whether the SNP can be more open and generous. It will necessitate that the Greens get real about what they can and cannot influence and change, and do so without being “the SNP’s little helpers”. There is a culture clash between two very different types of party, styles of leadership and how they do politics, but that could be no bad thing for both.

Then there is the thorny problem of the Greens and some elements of the party described in Andy Wightman’s blog. Wightman was a Green MSP who resigned from the party in December 2020 and laid bare what he saw as a climate of intolerance, puritanism and obsession with identity politics and in particular trans rights. Wightman also stated that the party is run by “self-serving cliques and groupthink” – something which can happen to all small parties of the left as they becoming dominated by a select band of a narrow caste of people.

The Greens could say something distinctive on class and the poverty and inequality which scars Scotland. They could if they broke out of their predominantly middle-class world challenge this and the cosy consensus that excuses it. Just citing the need for a Universal Basic Income isn’t enough.

Similarly, the Greens have a golden opportunity to offer a different independence prospectus from the SNP, putting the economy, currency, social priorities, local democracy and the climate crisis at the centre. One which challenges neo-liberalism and the pale social democracy which dominates much of our politics.

The Scottish Greens are a success story of the past twenty years. Rather than listen to these out-of-touch voices they need to be even more sure of their convictions while doing their politics in a more inclusive manner. Rather than worry about being called “extremist” and “cranks” they should rather be bolder and more radical. Modern Scotland needs shaking up, and the complacencies and shortcomings that too many seem happy with challenged, and the Greens are well placed to do some of that shaking.