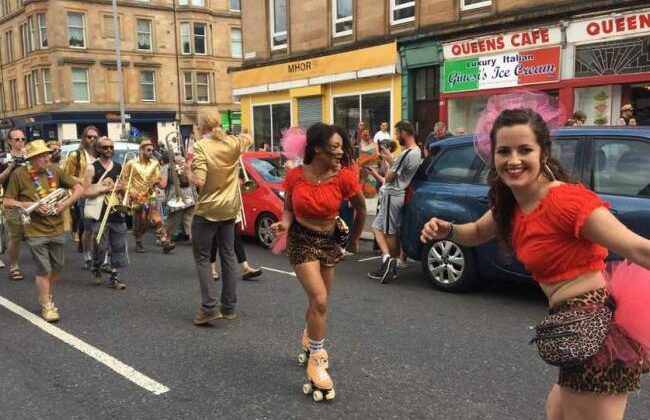 The world comes to Glasgow: Time to Think and Act Big

Glasgow can do big things. It has revelled in being an international host city – from the most memorable European Cup finals to European City of Culture 1990 and the 2014 Commonwealth Games.

The city’s sense of swagger, ambition and constant reinvention has sustained it through good times and bad, and aided it through difficult periods such as post-war deindustrialisation and the Thatcher era.

But alongside that, the city has been constantly battered by external forces and had huge change imposed on it whether by capitalist economics or government and experts – all of which has come at a cumulative cost.

This weekend the world in the form of COP26 arrives in Glasgow, a notably historic moment. This should be the occasion where Glaswegian’s pride and love of their city, its uniqueness, its contribution to the world and sense of recreating itself, comes to the fore and contributes to a global story about climate change action.

Yet COP26 opens against a backdrop of anxiety and worry – not just about the planet, but about Glasgow. Some of this is about the high stakes of COP26 and the state of global politics, but there is also a story nearer to home which needs untangling.

COP26 might be happening in Glasgow, but whose Glasgow? This is a UK Government show and they have made it clear that Nicola Sturgeon and the Scottish Government are not partners in this process, and that they wish to prevent the First Minister “grandstanding.” All this while a huge security barrier is erected around parts of the city cutting off neighbourhoods – at odds with the best traditions of the city.

Glasgow City Council is clearly constrained by multiple challenges – as all Scottish local authorities are – dealing with the fiscal straightjacket imposed by the Scottish Government which follows decades of centralisation by successive administrations at Holyrood and before Westminster.

Glasgow along with other councils has seen significant cuts to its funding in the past decade. Added to this are the complexities unique to the city that was once the citadel of Labour dominance in Scotland. The party lost control of the council in the last local elections in 2017 and was replaced by a SNP council led by Susan Aitken which governs as a minority administration with Green support.

It has been a bumpy ride. The SNP administration was inexperienced; Susan Aitken has made numerous controversial media comments that, as one insider told me, have “given the impression of being under attack”; there has been the women’s equal pay situation to deal with; a culture of council officers who had only ever worked with Labour; and a trade union attitude in parts of the GMB which seems to have relished at times causing trouble.

One SNP activist told me: “The terrible Scottish Government approach of cutting local council budgets, and giving them more statutory duties or ring-fenced funds for particular policy outcomes . . . turns local authorities into agents of delivery of Scottish Government policy rather than city leaders in their own right.”

Add to this the numerous challenges the city faces – the levels of poverty, inequality, exclusion, poor health and well-being, the city’s fiscal base, and need to act on climate change. Being Glasgow there are numerous ambitious grand designs from a welter of multi-agency partnerships which aim to address some of the big issues from climate change to the city centre, transport and the Clyde.

Glasgow is changing. The city centre has been hit by the attrition of the high street seen everywhere and rise of online shopping which were big factors pre-COVID-19. The latter has hit Glasgow hard for a city which marketed itself as the biggest shopping mecca outside London.

Many of Glasgow’s neighbourhoods – Dennistoun, Finnieston, Shawlands, Govanhill – have become buzzing, happening, destinations filled with independent shops, social enterprises and street culture. But this cool vibe and rich ecology is fragile being defined by precariat employment, and post-COVID will be vulnerable to economic stormclouds.

The physical fabric of the city is showing the wear and tear of its Victorian past – with its iconic tenements needing comprehensive renovation. Niall Murphy of Glasgow Heritage City Trust states: “We urgently need to address this by retrofitting our housing stock. However, though it will be intrusive, disruptive and expensive, it could lead to job creation and ultimately a fairer society if it reduces fuel poverty and helps mitigate the chaos of climate change.”

Transport and connectivity are a major issue in a city with the lowest car ownership in the UK while large parts of Glasgow are characterised and cut through by motorways. A Glasgow Connectivity Commission has come up with far-reaching plans, but requires agency, will and resources. “Transport is the biggest contributor to greenhouse gas emissions, in Scotland and in Glasgow – the majority is caused by private cars” observes Ellie Harrison, of Glasgow Community Energy: “Yet in Glasgow more than half of all households don’t have access to a car.”

The city is not aided by the continual disparaging it receives in the right-wing press. Papers such as the Daily Telegraph and Daily Mail are filled with dismissive scorn, even comparing the city to “sub-Saharan Africa.”

These are aided by a set of tropes that see the city in black and white terms. This was the perspective of Ian Jack recently in The Guardian writing that: “Away from its new riverside, Glasgow is often ruinous”; whilst writer Peter Geoghegan described this perspective as “the Manichean divide that characterises so much commentary about Glasgow. Either ‘no city like it’ or ‘no mean city’. The reality of living here is, inevitably, far more shaded.”

The missing Glasgow in Jack’s account draws from the best of the past and is present in the here and now. It can be seen in the community activism, social enterprises and campaigns to defend local services such as libraries and community centres from closures and futures uncertain.

There is a tension between this view of the city and official agencies: “I think greater value needs to be placed on the time and expertise of community organisations to enable genuine partnership working with the council” says community activist and artist Alex Wilde. We should “not to be made to feel grateful for the crumbs that are made available, not constantly asked to support consultations while being underfunded, not be led into taking over assets then left to fend for ourselves, and not patronised when we disagree.”

Jude Barber, Director of Collective Architecture, thinks agency and voice are critical to Glasgow’s future: “There must be open forums for frank and honest conversations – and awareness raising” she says “around very real challenges and barriers to enacting change around matters such as unequal distribution of land ownership/wealth, poverty, and stewardship.”

Glasgow has talked democracy for decades but practiced benign authoritarianism. “The democratic deficit that under pins the imbalance of power, decision making and the capture of the civic imagination of the city by corporate and capitalist ideologies is not part of the narrative in addressing a ‘sustainable’ or flourishing future” says Mark Langdon of SANE (Solidarity Against NeoLiberal Extremism).

“People are not disinterested in their futures and the life of the city,” he believes, “they are disillusioned, dispirited and often disengaged/alienated – too many of the processes such as consultation and ‘community planning’ which are meant to give people ‘influence’ are not fit for purpose.”

Glasgow’s current challenges have several time frames – historic and recent. There is the legacy of brutal industrialisation followed by deindustrialisation, both emblematic of epic, intimidating change – the lasting effect of which was catalogued in Sydney Checkland’s The Upas Tree published in 1976, arguably the most compelling account of the multiple changes the city has gone through.

The effect of the abolition of Strathclyde in 1996 which redistributed resources across the region and shifted monies from the suburbs around Glasgow into the city left a council with a fragile tax base trying to be the lead authority in a city-region without having the resources; twenty-five years later this remains a serious issue for the core and metropolitan area.

A long story across post-war Scotland has been the consistent institutional bias shown by the Scottish Office, civil servants, planners and administrative class. Post-1945 big change was afoot in town planning, redeveloping urban living and population movement. Glasgow was seen as a problem: too big, too dense in population, and needing to be cut down to size by a process of managed decline.

Chik Collins, an academic authority on Glasgow and currently Rector of the University of the Faroes states: “We need a proper reckoning with the legacy of the systematic mis-treatment of Glasgow by Edinburgh-based policy makers over many decades. Glasgow was forced into an accelerated industrial and population decline in the interests of what was perceived to be a ‘greater good’ of creating a new economy and society outside of Glasgow.”

Some of this was understandable, as dramatic change was needed to address the living conditions of thousands of Glaswegians, but what wasn’t was the condescending attitude towards the city and its people. Sadly, this has lasted into recent times – and the Scottish Parliament – with one civil servant telling me: “We have poured money into Glasgow and to what effect?”

The Scottish Parliament has shifted attention and power to Edinburgh to the detriment of Glasgow. Scotland’s biggest city was the centre of Labour Scotland and the party’s long reign, and the collapse of that era has left the city unsure of its role and purpose. This shift which began under the early Labour years of the Parliament has accelerated under the SNP.

Reinventing the role of Glasgow post-devolution is no small ask, and requires structural change, reversing centralisation and the diminishing of local government. This would necessitate looking at the creation of a powerful city-region, something no devolved administration has been willing to consider, taking on those entrenched anti-Glasgow attitudes which still exist.

Glasgow has a choice. It can either face its challenges and choices and attempt to address them, or continue on its present path, and face further decline. To avoid the latter it needs to think and do big – with the support of others including the Scottish Government – to understand and embrace fundamental change.

This would entail understanding that Glasgow is special and unique – Scotland’s first city in size and status, a powerhouse of economic wealth, growth and innovation, as well as a place of some of the worst poverty and ill-health in the developed world, with every gradation in-between.

Glasgow’s role and importance needs recognition, as does the unsustainability of the status quo. It needs to be treated as a one-off and not have to wait for Scottish-wide reform to local government, regeneration and city-regions. Glasgow’s present predicament arises from a host of factors, exasperated by the limitations of the present city council which makes bold, ambitious leadership impossible.

Let’s have a city we can walk around, where rubbish is properly collected, bins are not a running sore and embarrassment, and we can have an integrated transport system not just for two weeks for the elites – but its citizens all year round. We need to do the basics before we dare to think big.

Glasgow has shown it can embrace and do change. Yet this is not just a Glasgow matter, but one which affects Scotland. The city needs structural reform to facilitate powerful voices, civic leadership with ambition, and a sustainable, buoyant fiscal base. But that requires Scottish-wide debate and for Scotland’s political classes to accept that they want a dynamic Glasgow at the heart of a dynamic Scotland. We have to decide as a country whether we really want – to use a well-known phrase – “Let Glasgow Flourish.”

Photo: Govanhill International Carnival/taken by myself