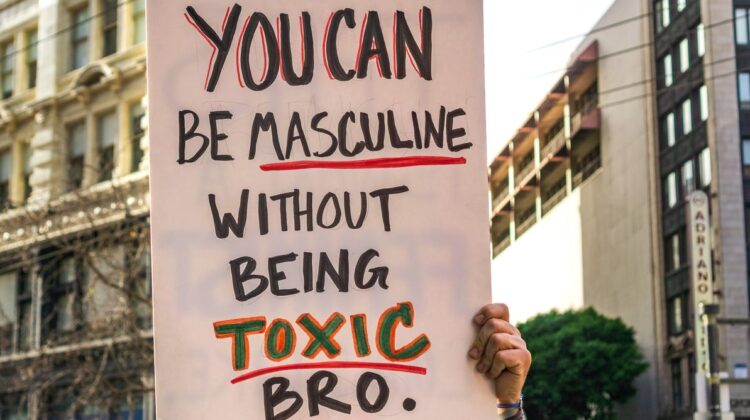 Trump and the Problem with Sexist Men and Masculinity

Today is the end of the Trump Presidency – four years of chaos, incompetence, hatred and prejudice, fuelled by his constant craving and need for attention and approval. But this is not just a story about one repulsive man in America; it is a global moment and warning.

One of the underlying factors in the personality of Trump is his expression of masculinity – boorish, abusive, intolerant, lacking any empathy of others, irresponsible and unreconstructed. He has believed all his adult life that he is accountable to no one, and can do whatever he likes with no consequences.

A mixture of factors produced Trump: kleptocratic capitalism, his wealthy and indulgent father, and the self-aggrandisement of plutocratic wealth; the narcissism of celebrity and reality TV culture; combined with the right-wing lurch of the US Republicans in recent decades towards demonising their opponents, playing fast and loose with democratic norms including voter suppression, and repeatedly using the racist card.

Trump is about gender and gender politics. His 2016 contest with Hillary Clinton brought this out in the open when he tried to explain away the offensive remarks he made about how he treated women that were caught on tape by dismissing them as ‘locker room talk’. Jackson Katz, who has written extensively on masculinity for decades, observes that Trump represents ‘the emotional and relational straightjacket of traditional forms of masculinity’ and that he is ‘someone with an incredibly limited and cartoonish understanding of what it means to be a man.’

All across the world we see the phenomenon of the myth of strong male leaders: Putin, Erdogan, Orban. All give voice to authoritarian populist politics, tarnish democratic processes and the rule of law, stigmatise minorities, and hanker back to an age of certainty and a golden era of national importance where the leader is seen as a symbol of masculine virility.

There are many differences between Trump and Boris Johnson. But there are commonalities. Both are serial liars. Both have regularly said things which used to be seen as unacceptable – including racist, sexist, homophobic comments. Both have played fast and loose with democratic norms, while posing as outsiders despite coming from deep within the worlds of privilege and the establishment. Yet Johnson is not a thug, a gangster and a mobster. And he has not invoked and encouraged violence and attempt to deny and overthrow a nationwide election.

Scotland long had a reputation, until recently, of combative macho politics. Pre-devolution there were very few examples of female politicians in national life; the likes of Winnie Ewing and Margo MacDonald were the exception in the 1960s and 1970s. As recently as 1979 Scotland elected one female MP out of 71: Dame Judith Hart for Labour. Since 1999 and the establishment of the Scottish Parliament there has been an air of self-congratulation that we have left those dark times in the past. There has been a belief that we have travelled far and become a more enlightened and inclusive country in the area of equality and retreat of outdated sexist attitudes.

The high octane energy of the independence debate gave permission in places to abusive, vituperative comments. This can be seen across the political spectrum but is found more frequently on the pro-independence side with prominent examples including the blogger Stuart Campbell who runs the ‘Wings over Scotland’ site and former UK diplomat Craig Murray – both of who have been involved in legal challenges due to their comments, the latter still active. This was an unattractive aspect of the independence debate in 2014 but has been left to fester since – unchecked and unchallenged by the SNP leadership – the exceptions being rare such as Stewart McDonald, MP for Glasgow South.

It is in this context that the ongoing Alex Salmond-Nicola Sturgeon saga has to be seen. This has entailed a Scottish Government investigation into Salmond after two complaints by women of inappropriate behaviour; Salmond taking the government he once led to court and winning; him being charged with fourteen counts of sexual assault and in March 2020 (after one charge being dropped) he was found not guilty. Since then Salmond has promised to unveil the conspiracy of forces which he believes connived to ruin him, suggesting that these involve the highest reaches of government, civil service and Sturgeon.

This has been simmering away for the last two and a half years and has entailed some of the most partisan pro-independent voices getting more outlandish and extreme in the allegations they have been making – doing so from a pro-Salmond perspective which takes aim at Sturgeon and the head of the civil service, Leslie Evans. Not only do they peddle extreme conspiracy theories that Sturgeon was out to destroy Salmond, they also muddy this up in gender politics and a belief that #MeToo has gone too far and exploit the faultlines in the SNP on trans rights.

Step forward last week Robin McAlpine of the Common Weal think tank in a column in he which declared that there had been a conspiracy by Sturgeon and her allies to destroy Salmond. He claimed that there has been ‘grooming of complainants’, mixing this up with a critique of the First Minister and her government; describing the Sturgeon administration as having ‘a messianic cult of impunity’, concluding in a controversy originally about Salmond’s behaviour calling on Sturgeon to resign as First Minister. This brought praise from Salmond supporters, but elsewhere was met with incredulity (with McAlpine stepping down as a result from his post).

Katie Gallogly-Swan, who worked with McAlpine, wrote of her experience of his sexism, saying he had asked her when she was 24: ‘have you ever been raped?’ and consistently diminished sexism, comparing it to his experience as a young man when he had ‘a hard time as a wean cos he had glasses, & that this & treatment of ginger people showed sexism was just grievance politics.’ Mandy Rhodes, editor of Holyrood magazine in a passionate piece about the Salmond-Sturgeon powerplay, observed that: ‘He blames her, she blames him. And what of the women? They are shockingly absent in this. If this was about the women, who is actually thinking about them?’ and accurately noted that what was also absent was any sense of accountability of those in high places for their actions as they engage in deflection and delay.

In Scotland, as elsewhere, those who peddle disinformation and stoke the fires of prejudice are nearly entirely men – and mainly white men. This global pattern – of entitlement, megaphone diplomacy and intolerance of others which diminishes and damages public life, discourse and the public sphere – is repeated again and again, begging the question how did we get so low in lacking mutual respect? Is this really the fault of social media or is that an amplifier of something darker and more serious? And what can we do to prevent things turning even more intolerant, abusive and even violent, as we have seen in recent weeks in the US?

We cannot stand idly by and let those with the most siren voices take centrestage, define and dominate debates and poison the well of public life. They will not be defeated by ignoring them, or calling for calm and restraint. They can only be exorcised by taking them on and challenging their disinformation and lies.

Taking on such forces when they are behaving badly brings us into the terrain of gender politics, for this is mostly men behaving badly and invoking all sorts of sexist, misogynist tropes, and demands that men do not remain silent and instead call them out. This perspective, developed by Jackson Katz and others over the years, is called ‘the bystander principle’ by which when inappropriate behaviour occurs many people have a propensity to turn away or remain silent, and that people have to be aided to do the opposite – and in this, men challenge sexist men.

We live in a complex world. In the past four or so decades we have lived through enormous changes in work, society, the economy, families and relationships. Some of this has been bewildering, even unsettling, with traditional role models of what it is to be a man and women becoming less fixed. This has meant that across Western societies, aided by changes in media and technology, conventional explanations of what is wrong in society have now become challenged by a host of simpler, accusatory explanations that have gained traction and constituencies due to this economic and social dislocation.

Pivotal in this is what it means to be a modern man in the 21st century in Scotland, the UK and globally. Not so long ago boys became men by rites of passage – apprenticeships, going to work, getting married xxx. Without these clear points in the path of socialisation and societal norms it has become much less clear about what it is to be an adult man and where the demarcation between boyhood and adulthood sits. Hence, life is filled with a host of men in their 30s and 40s who look and sound like adults, but in fact in much of their behaviour is little more than adult children, angry at the world, avoiding criticism, and often expressing this in the most illiberal, sexist, racist and homophobic ways while thinking they are enlightened liberals.

Trump and Johnson in public and private do not come across as fully functioning adults, but stuck in an earlier stage of development where they deny responsibility for their words and actions. This despite being in positions of authority as political leaders.

One problem in dealing with peddlers of hate, prejudice and disinformation is that many who do so do not think of themselves as ‘bad guys’ but as ‘good guys’ who are beyond reproach. This was one of the moral quagmires that Jeremy Corbyn and Corbynistas got into on allegations of anti-semitism – the ‘Jeremy is a good guy’ defence – and the same is true in some of the most fervent independence supporters.

Trump’s America is a warning to all of us. The vitriol and violence of the past four years did not begin when Trump emerged but have a long back story and won’t go away when he leaves the stage. But this is not just about America. Look around the world. In Scotland and the UK we have our own pumped-up versions of Trump and Trumpism, and people happy to play with hate to get attention and validation.

If we go on as we have been in recent times – not just in appeasement of hatred and prejudice – but in allowing a regressive form of masculinity to hold the rest of us to ransom while the economic, social and democratic values of our societies fragment and fray, the next demagogue in the US or elsewhere will not be as scattergun and disorganised as Trump has been. What we have witnessed over the past four years could have been a lot worse, and it could descend further unless we act, get serious and challenge the forces of hate.

Jackson Katz judges that because of power in society a special responsibility falls on men to speak out about men: ‘You don’t have to be perfect as a man to speak out on the issues of domestic and sexual violence and sexual harassment. Part of the process for men is to think about how have we contributed over the years, either through our silence or through our actions.’