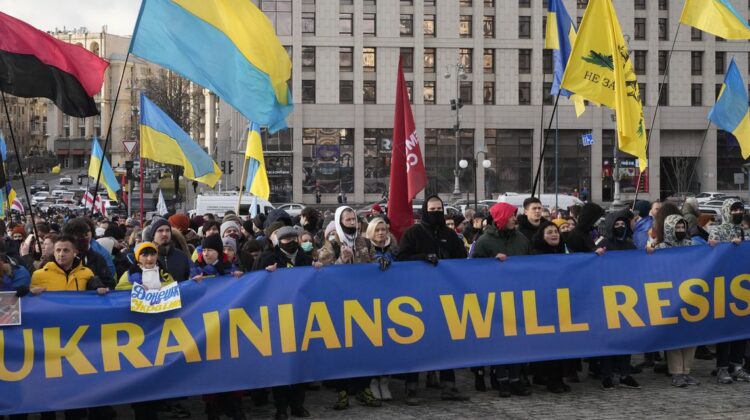 There is only one story at the moment – the Russia invasion of the Ukraine and how we respond to it.

This comes after years of Western misjudgement and appeasement of Putin and Russian aggression in Chechnya, Abkhazia and South Ossetia in Georgia in 2008, the annexation of Crimea and invasion of Donbass region of the Ukraine in 2014, leading to full-scale invasion last week.

How often do we have to learn the same lessons? The need to stand up to dictators and bullies; to oppose fascism; to not collude and connive with its platforms and propaganda; and to demonstrate solidarity with democracy, especially with a democracy under attack.

This is not ‘a conflict about ‘a far-off country, between people of whom we know nothing’ to quote Neville Chamberlain dismissive remarks about Czechoslovakia in 1938 before the sell-out of Munich. This is our European home; our common European home. Democracy is under attack and this is an assault on all of us.

Putin has to be stopped. There can be no compromise that allows Putin to claim victory or limit Ukrainian independence and its right to determine its own future. This might involve the long haul but unless he is stopped now Ukraine will be one in a long line of victims – with potentially the Baltic states of Estonia, Latvia and Lithuania next, once part of the Soviet Union (illegally occupied after the Nazi-Soviet pact of 1939) and now EU and NATO members.

There is the danger of Putin’s Russia not only longing after the superpower prestige of the Soviet era but being an imperial power in decline – something the British, French and even Americans should understand. As the West tightens sanctions on Russia, weakening its currency, Ben Judah of the Atlantic Council points out that this has echoes in UK imperial decline: ‘Forcing a nuclear power into a currency crisis to stop military adventurism is exactly what the US did to Britain in the Suez Crisis’ of 1956 forcing a humiliating British and French withdrawal.

The indefensible attitude of the UK Government towards Russia has played into Putin’s interests. The scandal of Tory Party finances includes one donor Lubov Chernukhin, wife of Putin’s former deputy finance minister who gave £1.9 million to the Tories: the biggest personal donor ever to a UK political party. This included £160,000 for tennis with David Cameron and Boris Johnson, and £135,000 for a night out with Theresa May.

Another problem is the UK Parliament Intelligence and Security Committee Russia report finished in 2018, delayed in publication until 2020 – the UK Government had not implemented any of its recommendations until last week. One day before the Russia invasion Boris Johnson told the Commons ‘I have seen no evidence of successful Russian intervention in UK politics’ – with the word ‘successful’ doing a lot of work.

The UK Government is as usual letting down people who need our help. There is no UK visa- free scheme for fleeing Ukrainians, and at the end of the weekend the UK Home Office were still making requests for £3,000 from applicants and details of their previous salaries. This after Afghan refugees were left stranded despite all the UK promises. Is this really how the UK wants to be seen around the world in such times of humanitarian disaster?

The invasion of Ukraine has implications for Scottish independence. It throws up big questions about a Scottish defence force, defence spending levels, and the intelligence and security needs of a Scottish state. This will require thinking seriously about the threats in the world, co-operation with rUK and tackling Russian state disinformation – as well as that of others – something upon which SNP MP Stewart McDonald has led by example.

This makes the case for Scottish independence as anchored in EU and NATO membership – institutions which would protect Scotland’s self-government, and of which Ukrainians understand the importance.

There has been a genuine debate about the role of NATO after the collapse of the Soviet Union, with some seeing it as having outlived its uses and its eastern expansion as a needless provocation to Russia. That debate is over and Putin has made the case for NATO as a defensive alliance and for the EU to have a coherent foreign policy.

Some in the independence camp have been happy to offer cover and legitimacy to Putin. These have included Alex Salmond’s broadcasting on Russian state-controlled RT (now temporarily suspended) and Tommy Sheridan’s involvement with Sputnik. A wider constituency questioned the role of the Russian state in the Salisbury poisonings and other activities.

Such actions have been an embarrassment to independence but are found across the political spectrum. The fringes of the left such as George Galloway, and an assortment of right-wing populists like Nigel Farage, Marine Le Pen, Silvio Berlusconi and Donald Trump, have all expressed their admiration of Putin. In parts of the left the logic runs that my enemy’s enemy is my friend, and because of their opposition to Western imperialism they are prepared to condone Putin and excuse Russian imperialism. That is a terrible logic.

Scottish independence up until 2014 assumed that Scotland could establish its own statehood in our relatively peaceful, prosperous corner of North-West Europe. It was not completely true geo-politically then, given the Atlantic coast of Scotland and the importance of the GIUK Gap (Greenland Iceland UK Gap), the straits which open out into the North Atlantic – which were crucial in World War Two and the first Cold War and could be again. Putin ‘annexed’ Crimea in 2014 and since then the world has been an even more dangerous place.

We have to stand with our Ukrainian friends and European allies, demand better of the UK Government on Russian interests and monies, and champion international solidarity and compassion for Ukrainian refugees fleeing Putin’s forces.

This means that the Scottish Government and independence will need to develop a very different vision compared to 2014. The world is entering a scarier era that requires us to embrace international co-operation, the need for Western security and alliances, and the importance of a consistent, coherent EU foreign policy.

The past few years have seen where Western weakness, vacillation and appeasement of Putin has got us. The UK Government has been central to these failures. The forces of Scottish independence have to stand with the forces of democracy and self-determination. There can be no equivocation or fudging of these fundamental principles. We are all Ukrainians now.