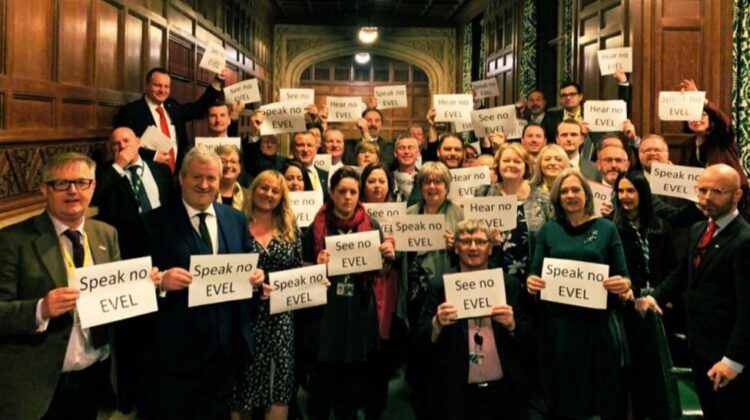 Westminster, the SNP and independence: How SNP MPs can stand up for Scotland’s right to decide

The recent Scottish Parliament elections of May 2021 are a mere three months old, yet for some people who grow easily impatient at the pace of our politics seem to have been already written off.

At the same time our politics and society face numerous challenges: COVID-19, the escalating chaos of Brexit, the daily incompetence of Boris Johnson and his Tory Government, the scale of Scotland’s drug deaths, and more. Yet, in parts of the independence movement there is only frustration, calls for instant action, and a belief that the SNP have grown soft in their years in power, and even soft on the issue of independence.

One area of public debate is the role of the Westminster SNP MPs – 48 strong when elected in December 2019 and now 45 strong after two deflections to the Alba Party – while Margaret Ferrier remains suspended from the parliamentary party.

Many now ask what good does the SNP do when in Westminster with a Boris Johnson Tory Government with an overall majority of 87 seats? Would not these politicians be better placed back in Scotland, visible, organising, campaigning and agitating? The National contributor Pat Kane observed last week: “Why, exactly, are SNP MPs still attending Westminster, if they’re completely ineffectual and utterly ignored? What good works could they be doing the entirety of their week in Scotland (e.g. building polices and movement for indy)?”

There are a couple of variants of this sentiment. The first is the full Westminster withdrawal option – harking back to Sinn Fein in 1918 – an abstentionist position the party still maintain in the present with their Northern Ireland contingent. The second is the more nuanced one of partial withdrawal – reassessing the time and commitment between Westminster and Scotland.

First, a Westminster full scale withdrawal is just not going to happen. The SNP is a parliamentary party through and through, and SNP MPs have sat continuously in the House of Commons since Winnie Ewing won Hamilton in 1967 – 54 years ago, followed by Donald Stewart winning the Western Isles in the 1970 UK election: the first time ever the SNP won a seat at a general election.

Second, the party does need to rethink its role and actions at Westminster, particularly in light of a Tory Government which has brazenly and shamelessly on an epic scale broken the law, treats Parliament and due process with open contempt, and is led by Boris Johnson: a serial liar with little to no moral compass.

This second position is the one advanced in a thoughtful contribution by former SNP MP George Kerevan in The National on Monday writing: “What is the best way to prevent SNP MPs going native? Is outright abstention the answer?”, meaning how to stop them becoming too comfortable in the clubland of Westminster, answering his own question thus: “No: I believe there are obvious advantages to having a forward base in enemy territory.”

This takes us to the need to use the House of Commons as a place of opposition and resistance as well as of drama and theatre, recognising the need to speak to and represent several different constituencies in differing ways with differing messages – and accepting that not all SNP voters see independence as the sole issue which shapes how they think of politics, and that this is even more true of the critical swing voters who will be key to the future prospects of independence.

In terms of substance, the Westminster SNP MPs are fully aware of this situation, live and breathe it on a near daily occurrence, and want to appear to be more active, vociferous and challenging of the orthodoxies of Westminster.

One possible course of action would be to challenge the UK Parliament on what it has already declared in relation to Scotland. Thus on 4 July 2018 the House of Commons unanimously agreed to a motion which stated support for ‘A Claim of Right’ and the sovereignty of the Scottish people; the Scottish Parliament having previously voted to support ‘A Claim or Right’ on 26 January 2012 – by a vote of 102 to 14.

Thus the SNP group of MPs could put down a parliamentary motion redeclaring support for ‘A Claim of Right’ and the principle of the sovereignty of the Scottish people, referencing the decision of the Commons in 2018 and Scottish Parliament in 2012.

Following this the group could submit a short parliamentary bill giving the Scottish Parliament the right to call an indyref. Given the UK Parliament should accept the first, the fact it is more than likely they will not accept the second would be a telling political moment.

Similarly when such a Scottish bill was slapped down the SNP MPs should not leave matters there. They could – as Labour ‘Red Clydesiders’ like James Maxton and John Wheatley did – continually put down parliamentary bills and motions on the principle of Scotland’s right to decide its own future, force Westminster to reject them and to explain why they are rejecting such a democratic principle. Kerevan recognises this commenting: “If Scotland sets itself against Scotland’s right to choose its own political destiny, then SNP MPs should be willing to disrupt the UK Parliament till that right is recognised.”

There are other areas the SNP group of MPs can show their effectiveness, ability to stand up and represent Scotland’s interests, and why for as long as there is a UK Parliament they should be there at Westminster.

It is also worth noting that independence is not the sole subject that the SNP is about, or that motivates SNP voters or indeed voters of other parties who the independence cause needs to win over. Huge issues of the day which affect Scotland are debated and decided at Westminster – from economic policy to welfare issues and such big concerns as Trident and nuclear weapons.

Westminster still matters to Scotland and any calls for the SNP group to withdraw permanently would send out the wrong signals. It would say that they were not prepared to dig in and resist Tory rule, and instead give in to the allure of gesture politics of symbolism over substance. Moreover, it would underplay the extent to which they could imaginatively, boldly and with determination, use the Palace of Westminster with all its pomp and procedure to oppose the Tories, stand up for Scotland and advance the cause of Scotland’s right to decide.