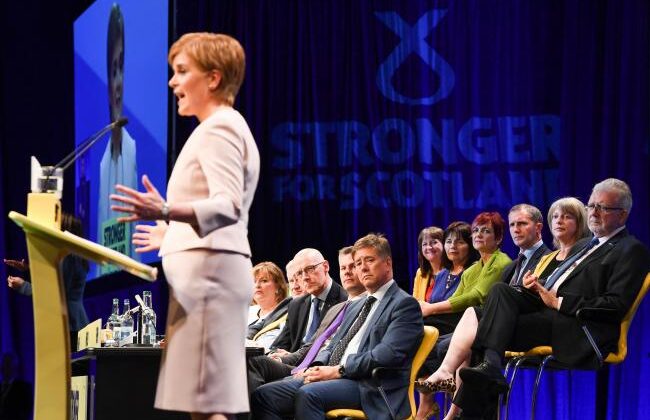 What is missing from Scottish politics, the SNP and independence and can we rectify it?

What are the main characteristics of Scottish politics? Fifteen years into SNP Government the party is still popular; the First Minister Nicola Sturgeon has ratings any incumbent could only dream of having. Yet underneath this, things don’t quite seem right.

There is a stillness across Scottish politics and public life. For a start there is no credible opposition to the SNP. The Tories under Douglas Ross just don’t cut it; while Labour under Anas Sarwar might have a bit more of a polished soundbite but are in a worse political place.

Nobody outside of the Holyrood media bubble thinks that these two leaders have anything original or relevant to say about anything. This is tragic given the challenges of our age in Scotland and beyond, and the long proud traditions of both parties. The lack of opposition and the dearth of ideas and not clearly standing for anything diminishes our political life and reduces the rationale of Tories and Labour to just being against the SNP and independence.

All of this produces a vacuum where there should be the clash of interest and ideas. It aids the SNP’s dominance in the short to medium term, but at the same time feeds their complacency and thinking that no one can challenge them – which is the conceit that all dominant parties eventually fall into to their own detriment.

The strange dominance of the SNP

The SNP’s strange state in office does need some explaining: so dominant, so firm in the view they are right, yet cautious and unsure. They have dominated the political landscape for 15 years – emphatically at Holyrood since 2011 and at Westminster in relation to Scotland since 2015. But the nature of that dominance and what it has achieved – beyond the 2014 indyref – isn’t very clear.

The record of the party is increasingly patchy and not that good. Even more damagingly it increasingly looks like the SNP do not actually know what they stand for beyond remaining in power which is eventually never enough.

The SNP’s social democratic credentials have been trumpeted for years but are embarrassingly thin. SNP social democracy has never been defined by anyone beyond meaningless platitudinous soundbites which are the equivalent of New Labour at its peak. No SNP leading figure has made any real contribution to the social democratic tradition, instead this rich tradition has been reduced to whatever a SNP Government decides to do (with echoes of Harold Wilson and Labour in office).

It does matter that the SNP explicitly embraced social democracy in the 1980s, just as it was in retreat and being hollowed out by Thatcherism and Reaganism, but the SNP’s social democracy has so little grasp of the philosophy that supposedly defines them that they barely if ever acknowledge this. Rather a Scottish triumphalist social democracy boasts that we are the one country in the world where everything is healthy on the centre-left.

The SNP are a centre-left party which has never argued for or progressed redistribution from the affluent to the less affluent. This has similarities to Labour in its devolution heyday when it cossetted power to itself and insider groups, while protecting and redistributing towards the comfortable middle classes. Dare one say it, but stripped of the constitutional question, the continuity between Labour and the SNP in office under devolution is stark and alarming and not widely enough understood.

Even by the SNP’s growing complacency their mess-up on pensions was amateur politics. To go off script as SNP Westminster leader Ian Blackford did suggesting that in an independent Scotland the UK Government would continue to pay pensions to those who had paid in to the UK exchequer is just laughable if it were not serious and a damning own goal. Not only that Finance minister Kate Forbes and Nicola Sturgeon subsequently backed this ridiculous line which came from Blackford freewheeling and misspeaking. All of this is a sign of the party losing its discipline and political touch, and has been a gift to political opponents.

Where is the different Scotland of independence?

Losing in electoral politics and contests, while regrettable if it happens to your party or cause, can have a positive, even therapeutic outcome. It can assist in your learning, growing, recognising the flaws in your offer, and critically understanding the world beyond the borders of your cause and supporters – in other words, the people you need to win over who have rejected you.

The SNP engaged in no proper post-mortem after independence lost in 2014 at any level – senior leadership, parliamentary groups or formal wider party. The rationale given at the time was that the party was on a roll – too busy and intoxicated with the 2015 UK election and pursuing ‘the 56’, followed by Scottish elections the year after and Brexit. It is a feeble argument, making the case that SNP politicians cannot multi-task – fighting elections while reflecting on why they lost the biggest exercise in democratic engagement in Scotland’s history. It is an abdication of leadership and probably the first serious strategic mistake of Nicola Sturgeon’s leadership.

The reason there was no independence post-mortem was more profound. The SNP leadership did not want to look too closely at the flawed offer of 2014 – on the currency, finances and public spending, the economic illiteracy, the North Sea oil price, or indeed the lack of democracy in the Yes offer (from how the White Paper emerged to Yes Scotland run to the Scottish Parliament uncritically presented as a paragon of democratic accountability up to the tasks of an independent Scotland). Far easier to just blame ‘the Vow’ (as the likes of former SNP leader Alex Salmond do).

There is a direct link from the absence of addressing why Yes lost in 2014 and the lack of work on a new independence offer – the terrain of which is there. It would not only embrace detail it would understand that independence involves strategic choices, some of which will be difficult, but that this is inherent to what independence is about. A more grown-up politics, maturing and taking responsibility, and understanding the gap between how we like to think of ourselves and where we actually are – and having some interest in closing that gap.

Not only that it would go beyond detail to embrace a different philosophy and feel of independence which accepted that there were risks, unknowns and threats in the nature of an independent Scotland. None of this has happened or is happening. It is as if Nicola Sturgeon’s leadership think that independence can now be embodied in an attitude and practice of being a decent human being and providing benign administration on some of the big shocks of the day such as Brexit and COVID-19.

Whatever the many flaws of Boris Johnson and Westminster they are not simply going to completely blow themselves up. Eventually Johnson will be replaced with someone a bit more competent and serious and even though Toryism’s underlying characteristics and problems will remain, it will feel a lot less acute and a continual insult to our intelligences.

Two points flow from this. Independence does not happen by default. It does not somehow become a popular majority because Westminster is a theatre of the absurd and misgoverns Scotland and the UK. The case for independence has to be made on its merits to win swing voters.

Independence has to stand for a something – a different Scotland. To some of the more passionate independence supporters the principle is all that matters. But that is not where most voters are. They want to see a picture of a future Scotland painted and filled out. What springs from this is the commonsense view that independence involves a degree of upheaval and inconvenience (circa Brexit but bigger) so it is essential to tell voters in what ways it will be worth that.

We need that future Scotland to be outlined. Maybe it does not have to be completely owned and synonymous with the SNP in its independence offer or indeed any political party. One radical option would be for the Scottish Parliament to agree to set up an initiative which explicitly came up with a future vision for the direction of Scotland – which looked at the strategic choices and difficult stuff and laid out an agenda which informed independence and beyond including the opposition parties. It could even involve a Scotland beyond parliamentarians and elites being involved in that conversation.

The limits of ‘official Scotland’ versus the one we live in

Beyond that on a more mundane level politics has to address the everyday realities of contemporary Scotland. One of the chasms in the SNP’s take on the country is the widening gap between the story of ‘official Scotland’ that the land is getting fairer, more equal and progressive and the rather different reality encountered everyday in the lived experiences of the population.

All over Scotland – from education, health, policing, ferries, local government and more – the state of the country is not in a good place and not heading in the right direction. The reality of underfunded, highly pressured local authorities such as Glasgow struggling to keep services and amenities going is tragic, exposing the lack of democracy in Scotland, the absence of thinking by government beyond the short-term, and underlining the lack of care and nurturing of the public realm that people experience everyday.

A takeaway from this is that Scotland needs some long-term thinking about independence and more. But just as much we need to think about the immediate, the local and personal. Who knows in an ideal world maybe the latter could be used to inform the former. The question is this: is anyone listening in the SNP and wider political classes recognising that the politics on offer cannot seek refuge in being marginally better than Westminster and are as we speak failing the people of Scotland?

The domestic state of affairs at Holyrood and in our wider politics – from the SNP, Tories, Labour, Lib Dems and Greens – is just not good enough for the challenges we face. We have to dare and do better, and surely can do if we try.