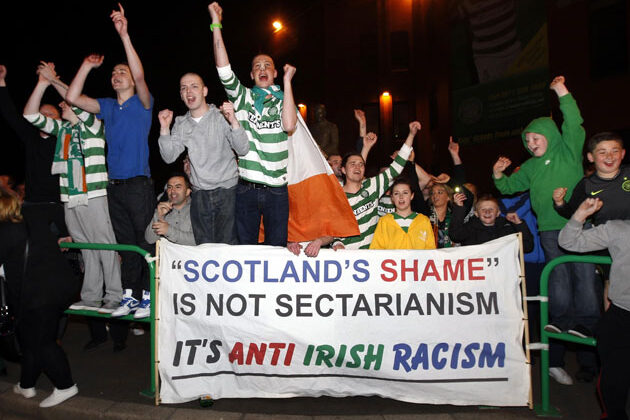 Why we need to get serious about sectarianism in modern Scotland

In 1999, within months of the Scottish Parliament’s establishment, composer James Macmillan delivered an address that had a major impact, ruffling feathers and beginning a long overdue debate. Entitled “Scotland’s Shame”, it spoke about our long disgraceful tradition of anti-Catholicism.

He suggested that “we as a nation have to face up to the ignominy of our most prevalent if unspoken bigotry if we are to move together into the next millennium with a sense of common purpose.” This sparked soul-searching, the publication of a book with the same title that included many expert voices, and led to the Church of Scotland belatedly apologising for its virulent anti-Irish attitudes.

The book “Scotland’s Shame” was put together by historian Prof. Tom Devine who during his academic and public life has contributed immensely to helping us better understand and comprehend the complexities and legacies of our past – whether the Highland Clearances or Scotland’s role in Empire.

Devine brought gravitas to the enduring problem of sectarianism, contextualising the progress made while noting that while we have progressed in terms of structural discrimination, discernible problematic attitudes remain which are more difficult to quantify.

In the subsequent 20 years there has been more initiatives. First Minister Jack McConnell had a summit on sectarianism in 2005 that did not lead anywhere. In 2012, under the SNP, the Offensive Behaviour at Football Act was passed, and then repealed in 2018 – a problematic piece of legislation hated by football fans.

Yet a problem endures. Witness the triumphalist scenes of Rangers fans marching through Glasgow city centre on the weekend past of the “Old Firm” derby. This follows two previous weekends where Rangers fans trashed George Square in the centre of the city, behaved violently and sang offensive songs.

Many were appalled by these actions. But tellingly many chose to not condemn such behaviour including those in positions of influence and responsibility such as Scottish Tory leader Douglas Ross (who also jobs as a Scottish football referee) and Tory MSP (and Rangers fan) Murdo Fraser.

One person happy to comment at length on the most recent events was Tom Devine. On the BBC Scotland programme “The Nine” he stated “the so-called problem of sectarianism is virtually dead in Scotland”, and that the actions were about “a certain football team”: Rangers. This thesis was more fully laid out in a comment piece in The Times where he wrote: “To blame what happened on Sunday on a national disease of continuing sectarianism is manifest nonsense.”

Some write about this without knowing anything about it. In the past week columnist Fiona Rintoul in The Times blamed it on a scattergun list of targets – Catholic schools, poverty, bad neighbours – but with little grasp or experience of the subject. The opinion pollster Mark Diffley responded, saying that this was “an article which blames Catholic schools for the racist behaviour at the weekend makes me pretty angry. It makes no sense on any level and is blatant victim blaming.”

Scotland has an enduring problem with a minority of anti-Catholic bigots. This manifests itself in football, but can be found across society, in pubs, people’s homes and gardens, public spaces, media – in short, any place where people gather or interact.

There is open denialism in parts of Scotland that this is a real societal problem – one articulated by too many people who have influential platforms. Sociologist Stuart Waiton believes that the “emergence of sectarianism” as an issue is a creation of a liberal commentariat – “the ‘claimsmakers’ of, in the main, Scotland’s political elites.”

One does not need to buy into the self-mythology of Celtic and Rangers fans and the co-dependency of the two clubs inherent in the term “Old Firm” to note that there is a critical imbalance between the two. In terms of recorded evidence of violence and incidents which is conducted by a tiny minority of fans, Rangers fans are more prone to inappropriate, offensive behaviour than Celtic fans. These are incontestable facts, but some for a variety of reasons choose to ignore them.

One way of trying to dismiss this issue is to put it all down to a group of paid professional campaigners such as Nil By Mouth: Devine criticising an “anti-sectarian industry” which has a self-interest in over-stating the problem to justify their existence and aid influence and funding.

Scotland has to be able to talk about difficult things, including its dark sides and the prejudice and racism which still exists. The toxic legacy of sectarianism has to be called out and named as what it is: anti-Catholic, anti-Irish and racist. Too many institutions and opinions in polite society still have a problem with calling it these things – including BBC Scotland. This is still a subject too many would like to just sweep under the carpet.

There has to be honesty and clarity drawing from actual evidence, understanding that Scotland has changed, but that we still have an enduring problem. It cannot and must not be wished away. Nor should the Scottish Government 2015 Advisory Group on Tackling Sectarianism which concluded that only “remnants” of sectarian attitudes remain be used to say that there are not major issues to address and become too complacent or self-congratulatory.

The no-go areas, barriers and social apartheid which discriminated against and marginalised Catholics have withered and in many places disappeared, but that doesn’t mean we can diminish the issue or just pretend there isn’t a societal problem. Graham Spiers wrote a while back on the sectarian issue: “It won’t be fixed. There isn’t the will or the courage out there” and he has a point.

But is that really who we want to be? Prisoners of the worst of our past haunting us in the present? Continually worried about feeling ashamed about neanderthal attitudes enduring in the Scotland of 2021? If we don’t dare to act we will be back where we were in Glasgow a weekend past, and that diminishes the city, all of Scotland and how the rest of the world sees us.