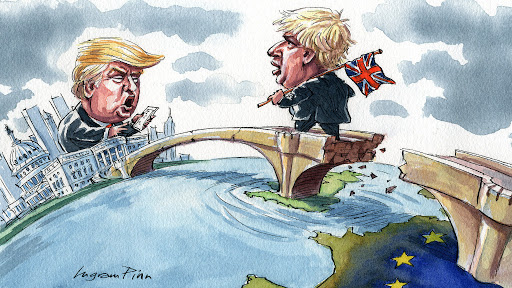 Bad history leads to bad politics – from Trump to Brexit and Scotland Gerry Hassan Scottish Review, September 2nd 2020 The past is always with us, being remade and reinterpreted to suit the needs of the present. Yet in today’s world of complexity, change and messiness - as well as constant information and disinformation - a lot of questionable interpretations of the past are gaining currency and being used to justify bad politics in the here and now. The most obvious is Trump who, despite over 180,000 Americans officially dead from COVID-19, is running for re-election as President on a

‘Arise Now and Be a Nation Again’: The neverending story of Scotland’s history Gerry Hassan Scottish Review, March 23rd 2016 Tom Devine has been a huge intellectual influence in Scotland in recent decades, having made major and thoughtful contributions to many important historical and contemporary debates. His latest work, ‘Independence or Union: Scotland’s Past and Scotland’s Present’ is part a summary of his previous research, ‘The Scottish Nation’ and his work on Scotland’s Empire, seen through the prism of Scotland’s place and influence in the union. This descriptive, wide-ranging book covers not only over 300 years of Scottish history,

Continue Reading ‘Arise Now and Be a Nation Again’: The neverending story of Scotland’s history