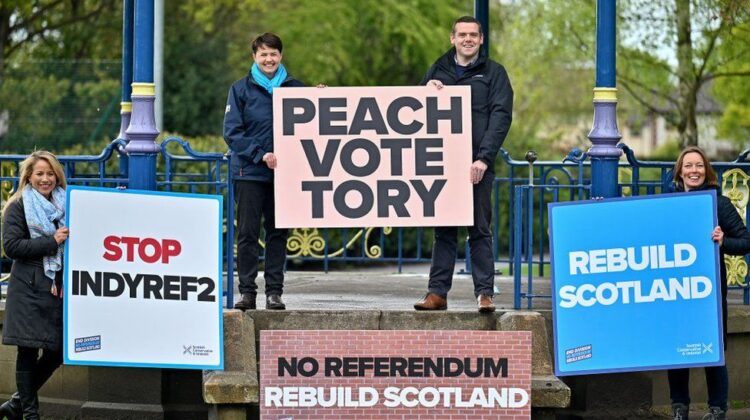 The Scottish Tories have had a shoogly past week. Douglas Ross, Scottish Tory leader, dared to put his head above the parapet and say the unthinkable – that Boris Johnson was long past his sell-by-date and should for once do the decent thing and resign. He was subsequently followed by the entire group of Tory MSPs at Holyrood; while former Scots Tory leader Ruth Davidson was even more indignant and incandescent with fury.

This was met by Jacob Rees-Mogg calling Douglas Ross ‘a lightweight’ and even going as far as saying ‘My instant response is he’s in Elgin and the national Tory leader is in London’ – comments which are not only Londoncentric but disrespectful of the great folk of Elgin and Morayshire.

At first this might have seemed a high-wire act by Ross – challenging a sitting Tory PM – but as the entire Tory Holyrood Group swung behind him in unity it seems that he might for once have chosen his ground wisely and be on to something.

Boris Johnson is toxic in Scotland. No sitting UK PM has been as unpopular. Not even Thatcher or Blair; Cameron or May. He is a mobiliser for independence; an aid to Nicola Sturgeon; and an example of all that is wrong in Toryism and in particular English Toryism.

Toryism does get a bad press in Scotland for reasons which everyone can understand. This tends to reduce it to a set of negative caricatures and stereotypes which the likes of Johnson and Cameron before him assist. Toryism in this account is out of touch, the domain of arrogant, entitled toffs whose sole understanding of Scotland is of a land in which they hunt, shoot and fish when they holiday in some ancestral pile.

But there is more to Scottish Toryism than that. Sure that is one part of the tradition – the Alec Douglas Home types with their caps and guns looking for wildlife to kill. But there are many other types including a working class tradition which was once very popular, then disappeared, and has made a small revival in recent years aided by Ruth Davidson and the independence question.

There is a distinct rationale, appeal and identity to Scottish Toryism. It is a Toryism different from the English variety – consistently less gung-ho Thatcherite, less caught up in the Brexit mania, and much more critical of Boris Johnson’s degenerative Conservatism.

There is increasingly a political terrain for Scottish Toryism. For one there is the nature of the appeal of the SNP. Even at their peak support the SNP only spoke at best for just under half of Scottish voters. This meant that more than half of Scotland held out or was immune to their charm. That majority Scotland needs to have a voice and representation and the Tories are best placed to do that for now and the foreseeable future.

Hence back to the idea of a separate Scottish Tory Party. There are challenges in returning to Murdo Fraser’s 2011 pitch for the Tory leadership – where he was defeated by Ruth Davidson. It was right then and it is even more right now.

Former Scottish Tory MSP Adam Tomkins showed some of the potential pitfalls over the weekend getting himself into a complete mess over this change. Supporting the idea in principle he then went on to outline a future in which there was a separate Tory Party for the Scottish Parliament elections but not a separate party for Westminster elections. This would mean there would not really be a separate, autonomous Tory Party.

A separate Scottish Tory Party is a shift in the right direction. The current position for the Tories – as with Labour – is indefensible. Remember Johann Lamont’s valedictory comments when she resigned as leader of Scottish Labour on how the party here is nothing but a ‘branch office’ of ‘London Labour’ and seen as such by Westminster Labour politicians.

A new Tory Party would have the chance to challenge the SNP on their most secure, crucial ground – ‘Standing up for Scotland’s interests’. Since the major electoral breakthrough of the SNP from the mid-1970s consistent polling on this issue points in the same direction. Namely that the SNP have been thought of by between two-thirds to three-quarters of Scottish voters as standing up for and representing Scotland’s interests.

This major advantage to the SNP was there in the mid-1970s, evident in the shallow days of the 1980s, present at the advent of the Scottish Parliament, and still in existence as the SNP have become a party of government and won elections. This has given the SNP an enormous advantage through the years, and has meant that voters see the presence and existence of the SNP as a positive and a good thing for Scotland, irrespective of how they might vote. And to this day it gives the SNP a protective shield in how voters view what they do in office, not gauging them in the way that they might a government of another party.

Challenge the SNP on this terrain and you would probably never outdo the Nats, but you could critically narrow their built-in advantage. A comparison here is with the Tories and the NHS. They know they can never outflank Labour on trust on the NHS and that the best they can do and have tried to do under successive leaders post-Thatcher is to narrow and try to neutralise the issue and Labour’s advantage as much as possible.

A Scottish Tory Party not only needs to and should be autonomous and have an identity, values and a brand – it ought to have its own ideas, strand of thinking, and policies. And that would be a major opportunity and a challenge given that in recent decades the Scottish Tories have generally been averse to having any of their own ideas.

They were never very Thatcherite but were loyal to the leadership of Thatcher, came up with the idea of the poll tax in the light of the 1985 rates revaluation, and after it blew them up and contributed to bringing down their dear leader seemed to take the view that having distinctive ideas and policies was generally a bad, even dangerous, thing.

The advent of an autonomous Scottish Tory Party would not only be a positive; it could be a significant development in politics, and even potentially a gamechanger. It could force other parties including the Scottish ‘branch office’ of ‘London Labour’ to finally get their act together and become a distinctive operation run from and by here. And it might encourage the Lib Dems who have a UK federal structure to have a look at how they run things and embrace being a completely Scottish-run enterprise.

If all the main parties in Scotland were Scottish-run and autonomous it would be easier and more conducive to talking about and thinking about issues of substance. The SNP would have less traction invoking the clarion call of ‘Standing up for Scotland’s interests’ – as we would be more able to question and scrutinise whose Scotland they are mostly defending and representing.

This is a debate long overdue more than twenty years into the existence of the Scottish Parliament. The SNP might try and present themselves as defenders of a single, cohesive Scotland, where they look out for and champion the interests of every group – no matter their social class, age or geography. But in reality they have made choices in government that have aided the Scotland already comfortably off, affluent and for whom the domestic status quo works rather well.

That present unsatisfactory state of affairs needs challenging and other alternatives explored which look at addressing some of the long-term issues this country faces: declining education and health services, atrophied local government, and a failure to redistribute money and resources to those most in need, for all the social democratic rhetoric.

The devil will no doubt be in the detail and change will not come about overnight. But the Scottish Tories have to change if they want to break out of their permanent electoral ghetto and have some influence and impact.

Boris Johnson’s careless, destructive Conservatism and unionism might finally produce a major change in the state of the union that is long lasting, worthwhile and might have benefits. If so it will be a change that he and the likes of Jacob Rees-Mogg can take no credit for, and which will survive and endure well after this disastrous, incompetent Tory Government has passed into history.