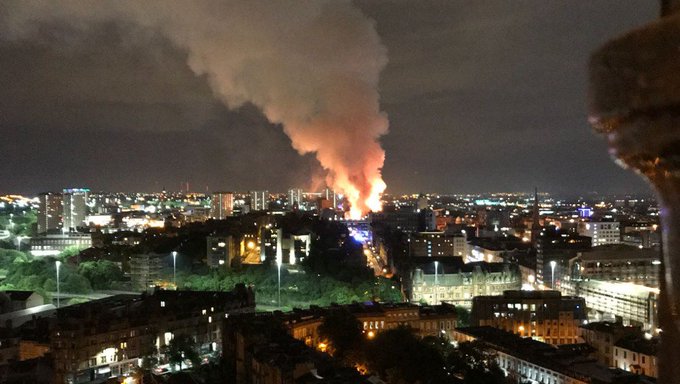 Glasgow School of Art, Power and the Chumocracy

How power is held to account has been a problem in Scotland, predating the Scottish Parliament and the independence debate – neither of which have aided the shining of a light into the recesses of public life which for too long have been in darkness.

Many public institutions and bodies have fallen short and let down people, with their failings only brought to wider attention too late or long after the event – from deaths in hospitals such as the Queen Elizabeth hospital in Glasgow to the ongoing farrago about ferry contracts, alongside historical systemic abuse in the Catholic Church and other institutions.

Scandals come in different shapes and forms. One of recent times is that of the legendary Glasgow School of Art which tragically has seen two disastrous fires in 2014 and 2018 rip through and destroy the world-famous Mackintosh Building.

Both fires raised serious questions about their origins and how they were managed in the aftermath. There were also profound differences between how people saw each separate disaster. The first saw many people identify with and rally around the GSA, with it seen as a tragedy that we all shared in. The second was very different, with a public sense of anger and rage at those running the GSA who, as custodians of a precious institution, seemed to be asleep at the wheel and filled with a sense of entitlement and their own self-importance.

All of these sentiments were brought to a head in the past week when the GSA chair Muriel Gray, who has been in post for eight years during the time of both fires, belatedly announced that she would be stepping down.

In a valedictory interview in The Times undertaken with the journalist Mike Wade announcing her resignation, Gray offered no mea culpa or admission of shortcomings and mistakes on her part in her eight years. Instead, she struck a tone of self-satisfaction and self-belief – dismissing out of hand critics of her role and that of the institution’s senior personnel.

Asked if she should have resigned earlier given the pointed criticism of the institution and her role after the second fire, she was utterly dismissive. ‘I went, ‘Why?’’ she said, ‘If I thought poor governance or poor management had led to either fire, I would go, ‘Yeah’, but it just didn’t.’

GSA is well-known for its no-nonsense news management that has in the past involved disciplining high profile staff members who have dared to criticise senior management – or who have even just dared to speak on their own area of expertise without going through the bureaucratic systems. In recent years this does not exactly signal an institution confident in itself, in what it stands for and its expert staff. But this is a regime that Gray has been happy to front up and to represent publicly.

Some of this disquiet came to the fore when GSA were accused after the 2014 fire of selective and distortive spin. They released an official press release the day before a report by the Scottish Fire and Rescue Service in November 2014 detailing how the fire began in a basement studio when a student used a foam spray close to a video projector. Thus, the GSA spin became the media story with takes such as ‘fire service report finds student art and building design fed blaze’ and ‘student’s degree project caused blaze’.

The actual report included the following analysis missing from GSA’s account: ‘An area to the left of the projector had panels removed allowing access for ongoing maintenance. This timber-lined void acted like a chimney and allowed flames, hot gases and smoke to travel vertically.’ This resulted in Gordon Gibb, former director of professional studies at the Mackintosh School, alleging that senior management were ‘inept and deficient’.

Despite these institutional failings, Gray takes no responsibility for the issues themselves or this catalogue of spin. Instead she denies that such activities took place, stating that ‘It’s not fair to say things were hushed up’ when in reality the catalogue of mistakes and lack of truth-telling is even more serious.

She rejected the idea that Tom Inns, GSA Director from 2013-18, had been driven out of the door. Dismissing that he had ‘carried the can’ for the fires, she said that ‘Resigning isn’t carrying the can, it’s leaving people to pick up the shit. Carrying the can is staying on and taking what’s coming. Resigning would have been brilliant. I would have had a fantastic time these last few years.’ At the same time, she dismissed criticism of GSA’s appeal for funds after the first fire and any misallocation of funds as ‘bollocks’.

Gray has not had an easy personal time in the past few years with her husband Hamish Barbour being seriously ill, leading her to temporarily stand down as chair in 2019 to support him. But that doesn’t excuse the catalogue of mistakes by GSA and the subsequent dissembling by the institution.

Such was the partial take by Gray last week that the former director Tom Inns felt that he had to write in to The Times to question her take, asking: ‘Is this the way the history of the Glasgow School of Art should be written and remembered?’ The sour odour of a gagging agreement seems to be wafting across this, with a former director perhaps wanting to signal in code that we were not being told the whole truth.

How did people respond to the long overdue Gray resignation? The GSA ran out its usual Pravda like announcement from its ‘Media Centre’ eulogising Gray for her ‘eight years of passionate and dedicated leadership’, claiming that ‘her tireless support will be hugely missed’.

Elsewhere, there were shards of dissent from this official party line with one observer noting of Gray’s reign and resignation: ‘For someone to preside over it burning down, TWICE, she showed very little in the way of contrition and nothing in the way of humility.’ Another commented that the absence of understanding even ‘constructive criticism’ was a hallmark of ‘the kind of institutional rot’ at the top of the GSA.

Yet, how did mainstream media commentators describe the end of Gray’s less than hugely successful reign? Stephen Daisley, who writes in the Daily Mail and Spectator, is a well-known scourge of all things SNP and independence and always on the look-out for abuses of power by the Scottish Government. Daisley you would have thought might be scathing of the incompetence and evasions of responsibility in the Gray era GSA.  Instead he wrote: ‘Muriel Gray has put her all into the GSA and into rebuilding it. A lot of bottles have been chucked at her – I suppose that comes with the territory of being the face of a beloved institution – but she’s shown steel, commitment and fierce love for the GSA.’

Then there is Chris Deerin, head of the right-wing Reform Scotland and former lobbyist at Charlotte Street Partners, who put it as uncritically: ‘Muriel Gray is one of the finest and bravest people I know. It’s typical of her that she’s borne all the shit of the past few years and is now standing down to allow GSA to move on.’

These cringe-worthy, sycophantic takes are the result of a number of factors. One is the wannabe nature of part of public life desperate to big up the insider class and people they regard as players coupled with the politics and culture of access and mutual favouritism which blights so much of our public life and fills it with self-serving mediocrities.

Another element is the distortive effect of the constitutional question. Both Daisley and Deerin are pro-union commentators. Gray has been vocally pro-union, and for some in today’s Scotland that is sadly all that matters.

One of the worst aspects of this is how the deleterious effects of chumocracy, cronyist public life buries conflict of interest, and obscures proper scrutiny and accountability. Daisley and Deerin are doing no-one any favours bar in trying to save Gray’s reputation and are effectively dismissing out of hand serious, substantial allegations of mistakes and worse are not being honest about the truth of those mistakes then and subsequently.

This is not some arcane point. If our public culture and media cannot hold individuals and institutions to account, and instead puts up with obfuscation and selective readings, we all lose. One prominent academic identified the interconnections and close nexus of relationships that inevitably leads to glossing over Gray’s failings: ‘The lobbyist/columnist/establishment nexus is very unhealthy in Scotland – and has to be brought out into the open and challenged. It is damaging politics, media and public debate.’

The story of what has happened to GSA is a national and international scandal, and it is something that people should be filled with a righteous fury about – from systemic incompetence, to the selective half-truths peddled to the public, and the sheer affront of administrators and managers who presided over an era of not just two fires, but have continued to make evasive, disingenuous public statements.

This is a story for our times in an age when the very nature of public institutions is under attack from outwith and within. We in Scotland like to pretend we are somehow different from the rest of the UK and ‘Tory England’, but in reality we are no better. The same class of puffed up, self-important, cultural and institutional vandals have in places reeked nearly as much havoc in Scotland as elsewhere in the UK, and the reign of Gray must go down as one of the worst in recent times.

The bigger story is how do we address power and its abuse in this country? How do we start flushing out and holding to account the institutional failings and shortcomings in a way which allows our public life and nation to thrive? How in short do we put the ‘public’ into public institutions such as Glasgow School of Art which are much loved and treasured, and which deserve so much better than the shoddy regime running it over the past eight years?

If Glasgow School of Art’s twin fires were to act as a salutary warning of what can happen when the insider class thinks it has an innate right to rule, then at least it would have served a constructive purpose. But the words and deeds of Gray indicate that she feels she has done nothing wrong and has nothing to learn. And unless we challenge such views, there will be more scandals and controversies to come at some of our most cherished institutions.