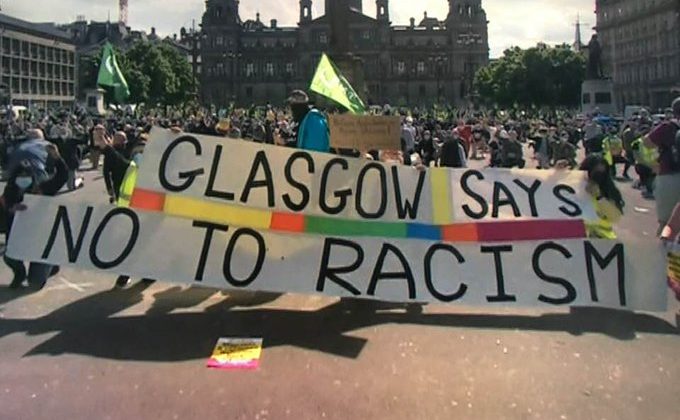 How to organise and defeat the forces of fascism, racism and bigotry

The popularity and power of the message ‘Black Lives Matter’ was always going to provoke a reaction.

In the past fortnight there has been the emergence of the ultra-right on the streets of the UK. And in the past week, these ugly forces congregated in George Square, Glasgow on Wednesday disrupting a peaceful march in support of asylum seekers and refugees.

This is unwelcome, ugly and not completely surprising. But it raises questions about the size and scale of the constituency of the ultra-right in Scotland. Then there is the degree to which this is seen as more of an English predicament than Scotland – and whether this itself is a delusion and part of the problem. And critically, there is the challenge of how we deal with the ultra-right here in Scotland, take them on and defeat them.

Scotland like nearly everywhere else has had a tradition at the margins of politics of ultra-right sentiment and protest. The people who descended on George Square in the past week did so under the banner of the National Defence League.

They are the latest version of what was previously the Scottish Defence League who rebranded themselves last year after having their Facebook page removed in May 2019. The National Defence League are a miniscule grouplet – racist, white supremacist, Islamophobic, anti-Irish and anti-Catholic – combining all the usual tropes and signatures tunes of the far right.

Scotland has antecedents here on the far right and amongst those with fascist sympathies that jar with the story we like to tell ourselves and which are timely warnings of how such a virulent politics of hatred and racism can find a popular appeal and even representation. In the 1920s and 1930s Irish immigration was a hugely controversial subject in many parts of Scotland, with anti-Catholic sentiment widespread in places such as the Church of Scotland.

These were not marginal but powerful forces for reaction and bigotry on the right, and their agenda was clear. They stood on a platform of ‘No Rome on the Rates’, the repeal of the Education (Scotland) Act 1918 which brought Catholic schools into the state sector, the banning of Catholics from public services, and the repatriation of Catholics from Scotland to Ireland. This was the racist politics of a Protestant backlash which won significant electoral support in both cities.

Both parties fell apart due to internal divisions, but lest we think this was all in the long distant past and has little connection to the present, John Cormack, the Edinburgh leader, retained his Leith ward as an independent until he retired in 1962. An annual event at the Mound celebrating Protestant Action continued until 1975, falling into disuse due to an aging, declining membership.

Cormack survived in post-war Edinburgh council politics until the 1960s aided by the Tories, then called ‘Progressives’, who successfully supported his bailieship in 1955. Nearly thirty years after this, in 1984, Hamish Henderson pointed out in the letters page of The Scotsman the disreputable role of the Tories in this episode, writing of the Tory action that: ‘Surely nothing could have shown up with more devasting clarity the contempt of these gentry for their fellow citizens’ – putting onto the bench ‘the founder of ‘Kormack’s Kaledonian Klan’’.

Some in Scotland take succour from the belief that fascism and the forces of the ultra-right on these isles are predominantly an English phenomenon. It is true that the forces of the English far-right have had more of a significant political presence – but that is hardly room for complacency or self-congratulation here.

From Oswald Mosley’s failed attempt to capitalise on the Notting Hill riots in 1958, to Enoch Powell’s infamous ‘rivers of blood’ speech in 1968, to the National Front’s malevolent visibility on the streets of English cities in the late 1970s, and the brief rise of Nick Griffin and the British National Party when they won two MEP seats in the 2009 Euro elections, there is a long odious tradition of the ultra-right, fascists and racists in post-war England trying – and sometimes succeeding – in having an impact in party politics.

Then there are the reactionary forces which contributed to and were given further permission by Brexit. All sorts of racist and xenophobic prejudices gained visibility, while hate crimes against people of colour and immigrants spiked.

There has been in recent years pre-Brexit a gathering resentment in parts of England about Scotland’s independence referendum and place in the union, along with Welsh and Northern Irish referendums. This has resulted in such responses as people in England asking ‘Why do we never get a vote?’ and ‘When are we going to be consulted?’. All of which fed into Brexit.

All of this brings us to the big issue: how do we successfully take on and defeat the poison of the ultra-right? It requires a multi-pronged approach covering naming, organisation, dealing with the injustices of society, and understanding that racists and the ultra-right come in many different forms some of which cloak themselves in a veneer of respectability.

First, the ultra-right have to be called out for what they are – they have to be named, shamed and labelled as forces of hate. Many mainstream media outlets, public bodies and public figures fall at this first hurdle.

Take the George Square protests on Wednesday past. Numerous news outlets refused to label the protest as ultra-right or far right, or being made up of self-declared racists chanting racist, hate filled slogans. Instead, many just called them ‘protesters’.

There are those who seek to muddy the water and suggest a moral equivalence between violent racists and non-violent anti-racists – as was the case on Wednesday. David Hamilton, chair of the Scottish Police Federation, who represent over 18,000 police officers, falls into this camp with his comment on Thursday that: ‘There is no moral high ground to be claimed. Right or left; green or blue; unionist or nationalist; statue wrecker or statue protector, your side is as guilty as the other’. This is the logic of Trump’s ‘very fine people on both sides’ after a neo-Nazi protest in Charlottesville.

There are prominent public figures such as Muriel Gray, chair of Glasgow School of Art, who rushed to comment on George Square: ‘Wonder what would happen, in the hottest spring for years, if lots of young men full of testosterone were locked inside their homes, with no jobs, no sport to play or watch and no pubs to go to meet their pals?’

This came over as at best wilful, deliberate ignorance of ultra-right protest. Napier University academic Eamonn O’Neill responded: ‘Blaming testosterone is a poor thesis. How about calling out blatant anti-Catholic bigotry and racism on this occasion?’ Not calling the ultra-right, fascists and racists what they are normalises and sanitises them – and aids their desire for mainstream respectability.

Second, defeating the ultra-right requires organisation, resources and activism. It needs people putting the time in creating the infrastructure and support systems to stand in solidarity with Black Lives Matter and pro-asylum seeker and refugee marches. An inspiring historical example is the work of Rock Against Racism (RAR) who took on the National Front and prominent racists in music in the late 1970s: a time when David Bowie had done a Nazi salute and Eric Clapton been supportive of Enoch Powell.

Rock Against Racism made a statement by their existence – of black and white uniting against racism, holding high profile concerts, and giving prominence to black musicians and artists. The award-winning film ‘White Riot’ which came out earlier this year pinpointed the organisation’s courage, political impact and grassroots nature the length and breadth of the UK, and how it acted as a catalyst for anti-racist music and political education in how to tackle racists.

Mykaell Riley, of Steel Pulse – the Birmingham reggae band who played at RAR concerts – commented that ‘RAR called for people to come out and support and people did in their thousands. It’s very different when you click, and that’s it. It’s so easy now to engage and just as easy to disengage.’

Rubika Shah, director of ‘White Riot’ said she deliberately left in the film National Front slogans from the 1970s such as ‘It’s our country, let’s win it back’ as they carry echoes of Brexit’s ‘Take Back Control’, observing that ‘It’s scary how that language creeps back in.’ From this congruence she wonders about the politics of the right now: ‘whether it is deep seated in their subconscious or if they’re actually going out of their way to use that language because it evokes what was going on in the late 70s.’

Third, the lessons of the past have to be learnt and the mistakes of previous centre-left administrations led by Harold Wilson and Tony Blair in the UK and Bill Clinton and Barack Obama in the US, understood. Structural inequalities which disfigure society – class, race and ethnicity, gender and generationally – have to be addressed and narrowed dramatically. This is something which thirty years of post-war Labour Governments in the UK made much progress on but not by enough, and failed to tackle the citadels of power and privilege which breed inequality.

Fourth, all of the above requires understanding and recognising the many faces and facets of the forces of the ultra-right. Namely that the most powerful and pernicious expressions of racism are not found in the gatherings of George Square or anywhere else recently in protest. Rather they are to be found in the corridors of the British establishment, forces of institutional racism, and those on the so-called mainstream right, such as ‘The Spectator’ and ‘Daily Telegraph’ who fuel the fires of racism and bigotry.

The British establishment throughout its history including Empire, Windrush, Stephen Lawrence, ‘hostile environment’, Grenfell, and ‘No Recourse to Public Funds’ has a long dishonourable tradition of racism and upholding racial inequality which continues to this day. As writer and campaigner George Monbiot said this week: ‘Lying about history, censoring and editing is what the political establishment does’ and this is even more true when it comes to the British establishment and the legacy of Empire.

Scotland cannot and must not avoid challenging the racists and ultra-right in our midst, or our role in Empire and slavery in the past, or the scale to which numerous bodies and elites have and still practice institutional racism. But we also have to be honest about the nature of the British state and the myth of Britain as a force for good in the world when its power was based on exploitation and expropriation.

That entails not only calling out Britain’s past and present ill-deeds, but looking deep into our own past and current practices in Scotland. We are literally standing on the shoulders of centuries of the subjugation of millions.