Progressive politics has to talk about class and race, and challenge the false divisions of the right Gerry Hassan The National, 24 May 2022 These are divisive times in politics and public life; strident voices stoking division are all around. Many of them tell us that the age we live is shaped by “culture wars” and “cancel culture”. Cheap talk is everywhere - surrounded by noise, charge and counter-charge. New media platforms like Rupert Murdoch’s Talk TV assist loud men such as Piers Morgan to broadcast their ill-informed opinions to the world – even when there is next to no

Continue Reading Progressive politics has to talk about class and race, and challenge the false divisions of the right

The cancel culture of the anti-woke brigade Gerry Hassan Scottish Review, March 17th 2021 Everywhere you look in the media the word ‘woke’ is used as an insult. It has become a trigger word used by the right, reactionaries, populists - and those uncomfortable with identity politics and what they see as the onward march of political correctness. Instead, they pose the word ‘woke’ to sow division; to label and dismiss people who stand for things like social justice, racial equality and against homophobia, and to close down debate and demands for change in society. The origins of the word

Continue Reading The cancel culture of the anti-woke brigade 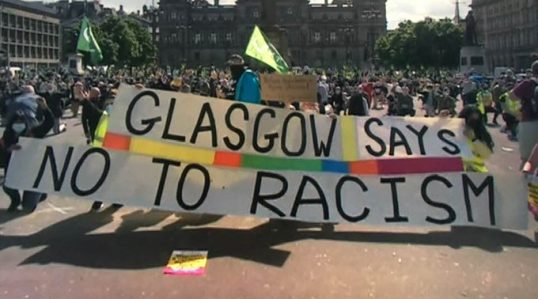 How to organise and defeat the forces of fascism, racism and bigotry Gerry Hassan Sunday National, June 21st 2020 The popularity and power of the message ‘Black Lives Matter’ was always going to provoke a reaction. In the past fortnight there has been the emergence of the ultra-right on the streets of the UK. And in the past week, these ugly forces congregated in George Square, Glasgow on Wednesday disrupting a peaceful march in support of asylum seekers and refugees. This is unwelcome, ugly and not completely surprising. But it raises questions about the size and scale of the constituency

Continue Reading How to organise and defeat the forces of fascism, racism and bigotry

Enoch Powell’s Ghost and Bigotry still haunts modern Britain Gerry Hassan Scottish Review, April 17th 2018 This week sees the 50th anniversary of Enoch Powell’s infamous ‘Rivers of Blood’ speech which occurred on April 20th 1968, with the BBC deciding to recreate it and broadcast on ‘Archive on 4’ - read by actor Ian McDiarmid. The speech has never been broadcast before in full, and this decision hasn’t been without controversy, both before and afterwards. It was an extraordinary experience to hear this much cited, even legendary, speech in its entirety - 45 minutes of powerful, passionate, and shockingly over