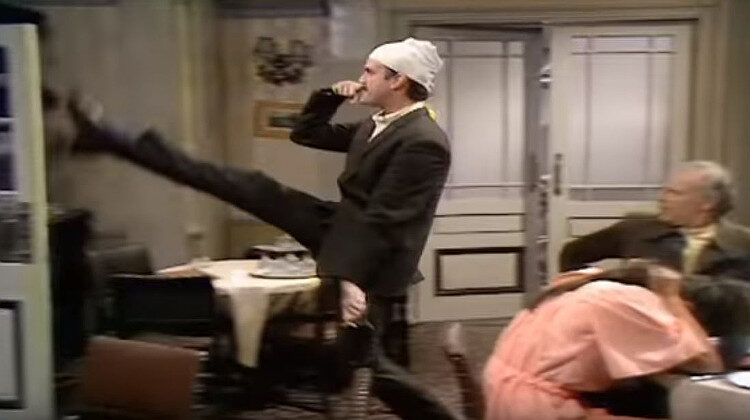 Luftwaffle: The Trashing of the Last Good Story of Britain

The Second World War looms large in the life of Britain. Never a day passes without a politician, public figure or celebrity making some crass reference to the war, linking it to the present convulsions and challenges which the UK faces.

Once upon a time World War Two references were few and far between, and chosen with care and humility. This was undoubtedly true for the immediate decades after the war of 1945-65 – a period which ended with the death of Churchill – that was imbued with the direct experience of millions who contributed to the defence of the UK and defeat of fascism, and who as we all know, mostly did not want to talk about it too often.

There then followed the counter-reaction to what was, as perceived by many, the suffocating blanket of the legacy of the war that found its voice in comedy and satire in the 1960s and 1970s, immortalised in the Fawlty Towers sketch of Basil Fawlty being asked by a German guest to ‘stop going on about the war’. But in the past forty years as UK politics and culture have chased the chimera of greatness and an imagined imperial past, so the 1939-45 conflict has been dragged back into centreview and claimed for the new project of ‘Great British Powerism’ – one with profound consequences for the present and future.

One critical point from the above is that the current ubiquitous levels of World War Two references have not always been a constant since 1945 but gone through ebbs and flows. Their contemporary ever-presentism is a direct result of the past 40 years or so of British society, of the retreat of the labour and trade union movements, of the rightward turn and dumbing down of mainstream media, and the marginalisation of serious historical documentary onto specialist platforms, and much more.

Recent events have put this backstory into turbo drive with Brexit’s ongoing mess, the UK’s continued stand-off and arguments with the EU, its continual evasion of the confusion and the chaos it has created with a Brexit with no plan, COVID, and food and fuel shortages. Alongside and underpinning this is the sheer incompetence, arrogance and denialism of the UK Government meaning that the UK is not in a good place with some desperately looking for metaphors and imagery to hang this on.

There are only two choices in our thin public culture historically and intellectually: the 1970s and World War Two. The former does not sit well on the right as it involves the collapse of a Tory Government, the power of the miners and trade unions, and is too close to be safely caricatured. Nevertheless, some invoking of the 1970s still appears: conflating the two miners’ strikes and winter of discontent into one set of images where ‘the dead went unburied’ and the lights went out. But none of this compares with the wartime fix.

In recent days we have had former Tory leader Iain Duncan Smith invoke ‘the Blitz Spirit’ in aid of the UK Government’s push to get people back to their workplaces. Duncan Smith dared to write in the Mail on Sunday: ‘When I think of all the brave civil servants who went to work in the 1940s, determined to do their bit regardless of the threat from falling bombs, I wonder what has happened to us as a nation.’

Following this former David Cameron speechwriter Clare Foges went one further – writing about the upside and camaraderie people felt while they were being bombed by the Nazis and suggesting we should embrace a similar stoicism in terms of current shortages of life’s essentials. Foges wrote of the coming crises in The Times: ‘I reckon a large chunk of the population doesn’t just endure national crises like these but rather enjoys them. Yes, tracking down petrol is irritating and no one relishes the thought of bare supermarket shelves but the truth is that many find the collective experience of a crisis diverting and even fun.’

Related to this is the ubiquity of Winston Churchill in discussions on British history, who is now forced into the simple dichotomy of hero or villain – the ‘greatest Briton ever’ or uber-racist and imperialist. Churchill happened to be right on the biggest threat to the Western democracies in the 1930s: the rise of Nazi and Italian fascist aggression and opposed Tory-led appeasement. Yet, as Anthony Barnett wrote nearly four decades ago, ‘Churchillism’ is a very different proposition from Churchill the actual politician, and used to mask the political consensus of elites and main parties of the Transatlantic relationship and the UK’s worldview being synonymous with the USA.

Underpinning ‘Churchillism’ is the select usage of phrases and terms from the man himself: ‘special relationship’ between UK and US being used by Churchill in February 1944 to underpin the alliance between himself and Roosevelt; ‘our finest hour’ along with the endeavours of ‘the few’ in Fighter Command have entered into the popular lexicon. But it doesn’t end there: ‘the Battle of the Atlantic’ was a Churchill phrase of March 1941; ‘the Battle of Britain’ first appeared in a Commons speech of June 1940: ‘the Battle of France is over. I expect the Battle of Britain is about to begin.’ This is about more than Churchill writing the first draft of history as he boasted, imbuing and defining the UK to the present.

World War Two and All That

Where will the continual obsession with World War Two end? And why is there such a narrow framework of the war bordering on the ahistoric, focusing on the period between May 1940 and June 1941 when the UK according to mythology ‘stood alone’ – but in fact didn’t still being able to draw upon the global manpower and resources of the Empire?

All of this deliberately misses the period before – of Neville Chamberlain, appeasement and the Tory ‘guilty men’ – many who were happy to leave Germany to dominate Europe, and others such as Tory ‘Chips’ Channon (of diaries fame) who were unapologetically pro-Nazi.

And it ignores the period afterwards of the Nazi attack on the Soviet Union, let alone the Japanese surprise assault on Pearl Harbor, as well as the mass mobilisation of the British people on the domestic front in support of ‘total war’ and which became ‘the people’s war’, leading to the rejection of Tory laissez-faire and creation of the post-war welfare state.

The narrow framing underlines that invoking World War Two is not really about the conflict in question, but instead advancing and championing a particular version of Britain today which rewrites and reclaims our past. It is trying to do so for the forces of power, privilege and reaction, taking exception to any sustained critique of the British Empire, colonialism and imperialism – in favour of continuing and strengthening the hold of the Empire State in the present.

Such is the extent of this that comedian Alex Kealy has coined a word to describe this: Luftwaffle:

Luftwaffle (verb): to bang on about the Second World War despite no experience or understanding of it.

Otto English in Byline Times wrote: ‘Luftwaffle is nostalgia for unlived experiences’, continuing: ‘It is responsible for the lingering menace of ‘Blitz Spirit’ and its equally meaningless sibling ‘Dunkirk Spirit’ – evoked at every turn by people who were not there. It sustains the national myth that millions of Britons are imbued with a plucky essence inherited from the ‘unique’ wartime generation.’

Luftwaffle will be with us for some time – appropriating what has become the last good story for Britain, and using it for reactionary, regressive, xenophobic ends. Where are the other good stories and accounts of hope and change?

Sadly they have in the present and recent past been marginalised and defeated. Think of Britain as the land of compassion and solidarity aiding successive generations of working people and the working classes to have greater opportunity in a land of fairness. No one can now invoke that world as present-day Britain.

The same is true of Britain as a welcoming safe haven for the dispossessed of the world – after Windrush, ‘hostile environment’ and Theresa May and Priti Patel as past and present Home Secretaries. And there is the Britain as a force for good argument, still trundled out by today’s Tories and Gordon Brown, but which has little connection to the Iraq war, 20 years in Afghanistan, blood money relationship with Saudi Arabia, or the slashing of overseas aid.

Two final observations. The appropriation of World War Two by the forces of the right does a disservice to the fight against Nazi and fascist aggression which cost the lives of hundreds of thousands of British citizens. It ignores that Nazism and fascism were forces of the uber-right, forces of the populist uber-right, which waged faux wars against their domestic elites and establishments, while making alliances with and strengthening those forces.

And that the Tories and their disastrous policy of appeasement and retreat in the face of the Nazis and fascists – a stance which was widely supported in the upper classes, ruling elites and British royalty – was a complete misreading of the nature of the threat. And as historian Richard Overy makes clear in his magisterial study of the long war just published, Blood and Ruins: The Great Imperial War 1931-1945, more about the preservation of British imperialism as it attempted to accommodate the claims of German imperialism.

Nearly as fundamental in terms of the UK is where, when and how can compelling stories of the present and future UK appear? Without them it seems that the UK is ultimately doomed – caught in a prison of either endless evoking of World War Two to camouflage the brutal, miserablist realities of Tory Britain, or leading inexorably to the slow break-up of the present union with Scotland and Northern Ireland calling time on the present state of affairs.

Whatever the future let’s not deny that we are being sold a deceitful, disrespectful version of the past that allows Tory politicians and their fellow-travellers to avoid owning their own past, while whitewashing from history the collective efforts and struggles of the people of Britain who did together contribute to defeating Nazi genocide. We cannot let the Luftwaffle brigade get away with stealing our history and future.