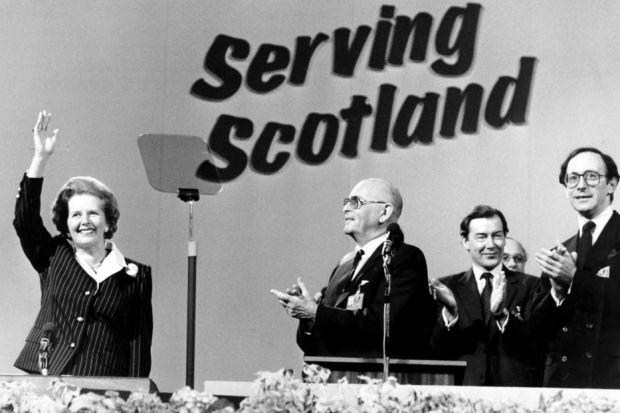 Margaret Thatcher looms large in the history of modern Scotland. Her minority rule of Scotland, her dogma and indifference to hardship and suffering, her English nationalism wrapped in the flag of the Union Jack: all this and more irritated an overwhelming majority of Scots.

She did change history here, although not in ways she intended. She underlined that the old union of compromise was broken; she weakened the strength of the unionist case; and she was a handmaiden in creating the Scottish Parliament.

Thatcher is pivotal to our political history and that of the UK, in that things were never the same again – for the Conservatives, Labour, the nature of the union, or British politics. She is central to understanding the trajectory of the UK over the past 40 years, the rise and fall of New Labour, and the collective stories and values we define ourselves by in Scotland.

It was timely that David Pratt on Thursday last in this paper made the case that Scotland should learn the lessons of defeating Thatcher in pursuit of defeating Boris Johnson and the Tories now, and aiding the cause of independence.

It is a good argument. But if we accept this invitation we need to get explicit and take appropriate lessons from our collective resistance to Thatcher and adapt them for the present. Here are seven takes from then to now.

First, the principle of democracy has to be at the forefront of any campaign. This is about Scotland’s right to decide its own future and to “say No” to the imposition of Westminster policies.

Second, following on from the above democracy cannot just be abstract – and left as that. Nor can it be sufficient to pose that Edinburgh is better than London, Holyrood more effective than Westminster. Instead, we have to embody a lived, pluralist democracy in the day to day government and administration of Scotland, and in that we have work to do.

Third, no one party speaks for of all Scotland then or now. That has to be recognised and nurtured. The 1980s leading party, Labour, had to come to terms with the fact that no matter how popular it was it was still, like others, a minority in votes and had to act accordingly – with humility and engaging with others.

The same is true of the SNP today, and real leadership recognises that by “letting go” to build alliances with others you can gain strength. Just as in the 1980s a devolved Parliament was never just about Labour and validating Labour dominance, so independence has to be seen as different from the SNP and Nationalist rule.

Fourth, this leads to the need to champion co-operation across party divides and beyond party. The campaign for a Scottish Parliament was given a huge boost by being cross-party in the 1980s and 1990s.

In the 1997 referendum Labour, SNP, Lib Dems, Greens and others came together in the campaign – expressing widespread support for a Parliament and minority support for the status quo, that underlined the extent to which Scotland had changed from the hesitancy of 1979. Wouldn’t it be great if the next cross-party pro-independence campaign could reflect a similar maturity – rather than the SNP front that was “Yes Scotland” last time?

Fifth, institution building is needed beyond the present ecology of social media platforms and small-scale initiatives. Independence needs independent bodies – standing apart from the claims of party, doing detailed research, making networks and connections, and exploring the different choices of independence. This needs to involve parts of Scotland mostly (with exceptions) uninvolved so far, including entrepreneurs, do-ers, trusts, and academia.

Sixth, the limits of progressive politics here have to be recognised. Not all our shortcomings can be blamed on others. Thatcher and Thatcherism in some respects gave us an opt out from this. In particular, it allowed the elites of public life to hide behind the rhetoric of opposing Thatcher and acted as a diversion from an honest, difficult conversation about where we don’t live up to the best of our values. A cursory look around contemporary Scotland will make anyone see we still need to do this – and that not everything wrong is directly about Westminster.

Finally, all of the above has to be outward looking, forward facing and internationalist – and not about settling past scores, revisiting the past, or wallowing in supposed “grievance politics”. That means focused on big stuff: Scotland’s re-emergence on the international stage, the tone and voice we speak in, making alliances, and recognising that the people of England are as misgoverned from Westminster as we are.

Words and language matter. Scotland’s resistance to Thatcherism spawned a rich vocabulary of Scotland’s position in the union and our collective opposition. The phrase “democratic deficit” was coined to describe the indefensible position whereby Scotland ended up with Tory Governments that had no real popular mandate here.

In a more evocative manner the writer William McIlvanney spoke of Scotland as a land of many cultures and identities: “a mongrel nation” and that defeating Thatcherism and the unreconstructed union entailed “Surviving the Shipwreck.” The present requires a similar rich set of metaphors from today’s writers, creatives and thinkers.

A final thought which has been running through this. The difference between Thatcher and Thatcherism sometimes got lost in the mix in the 1980s. While most Scots were repulsed by Thatcher and what she represented, many made the mistake of thinking her downfall led automatically to the defeat of ideas associated with her. If only this had been the case.

The Tories have now had eleven and a half years in office – the same length of time Margaret Thatcher occupied Downing Street. The latest Tory inhabitant Boris Johnson is increasingly recognised as a charlatan, clown and shameless bloviator – reaching levels of unpopularity in England seen with Theresa May and Jeremy Corbyn at their most unpopular.

Boris Johnson is a symptom of decline in public life, not the primary cause. He reflects the long-term decline of Toryism and its lack of interest in doing proper government and statecraft, as well as the decline of the British state and the case for the union.

As he fights for his political future, it is important to remember the bigger picture: of why we have ended up with Boris Johnson as PM, and oppose not just him as a politician, but the Tory Party, UK political system and union which has made this repulsive politics possible.