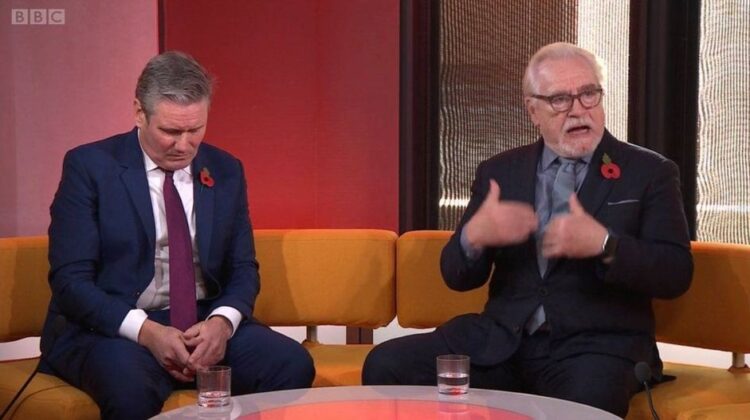 The past week has been one of the worst in British public life for decades as the scale of corruption of the UK Government and the Tories has been further revealed.

This should be a good time for Labour and Keir Starmer – the latter appearing on BBC’s Andrew Marr Show after a period in isolation due to COVID. Instead, Starmer gave an interview where his main takeaway was that the UK should shift focus from “Get Brexit Done” to “Make Brexit Work”: hardly an inspiring opposition line.

Then came Starmer’s set of exchanges with the Holywood actor Brian Cox – who used to be a Labour supporter and is now pro-independence. This revealed something about the state of British politics, the position of Labour, and where Scotland and independence fits into all this – with significant potential consequences for all these and more.

One critical element in the Starmer-Cox exchange was the tone and respect from both individuals. Marr asked Cox why when he had once supported Labour and now supported independence. Cox replied: “It’s a long story and it comes down to what I thought was a failure of social democracy. Also the Iraq war – that affected me. Blair’s hubris affected me. And I saw the party going in a certain direction and I was really very concerned, because I am a socialist.”

He continued about his loss of faith in Labour: “I totally agree with Keir on so many things, but my country was traduced for long enough, time and time again. We voted 62% to stay in Europe and we were ignored.  And if you think about the Thatcher years we were ignored. Scotland has always been sidelined.”

Famous actors talking politics doesn’t always work – and they can be challenging figures to offer any counter-view or criticism of, and Starmer had to choose his words and comments carefully.

Starmer – as you would expect from a Labour Party which has defined itself historically as conservative in how it does politics, views other parties, and sees constitutional matters in the UK – ruled out making any overtures to the SNP on independence pre-election, saying: “There is no basis for a deal before we go into an election nor coming out of an election.” This is predictable but foolish. Labour has to win a minimum 124 seats (on the old boundaries) to win a bare majority – and this is unlikely to happen.

What this means is that, post-election if the Tories lost their majority, Labour would have to win SNP parliamentary votes, and critically, pre-election – as in 2015 – deal with a Tory onslaught making hay of the prospect of a minority Labour Government in thrall to the Nationalists. Better to prepare for that Tory assault now by acclimatising Labour and voters to dealing with the SNP, but that sadly is not the Labour way.

The other takeaway is as big: the tone and feeling of how independence is talked about, and particularly presented to sceptical and English audiences. Cox’s tone was filled with a deep sense of sadness and regret for the passing of a former sense of a shared UK project which Labour at its best did much to build.

This was an elegy for a lost Britain – one that many older voters across the UK felt inspired by and trusted; which spoke not just of the common bonds across these isles, but about solidarity and interdependence. This past has been diminished and diluted not just by this Tory Government, but by successive Westminster administrations.

This tone and emotional intelligence was noted. The author Jonathan Rowson commented: “What I liked about this extract is that Brian Cox clearly has a view but it’s held with a certain amount of pain and regret at forsaking the UK. That’s where I am with Scottish independence too. It’s not right in some pre-ordained way, but it just feels necessary now.”

The Labour supporter Mark Perryman added: “Just look at Keir Starmer’s face as he listens to Brian Cox.” Pat Kane observed: “Cox’s point about Scotland’s pro-EU vote is the killer. Becoming more salient as the years pass”, while Gareth Young stated: “Starmer’s wishing that the audience wasn’t 85% English. He wants to make lots of nice promises and say that he’ll put Scotland first but he knows England is watching.”

Starmer was walking a tightrope as leaders often have to do, but various insights emerge from Cox’s remarks. Firstly, that language of regret and sadness is a powerful one on independence to a number of audiences: floating and sceptical voters, the rUK, and in particular, parts of England.

How Scottish independence poses its farewell to the UK/rUK has profound consequences. It should never be framed in triumphalist, self-satisfied tones – which we have seen with Brexit. It should avoid the mindset of saying good riddance and putting up two fingers to the rest of the UK.

A language of regret and sadness filled with an awareness of the good times and elegy for that lost Britain not coming back is both right and mature – also tapping into the deep feelings of resentment and dissatisfaction found across the rest of the UK at the state of things.

Secondly, the process of independence is to use that phrase “a process, not an event”. What Scotland makes of independence is already being in part shaped by the present, and the nature of any future farewell made in the here and now. Not only that, the tone and emotional intelligence of that farewell also determines the nature of Scotland’s entrance and re-emergence on the international stage.

The Starmer-Cox exchange offered many lessons. This is not to claim that Brian Cox is some sage who has got everything right in his political pronouncements, or not to appreciate the strategic challenges that Keir Starmer and Labour face. But politics is about deep issues and factors which only sometimes are openly talked about.

Not only do Labour need to think past their inherent conservatism and belief in one party Labour Government. But we need to understand the emotional undercurrents which independence brings up for many, and learn to speak with an emotional literacy – both about the positives, but also the challenges, confusion and loss that it brings up for many.