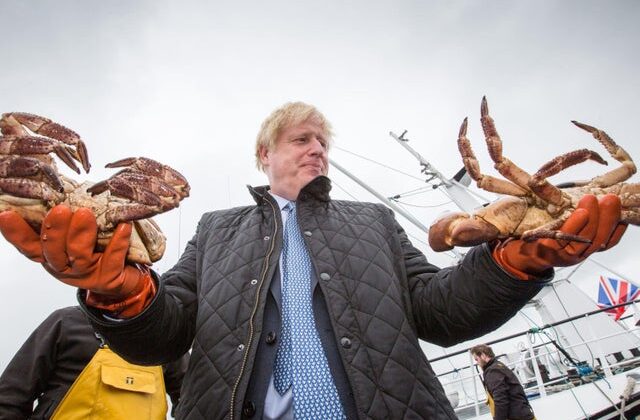 The state of the union and independence after Johnson’s Jaunt

Boris Johnson came to Scotland last week: much trailed and talked about but certain to have no lasting effect. This was the week where a once-revered Scottish institution announced it had fallen on hard times. Once popular with Edinburgh ladies of a certain age and the middle classes who believed that they had a refined taste and lifestyle; the similarities between Jenners department store on Princes Street, Edinburgh and the Scottish Tories, are many.

This illustrates the long-term collapse of the institutions of Tory unionism which once underpinned its appeal; given sustenance by church and religious belief, deference, working class Toryism, and the Britain of Empire. In the 1950s seven of Glasgow’s fifteen Westminster seats were Tory; it lost its last Tory MP in 1982. Edinburgh took longer to change but Labour’s seizing of the council in 1984 for the first time marked a sea change in the capital’s fortunes.

The decline of Tory unionism in Scotland has also been reflected in England. The right-wing site Guido Fawkes commented this week that: “The importance of the union is very much a hobby horse of Tory leaders rather than ordinary Tory voters.” Some unionist opinion is very angry with the Scots and Irish. Acclaimed novelist Louis de Bernières, author of Captain Corelli’s Mandolin, lashed out in The Times this week at both – declaring of Scotland that: “It is impossible to continue to love those who no longer love us.”

The decline of Tory unionism understanding Scotland: From Macmillan to Johnson

Where is unionism? All Tory PMs in recent times have had little idea of what to do about, and how to speak to, Scotland. This raises the question of who was the last Tory Prime Minister who related to Scotland, who respected its difference and traditions, and understood the union from a Scottish perspective? The answer is probably Harold Macmillan, PM from 1957-63 – the last Tory leader to preside over the Tories winning the popular vote in Scotland in 1959 UK election (while Labour won more seats). Every Tory Prime Minister since his successor Alec Douglas Home has governed without a popular mandate and with Tory fortunes increasingly ebbing – Heath, Thatcher, Major, Cameron, May and now Johnson.

Boris Johnson’s need to be seen to do something about Scotland is obvious from his viewpoint. In the weeks before this visit Tory insiders have floated various ideas. One was a Royal Commission on the UK Constitution; alongside conversations between Michael Gove and Gordon Brown on how to co-operate to save the Union.

There has even been talk in Downing Street of the nuclear option – of giving the Scots an independence referendum but on Westminster’s terms, where the UK Government presents a scorecard of the cost of independence and benefits of the union on a take it or leave it basis. This is meant to scare Scots into waking up and running back to the union. Not surprisingly senior Tories have baulked at such a risky venture.

Other wheezes include legislation which would require supra-majorities for major constitutional change in referendums. This was proposed by Alun Evans, head of the Scotland Office under Cameron. The problem with this is that it is partisan and restrictive of democracy, echoes 1979 and the 40% rule, and changing the rules after the horse has bolted and Brexit achieved major change on a 52:48 vote.

Then there is Gordon Brown on manoeuvres as always. Brown is viewed inside the higher echelons of Labour as a problem for the party. They know they cannot do anything major on Scotland or the UK constitutionally without his approval, yet they know that he is not exactly a team player and divisive even in the party. Labour have been mulling over a UK-wide Constitutional Convention for some time, but know it will be limited in potential if Brown heads it up.

There is a fundamental confusion at the heart of unionism on whether to challenge the Scottish Government’s right to speak for Scotland, or to embrace the road to reform and more powers. This divide can sometimes be seen in the same piece with for example Eddie Barnes, former adviser to Ruth Davidson, writing this week that: “The UK should be proud of the devolved institutions it has created” and a couple of sentences on that arch-anti-devolutionists “Michael Forsyth and Tam Dalyell were right” and the Parliament has been a catalyst for independence. Holding both sentiments shows a degree of confusion about the past 20 years and future directions.

There are no good options for the Tories. Trying to find the right language and attitude to Scotland necessitates that it is backed up by action. It is no good going on about vaccine roll-out and the sharing and pooling of the UK when it is also ‘the sick man of Europe’ with 100,000 dead – one of the greatest failures of domestic policy in the history of the UK and a humanitarian tragedy about which UK ministers have no idea how to respond to and to explain.

What Tories and even many progressives still fail to grasp is that all of this is not just about Scotland but about the many crises of the UK. The UK is one of the most unequal, unbalanced and – outside of devolution – centralising countries in the rich world. All of those characteristics are inter-related: the centralising British state has in recent times pushed through policies which have widened inequality, poverty and grotesque wealth.

A large part of the Westminster class still does not get that this is about Britain. Too many still pose it as a Scottish specific problem nothing to do with England or the atrophied state of British democracy, and think all of this can still be sorted by home rule for Scotland combined with warm words about the rest of the UK.

Large sections of the London establishment are so used to unequal Britain that they oppose even the slightest change to the existing order, even getting touchy about Johnson talking about ‘levelling up’. Clare Foges, a former Cameron speechwriter, stated last year that “London loathing has become an acceptable prejudice”; this week Martin Wolf in the FT raised the prospect of redistributing power and wealth as “destroying London”.

All of this when nothing is being talked of but the mood music of change. It shows that the entrenched political and economic interests who have so gained from the dysfunctional nature of the UK, its politics and capitalism, will fight to the end to retain their position and privilege.

It is too late for the Tory unionism which informed Churchill and Macmillan and played well to Scottish audiences. Churchill in the post-war era railed against the London centralisation of Labour undermining Scottish traditions; Macmillan articulated a union very different from that of Thatcher and current Tories, invoking “the union of the wedding ring not the handcuff.”

Tory strategists are playing a waiting game hoping the SNP will trip up, engage in civil war, or fail to win a sufficient mandate in May. Theresa May’s dictum “now is not the time” perfectly captured the playing for time in the Tory position: saying No as emphatically as they could for now, but not being completely absolutist. George Osborne last week conceded that if a referendum were held it would probably be lost by the unionists, hence he argued: “Refuse to hold a referendum. It’s the only sure way you won’t lose one.”

Beyond a war of attrition between the union and independence

Is this a war of attrition or can the UK or Scottish Government make a game changing move six years after 2014? Neither has yet fundamentally reframed its position, although the UK has regressed via Brexit and Westminster’s gathering of powers – which many Tories welcome, with Tory Henry Hill calling the increasing centralisation “an important reassertion of the prerogatives of the centre.”  Any UK Government move cannot be on Scotland alone and has to deal with the British state, its lack of democracy and its hard wiring in order to advance inequality and privilege, and would be a tough ask for the Westminster classes, Tory or Labour.

Independence has to not take victory for granted just because of the trend of polls. Look around Scottish public life: it is not in a healthy state. There is the damage of COVID; there is the limited nature of how the Scottish Government does things centralising and thinking it knows best; there is the fragile nature of the SNP itself and the tensions behind the Sturgeon-Salmond saga. All of this has contributed to a hollowed out politics and engagement where people feel unsure of the political environment and the engagement and hopes of the indyref have receded.

The above underlines the human dimension in our politics and importance of relationships built on trust. Acknowledging the above – the SNP and independence have to not cling to the comforts of command and control politics which give them succour and have some advantages in a pandemic.

A different politics from the one which got independence to 45% in 2014 and a majority now is required if support is to rise to 60%. That has to be a politics not just about the SNP, but one which encourages and practices self-government and a wider, more generous ownership of independence; which talks with an openness, generosity and even humbleness, and which does not fall into the trap of bitterness or self-satisfaction seen in places.

This will be a very different experience to the previous six years: an independence mindset which is comfortable with risk and disruption, and unlike the UK Government on COVID and Brexit, treats all of us as adults and partners in the national project that is independence. Independence has always been about growing up and maturing, and not surprisingly, in such a journey we should expect quite a few birth pains.