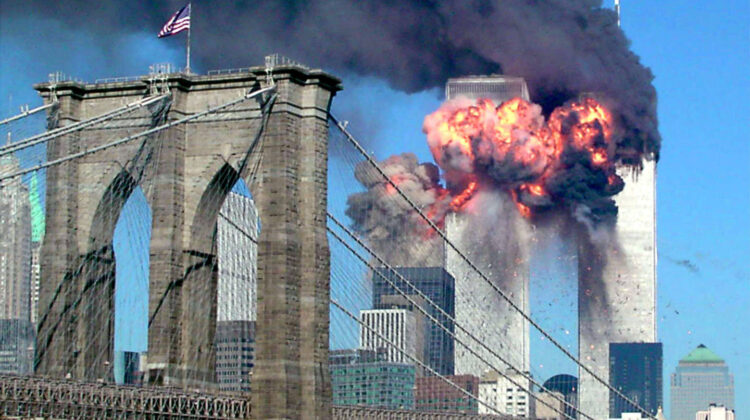 The World Turned Upside Down: Life after 9/11 and the West’s War Machine

Twenty years ago, the world changed dramatically on 11 September 2001 when al-Qaeda attacked the USA and overturned the post-Cold War assumptions of the West. Prior to this, in the decade following the collapse of the Soviet Union, the West believed in its in superiority with ‘the end of history’, ‘the clash of civilisations’, a belief in globalisation, progress and increasing prosperity. All were to be tested in the next two decades and found wanting.

The aftermath of that dramatic Tuesday twenty years disastrously illuminated the shortcomings of a shallow, arrogant group of Western politicians – most notable being George W. Bush and Tony Blair – who embarked on a crusade for liberal intervention and imperialism, invading Afghanistan and then Iraq.

The first was presented then, and subsequently, as a good war. However it lasted twenty years, cost billions, killed thousands of Afghans, and led the US into the longest war in its history – one its advocates wanted to continue for another 20-25 years. The second could never be claimed as a good war. It was built on brazen lies and deception, and led to the destruction of the fabric of Iraqi society, poisoning US and UK politics – and contributing to the rise of Trump and Brexit.

Two decades after 9/11 the world is messy, dangerous and unpredictable. It’s characterised by a jaded West which has lost patience in fighting ‘forever wars’; a raging populism against political elites weaponised by the lies of the War Party in the US and UK; and a US which now no longer sees itself as automatically ‘the policeman of the world’ after the over-reach in Afghanistan and Iraq: a sentiment which unites Trump and Joe Biden and most American public opinion.

The Middle East, two generations ago, was a region of hope, optimism and belief in pan-Arab nationalism, and is now rent asunder by conflict, division and failure: internal and external. There is the internal failure of Arab regimes to modernise and democratise, or offer any kind of guiding pan-Arabism for their populations. A stark fact is that the Arab world accounts for 5% of the world population – but 25% of the world’s displaced people and almost 50% of its refugees.

And there is the external failure which has seen the region reduced to a stage where external powers: the US, Russia, Iran, play out their geo-political rivalries. This has combined in the disasters of Western intervention and the failure of the ‘Arab spring’, leaving a host of shattered nations (Iraq, Libya, Syria, Yemen) while the West’s main strategic Arab ally is the brutal authoritarian regime of Saudi Arabia.

Twenty years after 9/11 the cost of permanent war is damning. First, the dynamics of Empire over-reach are never isolated in far-off distant lands but detrimentally affect those countries waging war who become more authoritarian and intolerant towards their own populations. Second, ‘the war on terror’ unleashed increasing attacks on civil liberties in the West, the emergence of the surveillance state and capitalism, and the widespread rise of Islamophobia.

Third, the nature of US militarism post-Cold War has to be recognised. Not only did the defeat of the US in Vietnam put a check for a period on American intervention, the existence of the Soviet Union was also a powerful constraining force. Post-Soviet Union, the US and the West felt emboldened to take out Saddam Hussein, expand NATO westwards and widen its influence into Russia’s ‘near-abroad’ (Ukraine and Georgia being examples). Fourth, this period coincided with a technological revolution in military affairs which meant the US believed it could fight light, surgical strike wars which could limit exposure to mass military causalities for the West – making them more palatable to the military and Western publics.

The West and the Middle East

Internationally, the hubris of the West showed the limits of understanding complex societies and the Middle East region through the simple lens of American neo-cons and evangelical mindset of Tony Blair. The Middle East is a vast region of many different countries and regions, shaped by European colonialism, the rise and fall of several Empires, and the failure of the post-independence era and idealism of leaders such as Nasser and Ben Bella.

Twenty years ago the West ignored the rich history of the region and its own flawed relationship with it. The UK has invaded Afghanistan on four separate occasions – 1838, 1878, 1919, 2001 – and Iraq on three – 1914, 1941 and 2003. It invaded Iran in 1941 and in 1953 toppled the democratic socialist government of Mohammad Mosaddegh because of his plans to nationalise Anglo-Iranian Oil Company (which later became part of BP). This British backed coup is often cited in the UK but seldom understood is that in 1921 and 1941 the British toppled previous Iranian regimes.

If Tony Blair had known his British history, or indeed Labour history, things might have been different in Iraq. Labour’s greatest leader, Clement Attlee, served in World War One, and was there at one of Churchill’s many disastrous military adventures – Gallipoli. If that were not enough he took part in the British invasion of Mesopotamia, then part of the Ottoman Empire, now in modern Iraq. As British forces advanced up the Tigris river having captured Basra – site of future British military humiliation post-2003 – Attlee was badly wounded at the battle of Hanna in April 1916 by shrapnel while attacking enemy lines, surviving to be shipped to India, then home. Subsequently he became mayor of Stepney in London’s East End, and later an MP and Labour leader.

Living in the shadow of permanent war and Empire leads to a dulling of the senses and memory. The scale of Western amnesia which exists around living in a society engaged in long-term military conflict is a central pillar of how the West denies what it is and does. Of course, this is nothing new to the UK. It ran a global Empire, and closer to home engaged in a thirty-year military conflict in Northern Ireland that its political elites managed to present as some kind of ‘other’ territory.

The culture of Empire breeds a refusal to admit mistakes. The recent brilliant BBC/Apple documentary, 9/11: Inside the President’s War Room, had a stellar cast of key figures in the US administration, including Bush. When asked if he had made any mistakes post-9/11, Bush paused and openly smirked, and batted away the question with the response: ‘I’m comfortable with the decisions I made’ which might sound like a deadpan line but the way he said it undermined any sense of serious reflection and statesmanship.

Such problem attitudes exist in a different way in the British military and political establishment. Simon Akam in The Changing of the Guard: The British Army since 9/11 points out the military have always shied away from accountability both strategically and operationally, writing: ‘The British military is an institution that struggles to engage with external criticism. The instinct to deflect rather than engage takes place internally too’, all aided by the class-bound, hierarchical systems of authority and promotion.

Twenty years on, we have to ask what has been gained by many years of war. Tony Blair to this day, and a host of neo-conservatives, believe that by waging permanent war they made the world safer for their civilians at home, irrespective of the disaster inflicted on Afghanistan and Iraq.

The even more illuminating question is what has been lost by twenty years of war? Hundreds of thousands of people have perished, several nations reduced to the level of warring failed states with the minimum competent governance, and the West’s lofty principles reduced to a sham. Not just that but the virulent xenophobia of elements in Western societies has unleashed a toxic Islamophobia, now normalised an unapologetic racism in the most ‘respectable’ circles – examples being The Spectator and the current Prime Minister, Boris Johnson.

Yet despite all this there is a naïve belief that the permanent war machine of the West has had time called on it prematurely. This view is present in the disappointment of the military and geo-political establishment. This groupthink needs challenging. Unless this happens, all of the West’s geo-political interests point towards future military interventions and conflicts: between the West and China, and between the US, Israel and Iran.

There is little to indicate that the West has recalibrated its understanding of its strategic interests and how it cohabits with powers such as China, Russia and Iran. Rather, the West is about military projection and intervention, and while it is currently constrained by public opinion and the Biden Presidency the self-interest of the military-industrial complex points to our societies remaining on a war footing, being psychologically and culturally programmed to need to identify and target enemies and engage in conflict.

Moreover, as Middle East scholar Fred Halliday acutely pointed out shortly after 9/11, there is a relationship between the rise of fundamentalism and nationalism in the West, Middle East and elsewhere: one the respective ideologies don’t want to acknowledge. Post-9/11 a simplistic American nationalism was given voice, which felt it had the right to go to any ends to avenge the wrong of the terrorist attacks on America, while al-Qaeda and radical forms of Islam welcomed this validation of their own importance. As Halliday wrote, ‘Around the world, the constraints of law and general moral decency seem to have been eroded … advocates of immigration and multi-culturalism are under attack … and in Eastern Europe nationalist demagogues hold sway.’ The road from Baghdad leads inexorably to Trump, Brexit and Orban.

The road not chosen after 9/11

Imagine a world in which Western powers had chosen a different path in 2001-2003 – chosen a negotiated settlement in Afghanistan over bin Laden, chosen to continue the policy of isolating Saddam Hussein, and critically, chosen through soft rather than hard power to support democracy, human rights and the rule of law across the Arab world and Middle East. It is surely near-certain that the world would be a better and safer place.

The Middle East would be in better shape, but so too would the West. The authoritarian, xenophobic tendencies of our mainstream politics would have been given less permission, while the degeneration of the right across the West and rise of populism would have been less magnified.

Not only, the huge global challenges which existed pre-9/11 and which have only magnified since – climate change, the threat of pandemics, global inequality and instability – could all have been more comprehensively addressed and an international architecture of co-operation strengthened. Who can really argue, for example, that world leaders and opinion would not have been in a better place coming in to COP 26 in Glasgow in November if the West’s twenty years of wars had not been embarked upon?

Yet, the path chosen by Western leaders post-2001 was not an aberration. While the West likes to demonise Islam and talk dismissively of rich, complex societies such as Syria, Iraq and Libya, and assert its simplistic worldview, it is not as informed and enlightened as it thinks it is. The West and its forces of modernity have always had a dark side – Empire, war, occupation and expropriation – and we still carry those values in our societies, as well as the noble traditions of 1776 and 1789.

Until the West can have an honest reappraisal about who and what we are, it is more than likely that in a few years a new generation of earnest leaders will be laying out the mission plan of how we must intervene in Iran or even engage in a stand-off with China. We must look at ourselves in the mirror and ask is this really who we want to be?