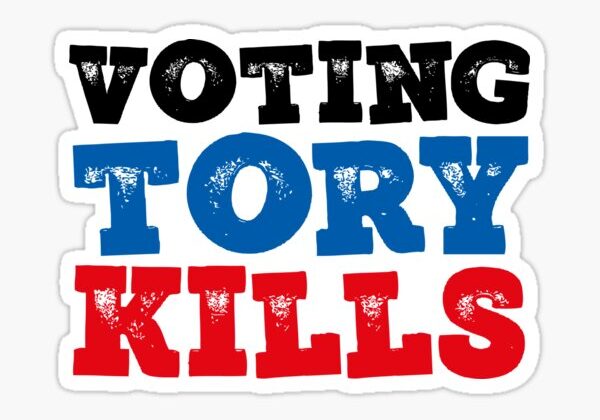 Toryism is bad for your health. Literally it kills

Boris Johnson and his administration have presided over the biggest domestic disaster to befell a UK Government in living memory – arguably since the UK began.

There have been terrible calamities before such as Blair and the Iraq war, Eden and Suez, Chamberlain and appeasement, Salisbury and the Boer war. But these are all foreign policy disasters which cost the UK’s reputation severely – and all saw military conflict in which many died including UK citizens.

The current Tory Government’s miscalculations, mistakes and arrogances has been on the home front as they continue to show a cavalier attitude for facts, figures, truth, science, evidence-based policy, and even for the health and well-being of the British public.

It has been revealed, as if anyone is that surprised, that Boris Johnson made contemptuous remarks about elderly voters, in effect writing off the over-80s. He said, in typical uninformed style, that the “median age” of those dying from COVID-19 was between 81 and 82 for men and 85 for women, concluding “Get COVID and Live longer.”

These outrageous comments appeared in a series of Johnson’s What App messages from October last year, made known by his former adviser Dominic Cummings, which Johnson and Downing Street have not denied.

These are not one-offs. There are dozens of grotesque and dehumanising remarks from Johnson on COVID-19 as well as on numerous other subjects such as his well-documented racist and sexist comments.

But this is more than just insensitive asides between then friends. The UK Government has been consistently caught behind the curve again and again. Dithering, delaying, putting off restrictions until the last minute, having to conduct sudden embarrassing U-turns, all while shamelessly and brazenly remunerating and rewarding their corporate cronies and pals.

The result has been a calamity which will stand as a watershed in British history. There are 130,000 ‘officially’ dead from COVID-19, hundreds of thousands suffering from long COVID and potentially long-term conditions and debilitating illnesses, one of the worst death rates per head in the developed world – while the UK economy the Tories keep going on about took one of the biggest hits anywhere in the rich world.

If this were not enough there is no sign of them learning in this pandemic from their mistakes. Already last year an estimated 25,000 UK citizens died because of the delays and procrastinations of Johnson and the Tory Government. The avoidable death toll of UK citizens whose lives could have been saved – if a competent, caring administration had sprung into action – will be much much higher. A death toll which can be put directly at the door of Johnson and his government.

Johnson is unfit for the most lowly office, let alone being leader of a government, and then one in the midst of a killer pandemic. Tory MPs knew who and what they were doing when they selected him to be their leader, going to a final ballot of members against Jeremy Hunt. All they were interested in was their electoral self-preservation.

Johnson is a serial liar, a clown and joker who believes in nothing but himself, who has conducted his public life based on his own advancement and instant gratification at the cost of having any enduring principles. He has proven himself a charlatan who as PM is incapable of leadership, detail, strategy, planning, consistency; or showing any real empathy, insight and care for others – or even interest in the lives of others.

This is all a given, and for many in the Tory Party who know him – such as ministers and the right-wing press – all this is cynically costed in. He may be a ‘shit”, but he is a winner and the voters, or enough of them, like and even in places love him.

The state we are in is much worse than the corrupt rottenness of Johnson. Rather this terrible situation is a direct result of the immorality of the Tory tribe, Toryism per se, and the British ruling elites.

The Tory tribe has provided three UK PMs in a row who have not been even adequate and have self-destructed while in office over major challenges namely Cameron and Brexit, May and Brexit, and Johnson and COVID-19. At least May had a sense of public duty and Cameron had the insight to pretend to go through the motions. Johnson seems to think that he can bluster through continuing crises but his days are increasingly numbered.

Yet the descent under eleven years of Tory rule has been marked. Old codes of public duty, public standards, competence and caring for public monies, decency and telling the truth, have all been abandoned and then openly trashed. The vicious logic that none of this ‘cuts through’ with the “Red Wall” voters of Hartlepool and Blackpool is an arms race mindset which takes politics into the sewer and even lower.

Toryism used to have a sense of civic responsibility and even a genuine social contract between the British ruling classes and the masses. It was predicated on the masses knowing their place and not getting too uppity, but across Peel and Disraeli in the 19th century, Churchill in the 1940s and 1950s, and Macmillan in the 1950s and 1960s there was a Conservatism which was not just about the upper and middle classes or the ruling order. Macmillan for example cared passionately about the living conditions of the working classes, and prioritised a massive nationwide programme of council house building in the 1950s, the like of which has not been seen again under Tories or Labour.

Those days are now long gone and we have to recognise this incontrovertible fact – that the older Toryism of a more decent society – admittedly hierarchical and oppressive in all sorts of ways – is not coming back.

Instead Toryism has descended into the cesspit of immorality, corruption and even lawbreaking (in the case of a host of senior ministers). It has become a vicious, venal outlook, based on spurious, abstract clarion calls of “freedom” and “sovereignty” – and bugger the consequences to the citizenry of the UK whether on Brexit or COVID.

The Tory tribe and its apologists and enablers in the media and public life think they can get away with anything. They have undermined, marginalised and attempted to destroy (often succeeding) alternative sources of ideas and opposition – whether it is the BBC, universities, local government, all institutions once central to the Tory story of Britain.

Tory grandees (if such a loaded word is still accurate about such an unprincipled gang) quietly calculate that they will put up with Boris Johnson until he stops proving a winner, and then ditch him – as they always do – for another potential winner with Rishi Sunak being the current odds-on favourite.

This will not change the dynamics and characteristics of Toryism. Boris Johnson may be odious in his words and actions and an outlier in moral debasement, but the disease has spread to the entire tribe. Toryism is the problem here: it is a sick, debased, corrupt, self-seeking set of practices at one with the kind of society they have brought about – one of the most unequal in the rich world – and the brutal capitalism which defines so much of our lives.

George Orwell got it right when he wrote about Toryism, privilege and private education in 1941 in The Lion and the Unicorn: “Probably the battle of Waterloo was won on the playing fields of Eton, but the opening battles of all subsequent wars have been lost there. One of the dominant facts in English life during the past three quarters of a century has been the decay of ability in the ruling class.”

This is the most despicable UK Government in peacetime history, lacking at any level in human decency, care and compassion for others. It only cares about itself, its maintenance and its interests. As serious is the rotten, self-regarding system of power and privilege which sustains this Toryism with Otto English observing in Byline Times: “We need to talk about class – and we need to call out the nature of this toxic elitism once and for all.”

The UK will for decades be defined by the periods of pre- and post-COVID. It has also been a watershed for the decline in the British state and government and standards of public life. And at the centre of this has been not just Boris Johnson, but every single Tory minister, MP, MSP and adviser. Each of them stands guilty of being responsible for the calamity which has been inflicted upon the length and breadth of the UK.

Remember this forever and never let anyone forget: Toryism kills.