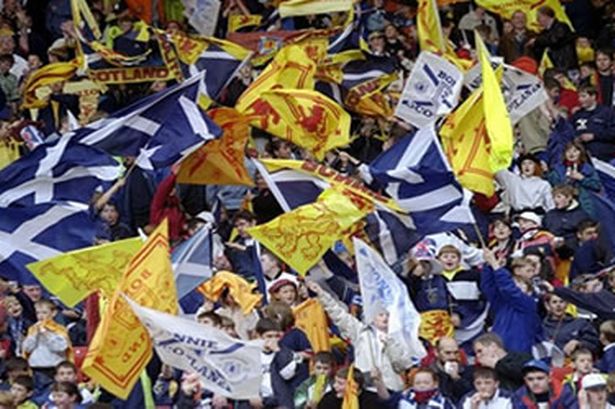 Singing for Scotland at Hampden, Murrayfield and Beyond

The songs that we sing individually and collectively in our hearts, homes and at public occasions tell us something – about who we are, our relationships with each other, and the society and nation we live in.

There are numerous different layers to this. There are the songs we sing and hum along to on the radio or on streaming devices; the golden oldies that remind us of favourite or not so favourite past moments; and then there are the collective songs we sing together to celebrate and define ourselves as part of something bigger.

Much commented upon, but seldom properly studied, has been how football crowds supporting the Scottish men’s national team have changed the songs they sung. Up until the late 1960s these huge crowds would sing along or listen in reverence to ‘God Save the Queen’. Then they started to get restless and began booing. And then they started to sing what became an unofficial anthem, ‘Flower of Scotland’, to the point eventually that ‘God Save the Queen’ was dropped and ‘Flower of Scotland’ officially adopted before games.

This all happened very quickly and occurred through football fans showing what they thought of the British national anthem, first being told they were being discourteous and to show respect, until the authorities knew there was no turning back and ditched ‘God Save the Queen’. The same eventually happened at a slower pace with rugby at Murrayfield.

This is both significant and symbolic and at the same time does not automatically indicate what political shifts lie underneath – on the constitutional question, party affiliation or voting behaviour.

It does represent some kind of shift though which does need exploring. Magnus Linklater in The Times on Monday – faced with thousands of Scots bursting into the bars of ‘Flower of Scotland’ at Murrayfield on Saturday as the Scottish team battled to an impressive 20-17 victory over England – felt a degree of discomfort about what it all meant.

From this he equates the cocktail of powerful emotions at Murrayfield to a caricature of Scottish nationalism: ‘disgust with everything English becomes visceral, and to be Scottish is deeply, palpably, almost despairingly, the only thing you want to be’, concluding: ‘Is this how Yes supporters feel the whole time? If so, I totally understand.’ It is a frightening picture if it were true, only corrected by the fact that the main body of modern Scottish nationalism over the past 50 years has borne little resemblance to this.

There are a set of tropes connected to Scottish identity which are trundled out and are just plain offensive about the English and trying to justify anti-English sentiments. This is though not unique to any political tradition but found across the spectrum and society – Scottish nationalist, unionist, belonging to neither, left, right, centre and even the most apolitical.

Unionists used to be so comfortable in their Scottish identity that some felt they could take out their prejudices on the English. And part of Scottish identity has been made up of not being English, and thus for some this being expressed by anti-English prejudice.

The Power of Song

What underpins the singing of songs at Hampden and Murrayfield is a shift in the idea of what people think Scotland means, entailing a reclaiming and remaking of public space and culture and how that relates to being a nation.

This does not narrowly lead inexorably to independence but does inform a lived experience of what Scotland is and makes it the territory, culture(s) and nation which defines people(s) and place(s) in a distinctive way. Not to the exclusion of other identities here, and not to the exclusion of the place of us beyond these shores. This long-term shift has been a tail wind which has informed the rise of the SNP and of independence coming in from the cold, but it is not owned by any political tradition. Rather it is a challenge to all parties and political viewpoints, culture, media, civil society and businesses to respond to this changed Scottish landscape and give it form, expression and tangible ideas.

Just before the shift began on the terraces of Hampden Park with ‘God Save the Queen’ another musical change began in Scotland. At the end of the 1950s and early 1960s a folk music revival began aided and encouraged by the likes of Maurice Blythman and Hamish Henderson.

This contributed to a generational shift in politics with the emergence of a new wave of youthful student protest, the rise of CND and the anti-nuclear issue – in Scotland due to the sighting of US nuclear weapons at Loch Fyne in March 1961 and which played a part in the first electoral signs of popularity by the SNP long before Winnie Ewing won Hamilton.

A contributory factor in this strand of radicalism coming together, holding rallies, being visible and seen as a movement were anti-nuclear songs such as ‘Ding Ding Dollar’ and the legendary ‘Freedom Come All Ye’ which drew from that folk scene and revival. These even spawned a Folkways Records release, aided and supported by Pete Seeger, called Ding Dong Dollar: Anti-Polaris and Scottish Republican Songs issued in April 1962 – the first ever musical release of anti-nuclear songs anywhere in the world.

One can overstate this and be too determinist but the songs we sing and choose to sing at public gatherings matter. Iain Hamilton, the Scot who made history bringing the Stone of Destiny back from Westminster Abbey to Scotland on Christmas Eve 1950, had a fine line about this. He wrote in 1991, when looking back on a life of rebellion, challenging power and a changed Scotland:

Nobody sang in Scotland in the middle part of the century. To be more correct, those who sang did not derive their songs from Scotland. Their sources were foreign and what they sang was only an alien copy of other peoples’ ways of life.

He saw a very different Scotland in the early 1990s compared to the past:

Now everyone sings Scottish songs, and if I were a unionist politician of whatever party, but especially of the Labour Party, I would be counting the songs, rather than the votes. The people who make the songs of a country, have a habit of making the laws also.

This observation might be a bit too sweeping, sentimental and determinist but it contains something profound. It is too romantic and essentialist for sure but Hamilton is surely right when he writes that the songs we sing matter and perhaps are as important as the votes we weight and count.

Scotland has some serious work to do about lots of things. About the impact of devolution, twenty years of the Scottish Parliament and how it does things and indeed what it does, the nature of the SNP after fifteen years in office, our social justice credentials in a land where we do not consistently or effectively act upon them while giving the pretence that they are what make us what we are.

The latter point has been true for far too long – indeed as long as I can remember – and has been expressed by the present-day SNP, Labour when it was running Scotland, and the nation pre-Parliament which defined itself in opposition to Thatcherism.

In all the above, one strand has come to the fore and was completely missing from Linklater’s piece: the limits of a politics dominated not just by Scottish nationalism but the competing claims of two nationalisms, the other being British nationalism.

Several decades ago, in the Scotland up to the 1960s, unionism had such a sense of itself and its place that it was comfortable understanding itself as a nationalism and even a hyphenated form at that – ‘unionism-nationalism’ in the words of historian Graeme Morton. This unionism claimed all sorts of icons, symbols and myths as part of unionist Scotland which it would not dare now: Bruce, Wallace, Burns, the Declaration of Arbroath. The reasoning was that they had all contributed to the making of Scotland as a nation which then had the self-confidence to create with England the union of 1707.

To paraphrase ‘Flower of Scotland’, ‘these things are past now and in the past they must remain’. That glad, confident era of unionism has long gone, replaced by a nervous, defensive, hesitant expression whose only hope seems to be creating a bogey man of bigoted Scottish nationalism: that is after all the consistent framing of Gordon Brown.

Yet the rise and dominance of Scottish nationalism is not the end of the story either, but merely one part of a longer journey. It has aided our debates in recent decades: the arrival of the Parliament, the independence debate, and a remarkable flowering of culture and creative expression. But on the big questions of the day and the future it has, as a tradition and outlook, little to say of worth.

This is true the world over. Nationalism is never enough in newly independent nation-states or in older, established countries. Scotland has to get past the competing claims of our two nationalisms, one out and proud, the other in denial it is such a thing. We need to be able to find the spaces, traditions, values and philosophies which address and speak to the Scotlands of the future.

Who knows what that would sound to sing at Hampden, Murrayfield or in a small folk club, but if we can give voice to a post-nationalist Scotland (post-Scottish, post-British) including in song then it would be one small step on the road to living in that future.