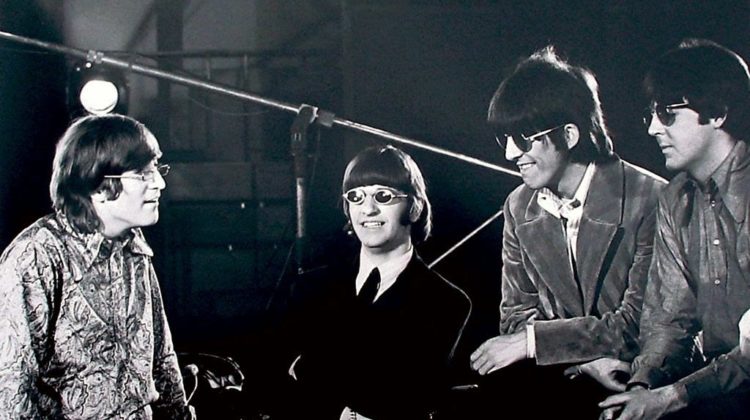 The Beatles, the Sixties and what happens to music after the virus?

Next Thursday one of the landmark anniversaries of popular music and culture occurs: the 50th anniversary of the public break-up of the Beatles when Paul McCartney broke the unexpected news.

The dreams and hopes of a huge swathe of young people and generation who had grown up with the Beatles as the world around them dramatically changed would never be the same again.

Leaving aside that the Beatles had to all intents already broken up before McCartney’s announcement, but not made it public, this announcement brought a final, dramatic closure to a tumultuous decade. Its mythology would only grow through time, but at the end of the 1960s there was already a feeling of dark storm clouds gathering –from the deaths at the Rolling Stones-Altamont concert to the Charles Manson-Sharon Tate killings.

This anniversary invites us to ask what is the importance of the Beatles, the sixties and why do they still seem to be central to so many? How long can one band carry so much investment and cultural weight in what amounts to a kind of canonisation?

What does it say about the times, culture and music since those heady days that the 1960s still seem to matter? Once this might have been thought mostly a generational story – about babyboomers not letting go of their youth, but subsequent generations have bought into this story as well. Remember ‘Britpop’ and some of its participants going on endlessly about the sixties as just one example?

If all of this reflects as much on music in the intervening five decades, there is not only the question of what it says about now, but what it might offer in the way of clues for the way music in the future will develop – and critically, music after the coronavirus?

The sixties never really left us and never properly ended. Rather a never-ending procession of participants and observers have since continually told and retold the same stories of what a time it was to be young, alive and there. As the years have passed many of these accounts have grown arms and legs, as folk have become more dewy-eyed about the day that ‘Sgt. Pepper’ was first released and everyone supposedly opened their doors and windows, when Dylan played Manchester Free Trade Hall, or Hendrix came to town.

The role of nostalgia, collective memories and continual creation of anniversaries (like the Beatles 50th) are used to sell stuff – often repackaging the very items we already own. The market in selling ‘classic albums’ is one of the main ways the faltering music industry can still sell physical product by producing bigger and bigger box sets. The Beatles are part of this with 50th anniversary box sets of ‘Sgt. Pepper’ and ‘The White Album’ – and coronavirus permitting – ‘Get Back/Let It Be’ later this year.

The Beatles were of course a phenomenon the like of which had not been seen before or since. It is impossible now to imagine from the vantage point of post-Beatles Britain the effect they had on culture, music and society.

Pre-Beatles Britain 1962 was a stuffy, ossified, hierarchical society where the officer class of the war were still in charge, Harold Macmillan was Prime Minister, and young people and the working class were meant to know their place.

The Beatles came front stage and blew the doors off much of this.  There was John Lennon’s 1963 remarks in front of royalty to ‘rattle their jewellery’; the unprecedented fact that Lennon and McCartney wrote their own songs; and that their first film, ‘A Hard Day’s Night’ from 1964, directed by Richard Lester, is a brilliant, funny and irreverent take on stardom and Beatlemania which stands the test of time today.

Then there are the songs. These morphed over the course of eight years from dazzling expressions of the pop genre (‘She Loves You’, ‘Please Please Me’) to exploring social situations and the minutiae of real life (‘She’s Leaving Home’, ‘Eleanor Rigby’), to songs which pushed into the psychedelic and magical (‘Tomorrow Never Knows’, ‘Strawberry Fields Forever’). And all this while the four characters of the group – John, Paul, George and Ringo – exuded a charm, wit and lack of deference, which had rarely been seen in TV studios and radio before.

The Beatles were unique, but like all unique forces they didn’t do what they did in isolation. They came about at a critical point of change in post-war society. There was the end of national conscription in 1960, the emergence of satire with the likes of ‘Private Eye’ and ‘TW3’, and a younger generation with more money in their pockets, and an aspiration to do more and kick against that old order.

The suffocating deference of that Britain, which still had continuities with Victorian times in terms of sex, relationships and what could be talked about in public, was crumbling in the early 1960s. There was the ‘Lady Chatterley’s Lover’ trial of 1960 where Penguin were charged with obscenity over publishing D.H. Lawrence’s classic and found not guilty; the Profumo affair and the Christine Keeler trial of 1963, and the death of wartime leader Winston Churchill in 1965.

More than this they personally and culturally epitomised in the 1960s a different set of possibilities. The writer Hanif Kureishi recalls what he thought of the group and what they represented when he was growing up in the 1960s in London: ‘The Beatles became heroes to the young because they were not deferential: no authority had broken their spirit; they were confident and funny, they answered back; no one put them down.’

This touches on such powerful currents as independence, freedom, creativity, and a younger generation throwing off the shackles of a society of elders which said to millions a depressing message which Kureishi and others implicitly understood – that no matter your talents if you were born working class there was little chance of you amounting to anything other than factory fodder or bringing up a family.

The Beatles were a generous, optimistic expression of something more than that – one which was in its musical forms quintessentially English and Northern English while speaking to a wider Britain. In this they may be the last musical artists of stature and significance who were able to give voice to these qualities.

Other profoundly English artists did not have the same optimism. The music of the Kinks and Ray Davies had a tangible loss and regret for a past age; the Sex Pistols in the 1970s were filled with an explosive anger and sense of rebellion; while in the 1980s the Smiths and Pet Shop Boys evoked a wistful melancholia about deeply buried emotions and feeling different.

The Beatles after the Beatles became an even bigger cultural canon, incorporated into an establishment which has once dismissed and sneered at them and all popular music. Instead, the Beatles became part of the ‘official’ story of what made Britain ‘great’ – from the illusions of ‘cool Britannia’ to the delusions of presenting the UK as a classless society and meritocracy.

The Beatles incorporation was aided by Lennon’s retreat from music in the 1970s after his radical political phase, followed by his brutal murder at the age of 40 in 1980. In a different way, McCartney’s continual desire to present an affable people-pleasing persona also aided this – even though it masked his never-ending quest to seek out new musical forms and experiment up to the present. I am not talking about Wings, but his ‘Fireman’ albums with Youth as but one example.

This was part of a wider reclaiming of pop culture from the forces of imagination, change, rebellion and even young people – a generational defeat by oldies going on about how marvellous it was when they were young. Such comments should be an incitement to cultural revolution – but not as of yet!

This begs two questions – where in this age of conservatism and conformity is the music of the future, and how will things change after the coronavirus pandemic?

In past decades there were sometimes obviously, sometimes in the margins, music which not only sounded like nothing else, but could be described as the music of the future. This is the experience that music writer Jon Savage had when listening to Joy Division over forty years ago. He recognised that it came from the Manchester of the late 1970s, the doubt and despair of then, and that it spoke and represented something from another age and time which could be called the future.

This is the experience many of us had when first listening to Elvis, David Bowie, Kraftwerk and others, and for me as well as these artists, groups such as the Bronx based sisters who formed E.S.G. – one of the most sampled bands in music history who sadly hardly sold many of their own records. In recent years the R & B sci-fi of Janelle Monáe would be another pioneering example of music from another world.

For most of this century, with notable exceptions such as Janelle Monáe, such music has been conspicuous by its absence. Is that cultural chasm set to continue given the many other forms of expression and entertainment available to trigger and challenge the imagination, as well as the hold of retro-culture?

The world is not going to be the same after the virus, and neither is culture and music. In these tragic times the loss, dislocation and disruption which has happened across society is going to provide an opportunity to do things very differently – at a macro-level about the big important stuff.

Music will be no exception to this. Maybe we can start – along with all the other things – to think about music that isn’t about corporate sponsors and control, a mainstream which is about nothing but brands, merch and monies, and the endless procession of festivals which are not really festivals. Music gatherings with their grotesque range of VIP packages are a perversion of everything the original, democratic promise of rock and roll was about; they trash and diminish what American writer Barbara Ehrenreich has called our sense of ‘collective joy’.

Music is part of what it is to be human  – part of our universal common language which connects us across the peoples, nations and continents of this planet – and makes us something bigger – touching upon what musician David Byrne has called ‘the geometry of beauty’.

All through the age of recorded music it has tapped into economic and social challenges – from the Great Depression and folk and protest songs, to the 1960s era of new openings, 1970s revulsion at the deadening realities of life across the West, and liberation and freedom in the best of hip hop, dance and club culture in recent decades.

The search for music to answer something inside us which connects us will never go away. Corporate behemoths cannot fully answer the desire deep in the human imagination. Nor can continually being stuck in a permanent ‘Year Zero’ of the past, reminiscing about the Beatles and 1960s, punk and new wave, or even for some, the ‘Britpop’ of the 1990s.

Rather the search for the songs and sounds which give voice to our desire to celebrate our need for independence, freedom, creativity and autonomy, while also marking our interconnectedness, will go on. We are not going to stop the music now or at any point, but after what has been called ‘the Great Levelling’ of the coronavirus, we really do need to as humanity dance to a different beat.