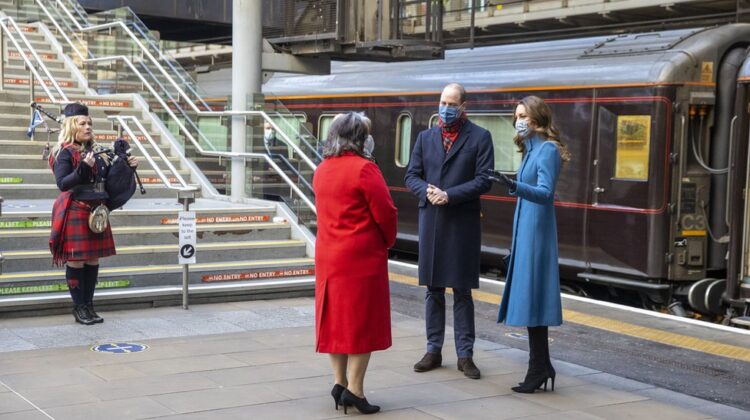 The Great Big Lie of the British Royal Family

Feeling a bit blue as the nights grow colder and darker? Worried about all those avoidable COVID-19 deaths and the threat of a chaotic Brexit? Are you worried about Boris Johnson and his hapless government being in charge of anything – let alone a vaccine roll-out – as they shamelessly reward their corporate pals with billions of our monies with no due process and diligence?

Never fear because such inauspicious circumstances are the perfect conditions for a royal tour. And not just that, but a ‘Royal Train Tour’. With the Queen and Prince Philip getting on, and Charles and Camilla not that popular, and Harry having run off, the task has fallen on the young shoulders of William and Kate. They already have a hashtag for the 1,200 mile three day tour (#RoyalTrainTour), and a branding with an image created by a budding young artist namely 10 year old Joe Whale.

We should ignore the fact that it has only taken the royals nine months into a pandemic claiming the lives of at least 60,000 of their loyal subjects to think of this latest wheeze to show how important we are to them. After all we do pick up most of their bills and provide them with their role, status and all the stuff like palaces and estates.

In a script reminiscent of something from ‘Monty Python and the Holy Grail’, Kate and William will visit all three of the four nations of the unhappy kingdom (sorry Northern Ireland for now) that will eventually be theirs. Think of it as a preview tour, as they view their grateful, happy people who don’t have much going for them at the moment – what with COVID-19, Brexit, Boris Johnson, job worries and more. In such circumstances at least we know there is still something we can count on. It is only the vacuous smile of a royal laying a healing hand on the suffering and mouthing the blatant lie that ‘it is all going to be okay.’ It really isn’t, but what more do we expect and want?

For one, the entire British Royal Family machine is based not just on mysticism of the Python ‘Holy Grail’ school. More so, in its everyday existence and exchange with the British public, it is based on one Great Big Lie that forces us – the public – to collude with it, diminishing ourselves in the process.

What is that lie? The lie that we can engage in emperor-worship and voodoo ceremonies and monarchy as Britain’s last form of mainstream state religion; that we can keep a historically random family centrestage, and pretend none of this has consequences for everyone. All of British public life is deformed and bastardised by the Great Big Lie. The UK is not a fully-fledged democracy; it is not even a nation but rather a union of four territories, all of which is disguised by the cloak of the Crown. Everyone who comes into contact with monarchy has to engage and reinforce the lie: the deference, the pretence that this doesn’t matter and does at the same time, and that of course, Britain’s compulsion to celebrate its backwardness makes us somehow different from elsewhere.

Look at how the BBC, ITV and SKY currently cover Thailand where there is an ongoing bitter struggle between democratic forces and the power of the Palace and monarchy. They laugh at the mumbo jumbo and faux pomp of pro-royal ceremonies, and those who profess faith in the wisdom of the emperor. Have they had a look at the propaganda BBC royal correspondent Nicholas Witchell has pumped out his entire journalist career in defence of the institution?

We have our own Cults of Personality around the royals – although the attempt to ‘modernise’ through reinvention as soap opera and the younger generation of the House of Windsor has ended in disaster with Diana’s rebellion and death, Charles’ deceptions, Andrew’s scandals (the Queen’s favourite son), and Harry making a break for freedom and going ‘woke’ in California. Tom Nairn’s brilliant expose of the royal enterprise, The Enchanted Glass, called this period ‘the expanding mass illusion of intimacy’, and he predicted it would not end well for them.

On top of it all they have suffered the ignominy of Netflix’s The Crown: a series which has dared lift the veil from the secrecy and collusion of Britain’s elites around all things around Her Majesty. No wonder she, or at least her courtiers and flunky apologists, are furious. After nearly 80 years on the throne as Queen, as UK society has changed dramatically and challenged all sorts of conceits, finally someone blows up the Great Big Lie.

Even that august publication The Economist came to the defence of The Crown (the series) against The Crown (the institution) and a UK Government having the brass neck to say the series should carry a truth warning as fiction. As they pointed out this was a bit rich for a government known for serial lying on Brexit and more, and maybe they should concentrate on telling the truth on the important stuff they are responsible for. And the royals are intrinsically, as The Economist observed, a ‘purveyor of fiction’ – pointing out that ‘The Windsors constructed their own happy-family story, which turned out to be less true than the fictionalised tale of dysfunction and despair.’

Here is a radical thought for Britain/Ukania 2020. That we stop defining this country and set of nations from the top down. That we stop imagining and defining the UK from the royals down. We are not there for them. We are not their playthings. And they are not there for us: to placate us, heal us, or help us in any way. They are a distraction and a fossilised relic. They are part of the problem and get in the way of solutions. Britain as an idea and place is not a modern country, a democracy, or a place where we are its citizens. This can never be our home as long as there is a UK Royal Family.