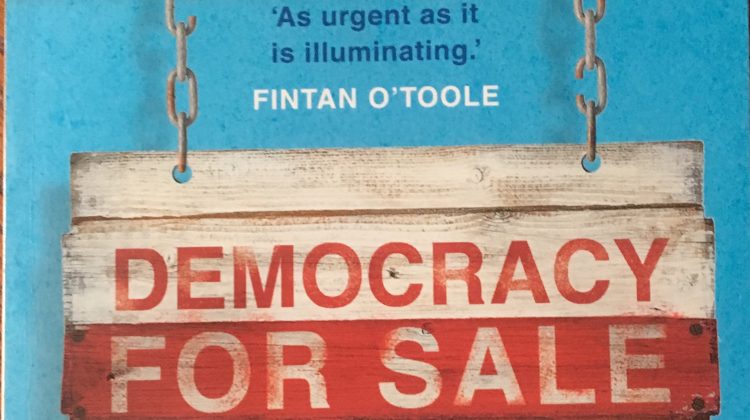 British democracy likes to see itself as among the cleanest and least corrupt in the world, run by good chaps whose word can be taken in good faith and is their bond.

This was always part myth but increasingly what passes for democracy in the UK not only no longer confirms this in any way, but the whole system is not in good health. This has been confirmed by the shockwaves of Brexit, Boris Johnson and his government, and their disastrous record on COVID-19 – but it goes much deeper and the malaise is much more serious.

The challenges to democracy in the UK are many. There is the rise of corporate power and money alongside the emergence of business men (it is always men) who think their wealth allows them to bend, shape and break rules; the issue of dark money funding a host of right-wing causes including UK think-tanks; and the inadequacy of legislation and regulation in keeping up with the changing political and technological world.

This environment is the subject of a new book – Democracy for Sale: Dark Money and Dirty Politics by Peter Geoghegan – which deserves to be widely read and debated, and taken as a wake-up call. It looks at the state of the UK while also drawing from the rise of authoritarian right-wing politics in the US with Donald Trump, and Viktor Orbán in Hungary.

Geoghegan, based in Glasgow, believes that what has gone wrong is not just about legislation or regulation not being adequate. Rather, he contents: ‘This is not just a process point. There is a much bigger picture. There is a crisis in representation and democracy in the UK. Politicians and even the public make light of it by constantly comparing ourselves with the US – and thinking because of this that we are fine.’

He cites a study from earlier this year: ‘In a Cambridge University 2020 study I cite in the book the two countries with the highest dissatisfaction in their politics were the UK and US. What do these two share in common? A First Past the Post system which encourages being polarised – and which says to many voters that their vote doesn’t count.’

Even more fundamental is what UK and US capitalism and society have become: ‘More than this there is the influence of money and power and being able to buy access to politicians and decision makers. The crisis of democracy can be seen across the world – but is particularly pronounced in the UK and US.’

The litany in recent years in the UK of democratic abuse is a long one. There was the breaking of electoral law by the Brexit campaign – Vote Leave and the Nigel Farage led Leave.EU. There was businessman Arron Banks and the mysterious origins of the millions he gave the Leave side in the Brexit campaign still never fully explained. And there was the strange case of the role of the DUP in Northern Ireland acting as a front for Leave monies to get round British electoral regulations – a story Geoghegan was central to breaking.

The DUP case saw the loophole in Northern Ireland electoral law (which allowed donations to be kept secret) used to funnel £435,000 from the mainland, under the cover of the DUP to the Leave campaign, via a front called the Constitutional Research Council and Scottish Tory Richard Cook. The law in Northern Ireland has subsequently been changed but this was a classic story of right-wing skullduggery and finding legislative gaps to exploit in a way never intended.

There is the secretive funding of right-wing think-tanks in the UK. Bodies such as the Institute of Economic Affairs, Centre for Policy Studies, and Policy Institute who present themselves as respectable and position themselves to be influential with politicians. Mark Littlewood, head of the IEA, is unapologetic in the way he talks with deliberate obfuscation about who funds the body he heads up.

There are issues around charity law – with most think-tanks claiming charity status and being subsidised by the taxpayer: an irony probably lost on the Taxpayers’ Alliance. There is a direct correlation between the rise of corporate power and inequality in the UK and US and the emergence of a market of right-wing think-tanks jockeying for position and influence – and peddling simplistic deregulation and corporatisation as the answer which coincidentally suits their secret funders.

These set-ups have had a disproportionate impact on Conservative government politics in the past decade – savaging ‘the nanny state’ and regulation and posing a fantasy world of free competitive markets. This is an ideologically dogmatic view which handily reinforces the financial self-interest of the businesses who underwrite them in a set of incestuous, questionable relationships they all prefer to keep from public eyes.

Policy Exchange was the venue for Matt Hancock’s recent announcement of the abolition of Public Health England (a stance long advocated by the think-tank) and its replacement by a new body – the National Institute for Health Protection – which will be centralised and corporate business friendly and led by the hapless, but loved by the Tory Government, Baroness ‘Dido’ Harding.

There is the shameless dispersal of public contracts and monies during the pandemic to outsourcers such as Serco and Deloitte and a host of significant awards to entities with Tory and Brexit connections. These all involve multi-million pound deals with no scrutiny or accountability and shrouded in secrecy, due to the catch-all defence by UK ministers of ‘corporate confidentiality’.

One symbol in the decline of public standards and rise of systemic corruption is the House of Lords: now the second biggest legislature in the world only beaten in size and patronage by China. The debasement of the Lords – a place once dominated by hereditary peers – went into hyperdrive with the creation of life peers appointed by the sitting PM which has made it even more grotesque and an affront to democratic norms. It is a place that failed politicians turned out by voters are recycled and achieve an afterlife as legislators – Tory and former Secretary of State Michael Forsyth and Zac Goldsmith, Lib Dem Lynne Featherstone and Scottish Labour’s Katy Clark being examples.

Boris Johnson’s recent list of peers – including family, friends, Claire Fox (ex-Revolutionary Communist Party turned Brexiteer) and Ruth Davidson (who will take up her seat next year), was just another milestone in its decline into farce and national disgrace. And this list was not as bad as it could have been with several Tory donors knocked off the list by the appointments committee.

Tony Benn calculated that the seven PMs pre-Thatcher – Clement Attlee to Jim Callaghan – saw the creation of 639 peers: 19 per year. Thatcher presided over 216 peers (18 per year) before it exploded under Blair to 386 (38 per year).

Figures from the House of Lords show that in the fifty years since life peers were created in 1958, 1,242 peers were created (24 per year). These figures illustrate the acceleration of patronage into the Lords which has been used to create a substitute political class – which takes us to Boris Johnson’s list that will unfortunately not be the last word in how low standards can go.

This is the British state which is playing hard ball on a future indyref – saying that it isn’t democratic or responsible to have another vote. It underlines that the UK has no proper processes for deciding on referendums and how they are held; the Political Parties, Elections and Referendums Act 2000 (which created the Electoral Commission) being long out of date and from an analogue pre-digital era of politics. Witness the shambles and political chicanery of the Brexit vote – and yet the UK governing class think they can still lecture others.

Scotland does not have the debasement of political and public culture seen around Westminster but it has practices which are cause for alarm. For example, one way by which corporates, business interests and insiders exert influence is via lobbying government.

Our regulatory system is not as robust and transparent as it could be according to Willie Sullivan, head of Electoral Reform Society Scotland, with it having ‘a nod to the principle that we should know who, when and why rich and powerful interests seek to influence public policy and legislation in their favour, with a statutory public register of lobbying’.

But critically it allows for all kinds of exemptions and ways round the legislation he says: ‘It excludes emails, phone calls, zoom (unless the camera is on) and any meetings where the lobbyist has been invited in by the politician’. The Lobbying Register Act is currently being reviewed by Parliament, something Sullivan welcomes, but there has to be wholesale change in how we see such vested interests work, observing: ‘Trust in our institutions is a basis of democracy and if we can’t see who is influencing public policy then trust is difficult.’

Democracy is under attack the world over including in countries which pride themselves on their democratic principles and traditions such as the UK and US. Donald Trump is threatening to run a horse and cart through the US Presidential election and do literally anything, including inciting violence, to remain in the White House.

In the UK no parliamentary inquiry was held into the abuses of the Brexit vote, while the scale of dodgy Russian oligarch monies at the top of politics and the Tories is a national scandal which should shame the governing party – but which until now they have been able to minimise delaying and then burying the report on Russian interference into UK politics.

There is urgent need for reform of UK democracy. It won’t come from the Tories who gain from the current rotten ancien regime. Labour and Lib Dems have shown consistently the inadequacy of their reform credentials. Indeed, the Tories want to make the system even less fair with talk of abolishing the Electoral Commission and curbing judicial review – which saw significant victories against government overreach on Brexit – and reasserting the absolutism of parliamentary sovereignty. Watch out Scotland and everyone on that.

The UK is not in a healthy state but this is a global contest as campaigner George Monbiot says: ‘Without strong civic institutions, society loses it power. From the point of view of global capital, that’s mission accomplished.’ In a week when Apple’s market value passed that of the entire FTSE 100 at $2.3 trillion there is an international struggle between the forces of an increasingly unapologetic monopoly capitalism and the forces of democracy who have to restate the case for markets and corporations being held legally and ethically accountable.

The British state wants all of us to feel powerless and helpless in the face of the corporate leviathan. But the first act of resistance is recognising the collective power we have which the elites fear. We have tamed irresponsible capitalism before and can do again. To do so we need to recognise the widespread threat to democracy and act to renew it.