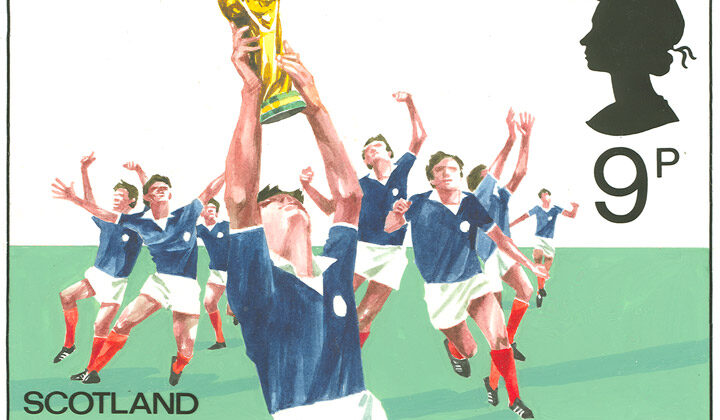 Imagine a world where the Scotland men’s national team were not only occasionally very decent and even sometimes very good at football, but actually contested and succeeded at the top of the international game – and had the ability to win the FIFA World Cup.

Think about it for a second. Not the practicalities or whether or how it could be attained. Or the fact that it involves an element of fantasy. But rather what effect such an achievement would have on the national game, but also on how we see and think of ourselves as a nation and society.

If Scotland won the FIFA World Cup it would be a historic watershed and defining point for many in this country way beyond the football field. This for a country where our men’s national team have appeared at eight World Cup finals, and three European Championships, and have never qualified for the second round. That consistent record of underachievement has been the case for all the great Scottish national teams that have contained many talented and skilled players.

A Scotland team that were winners and victors in the ultimate football trophy in the world would be a validation, vindication, and a tipping point and continual reference point ever after. Even more than this it would offer the chance of being a kind of liberation – of Scotland appearing on the international stage as a serious competitor and a footballing country comparable to the other countries that regularly win things and turn up at finals.

Other examples of small successful countries can point to what it would feel like for Scotland. One is Uruguay – a South American country with a population of only three and a half million people – yet which has won the World Cup on two occasions in 1930 and 1950, the second in Brazil where they beat the hosts 2-1 at home in the decisive game.

Another is Croatia with a population of just over four million people; a relatively young country that became independent from the former Yugoslav federation in 1991 and entered international football in 1992. And in this short period of time Croatia have caused ripples – qualifying for five out of six World Cups and six out of seven Euros. Most impressively, Croatia reached the last World Cup final in Russia in 2018, losing to France 4-2 in a match filled with drama, skill and controversy (and which Croatia could have won).

These two examples provide uplifting and empowering national stories for Uruguay and Croatia, and show that small sized states can compete and overcome much bigger nations – and sometimes triumph and win. These stories validate their societies, their national folklore, and inspire young players to think that they can succeed and compete with the big and powerful.

Scotland does have examples of past international success that can offer some lessons. There is Celtic FC’s story of winning the European Cup in Lisbon in 1967 – the first ‘British’ team to do so and the most significant triumph in Celtic’s long and impressive history.

Yet this moment in the sun also shows the dangers of living with past triumphs and sometimes being trapped by them. Celtic’s 1967 victory, and how it has been subsequently reaffirmed and romanticised as part of the club’s exceptionalism, has another element in that Celtic or any other Scottish club can never realistically repeat it. In this there are echoes of how England has never stopped talking about winning the 1966 World Cup, and being unable to deal with never coming near again as demonstrated by ‘thirty years of hurt’ in the 1996 ‘Three Lions’ song.

Seeing yourself on an international sporting stage is a cathartic experience and a defining moment for the players, fans, and the wider community – whether club or nation – that reaches out and touches society. This happens on a number of levels, one being the power and reach of media representation that offers a glimpse into how your club or nation looks to others across the globe – reflected back in ways that can be empowering and enriching. This offers the chance of transformation and even a liberation of perceptions, expectations, and of the mind, creating new national stories and new international ideas of representation.

When Scotland were world champions

Here is one radical thought on all of the above – Scotland can act like international champions at football because they have been champions. That is not a false statement, but one of fact. International football now has its own FIFA ratings based on a team’s previous performances and while these began in recent decades, the Elo ratings which were calculated in 1998, estimated that between 1876 and 1890 Scotland regularly topped the rankings – and were the best international team in the world. A reality check here: at this point in international football few teams were actually competing but still we were top of a very small pile.

If that were not enough, in the same period Scottish football in the form of Queen’s Park, the Glasgow Southside pioneers, not only won ten Scottish Cups (still the highest for any club other than Celtic or Rangers) and reached two English FA Cup finals, losing both. As Scottish Cup winners they were invited to play the winners of the English trophy but this involved travel and cost issues, and the first meeting of the two cup champions occurred in 1878 when Vale of Leven played the Wanderers at the Oval in London and won 3-1, earning them the unofficial title of the club champions of the world.

A world where Scotland were World Cup champions sounds like a pipedream, but the point is that we have already been champions and top of the world. Not only that, we have defined and shaped much of what became the modern game – based on passing and teamwork rather than dribbling (known at the time as ‘combination football’: a precursor to the ‘total football’ of Dutch football in the 1970s) – through in particular the ‘Scotch Professors’ of Mount Florida who took the genius of Queen’s Park and spread it around the world.

Firstly, we need to know our own histories and stories and what have been our triumphs and achievements better. We can then reflect on the impact our nation has had in the world of football – and in more important and crucial areas such as industry, science, innovation and ideas.

Secondly, we could in all of this learn to relax and recognise our huge contribution to the world. The fragile, bitter aspect of part of Scottish identity and culture, and always fearing threats and seeing ourselves as having to struggle for visibility and validation, could be overthrown and discarded – if we want to. We have perhaps overdone that aspect of our experience too much.

Finally, a Scotland that has been world champions would know something profound about us – and our inner strengths. That if we have the will, effort and determination we can achieve in ways that are more important and long lasting than football. The question is do we really want to be serious about who we are and what we stand for, and do we really want to embrace social change and the values we claim to believe in, and espouse and advance them?