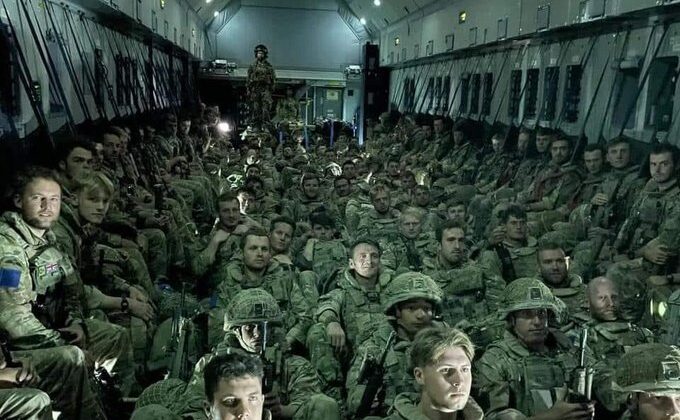 Afghanistan, “forever wars” and the reality of Empire State Britain

The news of the past couple of weeks has been filled with the humiliation of US and UK forces in Afghanistan alongside the humanitarian tragedy unfolding before our eyes; an upsetting wake-up call to those who have become normalised to the permanent war machine of the West and the 20 years of “forever war” in Afghanistan.

Rather than reset their assumptions, the war elite have looked on aghast at the decision of US President Joe Biden to withdraw from Afghanistan – abiding to Trump’s agreement of February 2020 with the Taliban. This political, military and media class in the US and UK have grown even more complacent and arrogant over the past 20 years, believing in their own self-importance and worldview, aided by the bankrolling of billions of pounds on a conflict the West could never win.

One of the biggest issues in the reaction to the Afghan pull-out – which is meant to be completed by today (31 August) is what this says about the UK, its place in the world, its military, and how it does (and does not do) accountability. Not only has the UK been at war in Afghanistan with little to show for it, this is a place that the UK has now invaded on four separate occasions – 1838, 1878, 1919 and 2001 – without bothering to know much about the country or learn from previous UK mistakes, including past humiliations such as 1838.

The liberal imperialists believe that war can be used as a force for Enlightenment values and for spreading democracy and freedom. Joining Tony Blair and George W. Bush in the cavalcade are a host of centre-left voices such as the Washington Post and New York Times who are furious at Biden, and Thomas Friedman, supposed ‘guru’ of liberal globalisation, who in the immediate aftermath of the Afghan invasion of 2021 penned a piece declaring “give war a chance.”

The UK’s actions have been informed by delusions which inform foreign policy, specifically in Afghanistan and Iraq. We were told these were “good wars” which have only gone wrong through events and that the principles underpinning them were somehow sound.

Running through this has been the blind faith of UK politicians and military clinging to the US – “hug ‘em close” in the words of Blair to UK ambassador to the US Christopher Meyer in the run-up to Iraq. Thus, the UK had in April 2021 armed forces in a staggering 46 countries around the world which is admittedly fewer than the global reach of the US. This at a time when the British Army is at its lowest numbers since the onset of the Napoleonic Wars.

To underline the UK’s misplaced geo-politics, the aircraft carrier HMS Queen Elizabeth has recently sailed to the Far East and the UK has recently opened a permanent military base in the Gulf. Both of these are motivated not by the UK’s immediate interests, but rather to serve the projection of global power of the US.

The UK’s armed forces believed that, going into Afghanistan and Iraq, they had a proven success at counter-insurgency, particularly in densely built-up urban centres, drawing on thirty years in Northern Ireland. Yet this misreading of “the troubles” is imbued with the arrogance which comes with continually misreading the UK’s colonial experience in the likes of Kenya and elsewhere. This is a track record of not bothering to understand the people, histories and cultures of the places the UK operates in, which contributed to the defeat of British forces in Basra in southern Iraq and Helmand province in Afghanistan.

Military elites are meant to learn from successive conflicts, but this has not been the case in Afghanistan and Iraq. The latter has been presented by the military as a political failure, with the near-entirety of the House of Commons joining together to praise “the brave, courageous armed forces”, rather than dig deeper into the morass. This would entail exposing the military shortcomings of the UK in senior leadership, logistics, planning and equipment – and how the rank and file military see the still class-bound top brass.

Some of this was touched upon by Chilcot on Iraq, but it dodged the central question – the illegality of the war. As stark, despite 20 years of Afghan operations by UK forces and 457 UK military deaths and countless others, there has been no proper comprehensive inquiry into the British intervention in Afghanistan and what went wrong. The British military have a culture of avoiding and ducking accountability, hiding behind the protective glow of believing in the good of a country’s armed forces: an attitude employed to cover-up numerous disasters from Dunkirk and Singapore in World War Two to more recent debacles.

Above all, the Afghan operation and 20 years of “forever war” illustrate profound home truths about the British state. Permanent war and military interventions come at a cost to the society waging them as well as the countries being invaded. Professor Colin Crouch has stated that the UK post-9/11 shifted from “a welfare stare to a warfare state” – one centred on solidarity and social responsibility to one defined by the brute power of the neo-liberal economy, market forces, and the military.

The elite version of the UK will not change without some kind of rupture or radical shift. Thirty-three years of Labour Government have not managed to dramatically alter how the UK sees and projects itself on the world stage. In the past twenty years, the UK has grown even more captivated by the illusion that Empire and imperialism were good things. Only this week pro-Brexit historian Robert Tombs made the selective statement that “the British Empire was the principal enemy of slavery”: part of the revisionist right-wing project History Reclaimed.

Right-wing historians like Tombs might not like it but the UK was and remains an Empire State and Empire at its very core is about conquest, power and expropriation. It is high time these realities were recognised, so that they can be finally challenged and overthrown, and time called on the UK living in the age of 19th century gunboat diplomacy.